Cardinal Herranz, The Pope’s Investigator -- From Medjugorje to the “Bubble” of Vatileaks 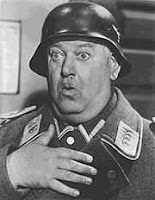 Bishop Schwarz's photo: © Pressefoto Bistum Linz
Posted by Tancred at 10:02 AM No comments:

Editor: We were right about Father Corapi. This railroading going on is what's happened to many a loyal, orthodox priest over the last fifty years. Turns out that his loyal "fan club" also had a certain genius of the laity about him. It is also apparent as of the writing of the explanation by Father Michael Sullivan JCL, that the network gone wrong, can probably line up for some serious crow since they weren't actually required to remove Father Corapi's broadcasts based on an as yet unsubstantiated denunciation, and have put the protestant Billy Graham on in his place.

As mentioned below, Father Corapi was not treated fairly according to the canon law.

Fr. John Corapi has been suspended from priestly functions because of an accusation against him from a former employee. There seems to be a great deal of speculation and confusion regarding what this entails.

When an accusation arrives at the desk of a Religious Superior or a bishop, the procedure calls for a quick, confidential assessment as to the veracity of the accusation. With the advent of the Dallas Procedural Norms the necessary pieces of information required before imposing administrative leave varies from diocese to diocese and Order to Order. In most cases, if an accuser knows the name of the priest, the location at the time of the alleged incident and the year the priest was serving, the accusation is considered “credible.” The accused is supposed to be provided with the opportunity to respond to the accusations in a face-to-face meeting with his Superior prior to the imposition of suspension or administrative leave. In Father Corapi’s case, this never happened.

When a priest is on administrative leave he is to refrain from any public actions as a priest, such as offering Mass or hearing confessions, or from dressing as a priest in any public forum. The decree from his superiors clearly spells out limitations upon Fr. Corapi, but does not preclude him from speaking publicly provided he does not dress as a cleric and does not offer Mass publicly. Fr. John Corapi has observed these directives. Church bodies are to observe these limitations, though the order does not apply to lay organizations or Church organizations beyond the scope of what has been decreed.

Several Catholic media sources have removed Fr. Corapi from their outlets. This is over and above what is required by canon law and the Dallas Norms. Nothing in the order placing Father Corapi on administrative leave precludes distribution of previously recorded materials. Santa Cruz Media is in full compliance with Canon Law and the administrative leave under which Fr. Corapi is functioning.

Fr. Corapi is doing all in his power to cooperate and work with his Religious Society to see that this allegation is quickly cleared up and he is allowed to return to full ministry. The length of this administrative leave is strictly up to the Society and their process of inquiry before a decision is rendered.

We continue to ask everyone to pray for Fr. Corapi, for the accuser and for a quick resolution to this matter.

The Legionaries of Christ leave founder-worship behind... 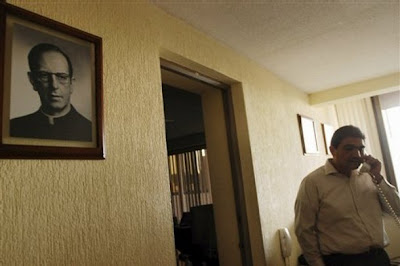 (Rome, Italy) The official website of Regnum Christi has just posted a news piece about new norms that they put in place in regards to how they will deal with the memory of their founder, Fr. Marcial Maciel.

Here are the new rules listed on the R.C. site:

- In institutional writings, the way of referring to Fr Maciel will be as “founder of the Legion of Christ and Regnum Christi” or simply “Fr Maciel.”

- It is confirmed that photographs of the founder alone or with the Holy Father cannot be
placed in Legionary or Regnum Christi centers.

- Dates having to do with his person (birthday, baptismal day, name day, and priestly ordination anniversary) are not to be celebrated. The anniversary of his death, January 30, will be a day dedicated especially to prayer.

- The founder’s personal writings and talks will not be for sale in the congregation’s publishing houses, centers, and works of apostolate.

- The crypt of the Cotija cemetery with the mortal remains of the Maciel Degollado family, Fr Maciel and other Legionaries of Christ and Regnum Christi consecrated members will be given the value that pertains to any Christian burial place. It will be treated as a place of prayer for the eternal repose of the deceased.

- The retreat centers in Cotija will continue offering the same services, but a place for prayer, reparation, and expiation will be created there.

The Absurdity of Lay Investiture 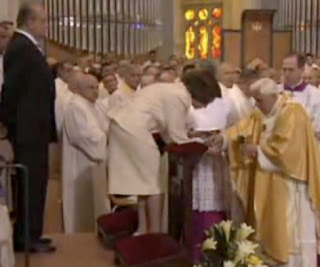 This is the photo the press should have shown. Photo, here...

Things have gotten significantly worse since Napoleon Bonaparte took matters into his own hands: 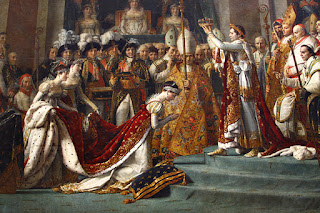 Posted by Tancred at 3:04 PM No comments: