The body of Christ should no longer be given to the hand.  This was determined by the archbishop of Kampala, Cyprian Lwanga, the capital of Uganda, according to the internet portal katolisch.de in a "Decree on the proper celebration of the Eucharist".  The prescribed oral communion should prevent abuse with the Holy Host.  "In addition, the distribution should only be done by priests in proper official garb.  Cohabiting but unmarried couples are excluded from the Eucharist,” it says.

Contrary to other statements of the Internet portal, an agreement with the Bishops' Conference is not necessary.  Each bishop is his own and responsible top shepherd of his diocese and is not bound by any instructions from a bishops' conference.  A diocesan bishop would only be bound by a general decree adopted by the majority of the conference and reviewed by the Apostolic See (can. 455).  Even if agreements within a bishops' conference make sense for a uniform pastoral approach by the bishops, a bishop ultimately only has to follow God and his conscience in his pastoral service.  The next higher instance of a diocesan bishop is not the Episcopal Conference, but the Apostolic See.

Edit: I could have said, bishop of the margins, but he’s much bigger than that.

Trans: Tancred vekron99@hotmail.com
AMDG
Posted by Tancred at 11:43 AM No comments:

Edit: no muss no fuss. 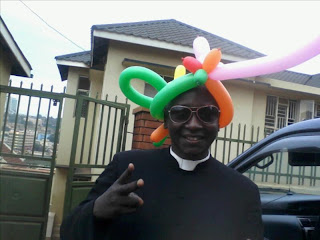 The Priest Anthony Musaal has  addressed a letter on March 12th to the Bishop, clergy and laity of Uganda, demanding the rectification of the alleged gap between the ideal and reality of priestly celibacy in black Africa, through the lifting of celibacy. Archbishop Cyprian Kisito Lwanga of Kampala has suspended the priest because he has discredited the Church and the clergy.

Tolerance for Diversity and Intolerance

Tiberias Haredi Jews want segregated bus lines so that "males and females may sit on seperate sides of the bus" and that they may be generally seperated from non-religious Jews. We like this. We hope the religious Jews beat the non-religious ones, as one interviewee feared would happen, on the head with the Torah.

Someone in Liberal Oregon can't understand, or appreciate cultural diversity, at least not the domesticated kind of diversity one might appreciate on a planned and disneyfied cruise and tour of Uganda. It irks him that somewhere, someone else's truth isn't the same as his for the Ugandan government is getting a democratic law passed which will punish homosexuals with death. It's not exactly the kind of democracy we had in mind though here at the epicenter of cultural niceness where some values are more equal than others.

Perhaps what we need is to get newly Knighted Patrick Stewart and Ian McKellan on an away team to discuss tolerance and diversity to the Ugandan people, that is, even before economic sanctions hit and Ugandan children might starve in order that the 5-10% of our population that really values these things can feel less impotent than they usually do.

Then perhaps they will understand. Even the usually morally moribound Anglican Church is supporting this legislation which was once, more or less, a standard in European societies, at least until the French Revolution came along.

Uganda has banned radio adverts by witches but before you go around criticizing and getting all superior on the poor Ugandans, we do too, except we tend to call them psychics or palm readers.

Our enthusiasm for Uganda increases when we see that the government not only takes swindlers like fortune tellers to jail and prevents them from preying on ordinary people, but it even takes care of false versions of Catholicism, like the Brazilian Catholic Church, which permits its ministers to marry. Like the Old Catholics in Europe, they have quite a few problems with adult supervisions. By comparison, the Roman Catholic Church worldwide, though considerably less corrupt than the cannibal conference of the United Nations, and all of the heresy we talk about that it does suffer from, is nothing.
Posted by Tancred at 7:56 AM No comments:

Kampala City is the Place you Oughta Be! Uganda.

We understand that real-estate prices in Uganda are very low, and they probably aren't due for another political upheaval for at least another 20 years. With legislation that rankles the effeminate files of the world's global elites like this, it's enough to make some of us want to embrace the possibility for change and take a chance in a new world.

As Episcopalians in America were electing their second gay bishop, their Anglican cousins in Uganda were embroiled in controversial legislation that would make would put those bishops in prison for life, or condemn them to death.

The legislation being considered by the Parliament of Uganda, which outlaws "any form of sexual relations between persons of the same sex," punishable by life in prison or death, threatens to further divide Episcopalians, some of whom have left the U.S. church and aligned with the Anglican Church of Uganda and other anti-homosexual African communions.

It's also putting other U.S. religious leaders, from Jim Wallis to Rick Warren, in the unusual position of commenting on political matters in other nations.

Homosexuality already is illegal in Uganda: The Penal Code bans "carnal knowledge of any person against the order of nature," with a possible penalty of life imprisonment, but prosecutions are rare because the standard of proof requires that offenders be caught in the act. According to Foreign Policy magazine, the proposed legislation would make it easier to catch and prosecute offenders:


And a Senior Anglican prelate in Uganda is backing his sensible government. No doubt, the ever dissembling media will trot out vague racist statements to slur the government of Uganda.
Posted by Tancred at 1:21 PM No comments:

A lot of liberals are complaining about the fact that the Anglican Communion isn't denouncing support for some real Anti-Gay Legislation in Uganda on the part of its local Bishops, and witch hunting isn't considered passe there either, since witchcraft is a punishable offense.

A bill currently before the Ugandan parliament (pdf) proposes seven year prison sentences for discussing homosexuality; life imprisonment for homosexual acts; and death for a second offence. Sober observers believe it will be passed. The Anglican church in Uganda appears to support it, and the Church of England in this country is absolutely silent. The Archbishop of Canterbury and the Bishop of Winchester solemnly denounce violence in the Congo, where they have no influence at all, but on Uganda they maintain a resolute post-colonial silence.

The position of the Archbishop of York, Dr John Sentamu, is more complicated, and his silence more eloquent. He is himself Ugandan by birth. One of his younger half-brothers, pastor Robert Kayanja, is a highly successful pentecostal preacher in Kampala, running a church called the Rubaga Miracle Centre. Such people are highly rewarded, and the business is extremely competitive. A rival preacher, the gloriously named Solomon Male of the The Arising Church was accused this spring of kidnapping Kayanga's assistant and torturing him for five days to get him to confess that his boss was gay and partial to young men.

The admission would have been social death. Come to think of it, under the new law, it would be physical death as well.

Uganda Witch Doctors Banned from Advertising on Radio in Uganda

Ugandan witch-doctors have used radio up to now to advertise their healing powers. However, this could soon be a thing of the past. The government's ethics minister, James Buturo, has said that radio stations are contravening the 1957 Witchcraft Act and "...are promoting witchcraft-related activities to the detriment of Uganda's integrity".

Witchcraft remains a major problem in Uganda and the government is keen to stamp out its promotion in the country. Radio, with its huge audiences, is key to its plans.