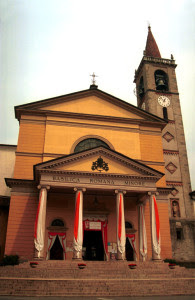 (Milan) In Missaglia in the Italian Archdiocese of Milan (Lombardy) unknown individuals violently forced their way into the parish church of San Vittore.  This church has the designation of a Papal Basilica Minor. They broke into the tabernacle and stole the Most Holy Sacrament of the Altar.  Otherwise they took some sacramental upbeats, among them a bronze cross, a small shrine and the door of the tabernacle.

There is a weighty suspicion that the perpetrators were either acting for or were Satanists, because besides the Sacrament no valuable objects were stolen.  The object of the act was clearly the body of Christ.

Pastor and Community are horrified: “The financial damage is the least, only the door of the tabernacle door which was ripped off, had any clear value.  Most horrible is the sacrilege, the profanation of the Blessed Sacrament.  The perpetrators took with them what was most valuable for the faithful, the consecrated body of Christ.  An act, which is difficult to discuss and has wounded us deeply”, said Pastor Albino Mandelli.

The crimes took place on the 5th of April in the morning and was discovered by the sacristan.  The Diocesan authorities were immediately informed.

How hard is it to put an alarm in the Sanctuary near the Tabernacle? Not hard at all. More can be done to protect the Blessed Sacrament. Much more.

I know some parishes are more technologically advanced than others. It may also be that they disarmed the alarm or there was inside assistance as well.

We have CCTV in our local parish. You can see the tabernacle 24/7 by simply visiting our parish website. It's cheap and it's effective.

This Satanist must be stupid. He did not have to steal a Host. He only needed to get in line at the local Novus Ordo and stick out his paw. That is what most other Satanists do. Maybe this wasn't done by those they think.

It's more efficient to steal many at once and commit an act of sacrilege as well.

Also;
Satanists
Are
Poopy-Heads
This is coming from an (open minded) agnostic.

(The heads of poop allow them to evade detection)