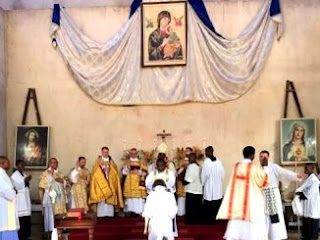 (Abuja) On 15 August, the feast of the Assumption of the Virgin Mary a first Mass was celebrated in Nigeria in the Immemorial Roman Rite.


Monsignor Gregory Ochiaga, the emeritus bishop of Orlu ordained Deacon Charles Ike from the Priestly Society of St. Peter to the priesthood. The priestly ordination took place in the parish of Enneemaka of Umuaka, which is supervised by the Society of St. Peter. Umuaka is located in the state of Imo.
Nne Enyemaka is Igbo, the language of the people of the same name who live in southeast of Nigeria, and stands for Our Lady of Perpetual Help. A copy of the Roman image is revered in the parish church built by the Society of Peter. The construction work is still ongoing.
The parish was established by the incumbent Bishop of Orlu, Augustine Uwuoma as a personal parish for the Extraordinary Form of the Roman Rite.
It is the first priestly ordination in the Immemorial Roman Rite, which has been offered in Nigeria since the liturgical reform of 1969/1970.
If you are interested in the church building project, you can find information on fsspnigeria.org.
Text: Giuseppe Nardi
Image: fsspnigeria.org
Trans: Tancred vekron99@hotmail.com
AMDG

"The Army of Mohammed is Awakened" -- Some Dead, 45 Destroyed Churches: The Price of Satire

(Niamey) A high price was paid for the printing of the Muhammad caricature on the front page of radical left-wing satire sheet Charlie Hebdo. A price that others had to pay, not by the print makers in Paris. While the West, particularly the France of Hollande's "republican march"  insisted that troding on the religious beliefs of others, the bill of the media mockery of human life is presented elsewhere. A bill that is paid at  thousands of kilometers distance with the blood of those whose only "fault" is to confess Christ. The deadly interaction between Islamism and relativism could be hardly more  brutally expressed.
In a message to the nation, which was distributed on 17 January,  Niger President Mahamadou Issoufou announced that four burned bodies were found in the remains of burned churches in the capital of Niamey. A fifth dead was found in Zinder where last Friday a wild rally against Charlie Hebdo spun out of control. In total, there are at least ten dead. With a hail of stones, Muslim protesters hurled stones at police before them. Two more churches were burned in Maradi, one in Gouré, three  in the capital alone where twelve of fourteen Catholic churches were "profaned, pillaged and destroyed," as Archbishop Michel Cartatéguy reported with tears in his eyes. "Everything is burned, it is nothing more, everything is in ruins and ashes," said the archbishop to Vatican Radio . A total of 128 injured people have reported injury. 189 people were arrested.

A total of 45 churches were invaded, destroyed and set on fire. There were five hotels and 36 restaurants as well as the orphanage of a Christian school. The figures clearly show the violent anti-Christian thrust. Bibles were torn up and burned in the street. Subsidiaries of French companies were devastated and French flags burned. The French Embassy urged all Frenchmen explicitly not to leave their homes.
The capital's cathedral was secured with great difficulty through a police cordon against attacking Islamists. Although the authorities had issued a ban on meetings,  a thousand Muslims tried to storm the Episcopal Church. They carried banners that read: "The army of Muhammad has awakened" and "I sacrifice my father and my mother for our prophets."

Or is Life Just Satire?

"Those who persecute the Christian,  understood nothing,"  said   President Issoufou trying to smooth everything over. Interior Minister Hassoumi Massoudou announced that among the demonstrators, flags of Nigerian Islamist Boko Haram militia appeared. The victims in Niger (17 million inhabitants, of which 80 per cent Muslims) as in other Islamic countries, have no personal guilt. They have no share in those who regard the disdain of religion as "law", despite  and in spite of all. Do the many dead touch the conscience of those who are scribbling around with their pencils in the air?  Whether someone asks pardon of  the Christians of Niger or at least sympathizes with them that mourn their dead and mourn before the ruins of their destroyed churches? Or, for some is life just a satire after all?
Text: Giuseppe Nardi
image: Koachi.com (screenshot)
Trans: Tancred vekron99@hotmail.com
Link to Katholisches...
AMDG
Posted by Tancred at 6:05 AM 8 comments: 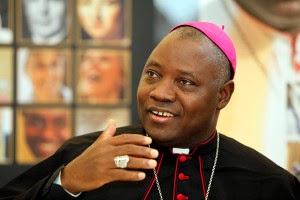 To the law against "gay marriage" said Archbishop Kaigama: "We say very clearly: We don't hate anybody. We respect homosexuals as people, and we support them when their rights are violated as a human beings. The Church has there then and defends them. But we also say quite clearly that homosexual acts are contrary to nature. They flatly contradict what we defend. Powerful organizations who blackmail our government would like us to legalize gay marriage.  And when they say that there are occasional homosexual tendencies in Africa, we say quite clearly that they are aberrations. We respect the dignity of marriage between a man and a woman. We will not give in to the West, just because it has money with which it can put pressure on us,"  said Archbishop Ignatius Kaigama of Jos.
Text: Giuseppe Nardi
image: Tempi
Trans: Tancred vekron99@hotmail.com
Link to Katholisches...
AMGD
Posted by Tancred at 4:59 AM 12 comments:

The Holy Family -- The Model For Every Family

After violent attacks against Christians in Nigeria and the Philippines the Pope called for peace and forgiveness.

Rome [kath.net/as]  This year the Feast of the Holy Family fell on the first Sunday after Christmas on today's feast of St. Stephen.  In his address before the traditional prayer of the Angelus, Pope Benedict expressed the unity of the Holy Family, which must be a model for every family.

After the Angelus the Pope discussed the episodes of violence which occured in the Phillipines and in Nigeria against Christians,  which in the Philippines claimed 32and in Nigeria a dozen lives.  Benedict XVI renewed an urgent call for peace and reconciliation and explained his sorrow for the victims of this "absurd act of violence".

"I renew again my outcry to leave the way of hate, for peaceful solutions for these conflicts, and to create security and peace for these dear people," said Benedict XVI.  "On this day, when we celebrate the feast of the Holy Family, who survived the dramatic experience of beimg pursued by Herod's murderous anger into Egypt, remind us also of everyone and especially families who are forced to leave their homes because of war.  To flee violence and intolerance.  I invite you, therefore, to join me in prayer, to ask the Lord that He could touch the hearts of men and instill hope, reconciliation and peace.

On the feast of the Holy Family the Pope asks the faithful, to consider this "Ikon", in which the small Jesus in the midst of affection and concern of His parents.  Every child has something of this mystery within.   People don't only experience the procreation of children solely as a pure act of reproduction.  They "take its richness for real and understand that every person, who comes into the world, comes as a sign for the prominence of the creator and the Father in Heaven."  For this reason it is important that every child that comes into the world should be received in to the warmth of a family.

Extraordinary luxuries are not important, said Benedict XVI rather just the love of the father and the mother.   This gives the child security and places him in their care, to discover the reason for life.

The Holy Father greeted the pilgrims from Germany with the following words:

A Christmas Greeting for the pilgrims and visitors in the German language.   Today we celebrate the Feast of the Holy Family.  The word of God has become man and has grown in a family, which had protected him from the storms of the time.  Jesus Christ also blessed our families and left the gift of his divine love shining in them.  For you and your loves I wish you a Grace filled Christmas time.