Don Nicola Bux on Amoris Laetitia: "The Eucharist is Not a Sacrament for the Sinner"

"The Eucharist is not a sacrament for the sinner but the sacrament of reconciled sinners. Just as it is the source and principle of mercy. I hope I have been clear!

Nicola Bux, August 13, 2016 at a youth meeting in Schio. The theologian spoke on the theme "The sacraments are not a joke." The Eucharist is not a sacrament for the divorced and remarried, but for reconciled sinners. The liturgist Nicola Bux is one of the most reputable practitioners of the liturgical science and is one of the leading supporters of Benedict XVI's intended liturgical renewal. He is a lecturer at the Theological Faculty of Puglia and the local Institute of Religious Sciences, consultor of the Congregation for Doctrine of the Faith and the Congregation for the Causes of Saints  and spiritual assistant of the St. Josef Brotherhood of Bari. Under Pope Benedict XVI. he was also a consultant of the Office for the Liturgical Celebrations of the Pope .
Image: Santa Maria dell'elemosina (Screenshot)
Trans: Tancred vekron99@hotmail.com
Link to Katholisches...
AMDG
Posted by Tancred at 4:53 PM 12 comments:

Vanishing Faith in the Eucharist is Reason for Priest Shortage

(Vienna) Bishop Klaus Küng of St. Pölten in Lower Austria has indentified that the decline of faith is the reason for the lack of priestly vocations. The bishop described the dwindling "faith in the Eucharist, that Jesus Christ himself is present, that the sacrifice he has taken on the cross is made ​​present," as the reason for the shortage of priests, which is a "'great tribulation" for  the Church.  Bishop Küng said last Wednesday before the Thomas Academy at the Philosophical-Theological College St. Pölten.  There are "astonished eyes" in the church "when we call priests from Poland, India and Africa to us." Often celibacy is responsible for the increasing shortage of priests, but the real reason was the "disappearance of faith," said Bishop Küng. It should also be less the Church, which - as often claimed - a "unintelligible language", but rather the "life of the people, consumer behavior and bustle" that they "hard receptive to the message of Christ" do.
Throughout history, the Church has often resembled a "wild garden". But it has ever been "newly planted and watered" again and again. So in spite of everything today, said the Bishop. "seeds" would germinate and bear fruit and that applies to every believer as well as  family, community and church.  God counted on  a "sower" to ensure "that we lend him voice, hands and heart and through our personal testimony to multiply the faith," said Klaus Küng, who has led, since 2004, the Diocese of St. Pölten. Previously, he was the  bishop of Feldkirch (Vorarlberg) for 15 years.   Küng who belongs to Opus Dei is going to finish his 75th year this coming September 17.  It is believed that Pope Francis is going to emeritus him in the fall.

Eucharist is the "Beating Heart" of the Church

As a consultant   the nun, Sister Maria Lisa Haim, also spoke on the Holy Eucharist as the "vital principle" and "beating heart" of the Church. The entire daily life of the Church would be strengthened and invigorated by it, such as preaching and diaconal life. The Second Vatican Council  Eucharist, therefore,  described the Eucharist as "the source and summit of the Christian life."  The  decree "Lumen Gentium", since it is the sacrament that love, "which comes from God and Jesus bids  his disciples do as he has" says Sr. Haim., who herself belongs to the  pontifically recognized Community, Pro Deo et Fratribus - Family of Mary,  while she is also a graduate of the Philosophical-Theological College St. Pölten. Her community  which belongs to the priestly community Work of Jesus the High Priest (OJSS) has taken over the former Servite House of Gratzen (Nove Hrady) and looks after the nearby pilgrimage site of Maria Brünnl (Dobra Voda) in the former German-South Bohemia (Sudetenland) near the border to Austria.

As part of the Thomas Academy  two theses of the graduates from  the  Philosophical-Theological College  were also presented about the right to life. Julia Blaimschein spoke on "The moral Status of Human Embryos."  She showed five arguments, the "good reasons" there are to protect the human embryo after conception.
Eva Doppelbauer, former spokeswoman for Gloria.tv, spoke about "Euthanasia as a Conspiracy Against Life". The speaker warned of the "case of pity" and pointed out that  a slow but steady shifting of arguments and steps will lead towards the legalization of euthanasia.
Text: Giuseppe Nardi
image: Philosophical-Theological College of St. Pölten (Screenshots)
Trans: Tancred vekron99@hotmail.com
Link to Katholisches....
AMDG
Posted by Tancred at 7:27 PM 19 comments: 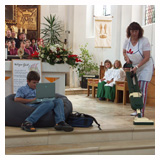 From the German District Page of the SSPX...
Posted by Tancred at 12:55 AM 1 comment: