Edit: The previous pastor died as sordidly as he lived, a friend of Cardinal Bernardin, he was an avid supporter of the evils of sodomy. Meanwhile, +++Cupich has marshaled his evil forces and thrown Father abruptly from his rectory. There have been numerous death threats and vandalism from the NOH8 crowd. This is an exact duplicate of the treatment meted out to the late Bishop Rogelio Liveres.

Has anyone read the story of Lot?

And you’d think that this priest had burned an icon or desecrated the Sacrament.

[Mahound’s Paradise] Just hours ago, new Chicago Auxiliary Bishop Mark Bartosic arrived unannounced at Resurrection Parish on Chicago's Northwest side and told Pastor Paul Kalchik that he had just minutes to get his belongings together and vacate the premises or the police would be called to arrest him for trespassing.

Fr. Kalchik was about to perform a wedding.

Soon after, Fr. Kalchik left for an undisclosed location, accompanied by his brother who had been visiting the parish. 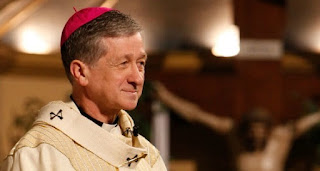 Edit: this was posted before the USCCB results that ++Cupic tried to spin.

(Washington) The episcopate of the USA is rumored to be against Pope Francis. The latest evidence of this is a warning from Pope-confidant Bishop Cupich, Archbishop of Chicago and designated Cardinal, that the elections on the presidency of the bishops' conference are "no referendum on the pope". It was a warning that was not entirely in vain.

Cupich was designated by Pope Franziskus as a left-wing successor to Cardinal Francis George, Archbishop of Chicago, one of the most important bishops' seats in the world. The appointment was understood by the other bishops as a definitive hint. Further appointments followed. Observers see in this the Pope's intention to renovate the "conservative" bishops' conference.
In the 1970s it was still different in the USA. Leading bishops were in a progressive hand. It took 25 years to implement a change of direction. John Paul II was more hesitant in bishops' appointments in the US, while Benedict XVI. with Cardinal Burke was more determined. Pope Francis knows fewer considerations, which is why his transformation, should he consistently push it forward, has to take place over a much shorter period.
At first he drove Cupich like a nail into the  Bishops' flesh. When the other bishops did not send the new Archbishop of Chicago as a representative to the family synod to Rome, Pope Francis himself personally appointed him. Next Saturday, he created him as a cardinal. Another stage of weight shifting.

Cupich becomes Cardinal, Chaput does not

The cardinal -in-spe has been thanked for his loyalty.  Cupich defended the controversial post-synodal document Amoris laetitia  and has been rewarded by Francis with the dignity of Cardinal. He wanted what the pope wanted, said Cupich. Since the pope still does not say what he wants, Cupich's statement shows that he has access to information which is denied to the public.


In contrast, Archbishop Charles Chaput of Philadelphia, whose guidelines issued for his archdiocese that despite Amoris laetitia, reaffirms the Church's teaching marriage and morality, has been passed over again by Francis at the Cardinal appointments, although Philadelphia is one of the Archdiocese traditionally associated with the cardinalatial dignity.
Archbishop Cupich has now given an understanding of what Pope Francis apparently thinks and expects. He criticized his confreres among the bishops  and told them and the public why they were opposing Francis: "because they do not understand what it means to be bishop of the Catholic Church."
These words are part of an interview Cupich gave the US Jesuit magazine America. The occasion was the Autumn Assembly of the Bishops' Conference, which began yesterday in Baltimore.
The main point of the interview was the presidential election in the US and the situation in the American Episcopate (USCCB). As for the election of Donald Trump as the 45th President of the USA, Cupich emphasizes "the deep divisions" in American society.

Election of a new President and his Deputy

On the situation in the Episcopal Conference, he said that the election of the President was not a "referendum on the pope".  Cupich urged his confreres to "support the successor of Peter."
At the Autumn Assembly, the bishops elect the successor to Archbishop Joseph Edward Kurtz of Louisville as President of the Episcopal Conference and his deputy. One term only lasts three years in the USA. Re-election is not intended. It is customary for the deputy to become the new president.


This office was held Cardinal Daniel DiNardo, the Archbishop of Galveston-Houston, during the term of office 2013-2016. In November 2013, the "Conservative" DiNardo won 62 percent against the "Conservative" Chaput of Philadelphia, who received 38 percent of the votes. As early as the summer of 2013, Chaput had already expressed the opinion that Church-minded Catholics have "difficulties" in understanding Pope Francis.
Ten candidates are running for the office of the president. Cardinal DiNardo is considered a favorite. [He won] He was one of the thirteen cardinals, who in October 2015, at the beginning of the Second Episcopal Synod, complained about the Synod Rules of Procedure in a letter to Pope Francis, and criticized the impression of the "prefabricated results".
Archbishop Chaput was also a candidate. The nine non-electors will automatically be considered applicants for the Deputy Office. After the vote setback a year ago over the synodals, Archbishop Cupich prefers not to be counted again. It was eagerly awaited whether Chaput would be elected deputy president this time, presumably to be president in 2019.

There were "some bishops," who are very "regrettable," says Cupich, "who oppose the pope" or "work against him." He is supposed to be the chief. The bishop's office can only be exercised with the collegiality. He explained that Archbishop Chaput was not a suitable (vice) president of the bishops' conference.
Instead, he looked towards the south-west, without naming a name, but on the other hand, a theme of central importance to Pope Francis. Cupich expressed the hope that all the bishops of the United States would work for "illegal immigrants and their families" to "defend and voice them". [+Gomez]


Donald Trump had announced the expulsion of 2.5 million illegal immigrants. According to official estimates, at least eleven million illegal immigrants remain in the US. President Obama has also deported millions of illegals. Since Obama is of the political left, this point has not been addressed by the left-wing media. Under a President Trump, this is likely the change abruptly, as the Jesuit magazine America well suggests.
What Cupich did not say so clearly, the magazine sought to explain. They recommended the Archbishop of Los Angeles, Jose Horacio Gomez, as a suitable candidate. Gomez belongs to Opus Dei, and the group of "conservative" bishops. Within the framework of the given majority relations, Cupich was looking for the candidate, who could be interpreted most closely in the sense of Pope Francis.  Above all, it was to prevent Chaput.
Gomez is a native Mexican who came to the USA due to his pastoral activity and was granted nationality in 1995. Latin Americans represent 40 percent of Catholics in the United States. His election  America let to be understood, would be a signal of an anti-immigration policy.
Archbishop Cupich also mentions "violence, violation of human rights, environmental degradation, poverty, arms trafficking and corruption."
The elections that took place today brought a compromise with which both sides can live. The open confrontation was avoided. The new president was, as expected, Cardinal DiNardo. The new deputy, and most likely, the next president in 2019,  will be [is] Archbishop Gomez of Los Angeles. Both are decisive defenders of the right to life and the family.
The intricacies of why he prefers Archbishop of Chicago Gomez to Chaput are to be sought in the inner church parties. They have much to do with Pope Francis and his political course, which he would like to inject in the world church. Neither Gomez nor Chaput are representative of this course. In contrast to Gomez, Chaput has already indirectly challenged the Pope. Moreover, because of his Mexican origins, Gomez is simply easier to "integrate" into the course desired by the Pope.
Text: Giuseppe Nardi
Image: Infovaticana / Wikicommons
Trans: Tancred vekron99@hotmail.com
Link to Katholisches...
AMDG
Posted by Tancred at 3:07 AM 4 comments: 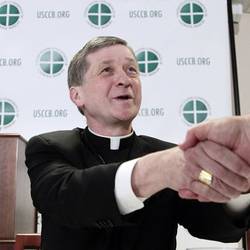