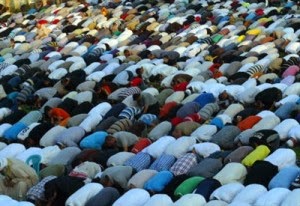 (Oslo) A video showing the largest  Islamic Assembly took place in Norway, which the Muslims are aiming for their own representation in Parliament. The Assembly voted unanimously for the stoning of women accused of adultery, and for the stoning of homosexuals.
The incident dates back to last March, but  is becoming known just now. The video does not show any underground Muslims in a hidden basement, beyond the state's authority. Quite the contrary. The video shows the assembly of an official Islamic center in the Norwegian capital Oslo. This is not  a banned Islamist group meeting secretly. The film images show a regular meeting of ordinary Muslims  living in Norway, many of whom already have Norwegian citizenship. The three-day meeting, entitled Peace Conference Scandinavia 2013 by Net Islam took place from  23-25th March in which about 4000 Muslims took part. Islam Net , of course, according to website islamnet.no is an umbrella organization of Norwegian Muslims.

"Are you Satisfied with the Stoning of Adulterers and Homosexuals?"

In part of the session focused on issues such as separation of men and women, stoning of women and homosexuals. The organizer of the meeting, Fahad Ullah Qureshi of Islam Net, asked the audience whether they favor or oppose it.
One question is: "How many of you are happy with any written in the Koran and the Sunna penalties, be it  killing, whether stoning for adultery, or what ever, that they come directly from Allah and his Prophet, that it happens to be the best punishment for people and that it is applicable in this world? Who agrees? "The majority of Muslims present advocated it. As the pictures show, the result is even unanimous.

"Are you Radical Muslims?"

Another question is: "Are you radical Muslims?". No one perceives himself as such and says, yes. The question of whether homosexuals are to be stoned, is receives a popular plebiscite. Again, the moderator asks, "And now, what will they say of us, that we are extremists?" The Assembly provides evidence that positions that are rejected as extremist in the West and also by Christianity, are not extremist in Islam, but an expression of true Islam.
The death penalty is in many Islamic states, cite the Koran in force. You will be arrested  for apostasy, but can also be imposed for adultery, homosexuality, bestiality, betrayal and other occasions.

"Islam is the Truth" - Calls for Muslim Representation in Parliament

A young Muslim asks why in Islam men and women must be separated from each other, while this is not the case with the Christians or Jews. The moderator replied: "The answer is simple: Islam is the truth that Christianity and Judaism are not the truth."
The video was posted by organizer Islam Net Posted, itself. The organization was officially brought together  to  demand a separate representation in the Norwegian Parliament.  The event organized by Islam Net  was the largest Islamic gathering in Norway.
Text: Giuseppe Nardi
Photo: AsiaNews
Trans: Tancred vekron99@hotmail.com
Link to Katholisches....
AMGD 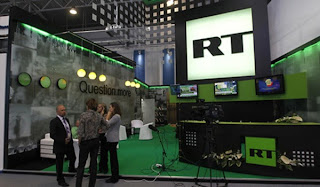 The U.S. has interrupted the transmission of the television station "Russia Today", reports the editor in chief Margarita Simonyan at the transmitter Twitter. "I always expected that you would begin to block our stations in the U.S.. Now it has happened. Long live the freedom of speech," she wrote.

RT, formerly Russia Today, is geared to international audiences, a publicly funded television station based in Moscow. It is broadcast in English, Arabic, Spanish and Russian. The stated goals of the transmitter are to present Russian perspectives on international affairs to the public and reduce old prejudices and stereotypes about Russia.

The Dregs Swim to the Top

Regarding the Ascent of the Green Party

The parties are part of democracy, because they allow people without ability and character to excel.

(kreuz.net)  Democracy is a form of mass social existence in which the lower classes make a tin god of themselves.

With the erecting of a temple of self-divinization -- the propylaea -- the Democracy takes its beginning.

He is positions himself for deification.

In these days such temples aren't called propylaea, but parliaments.

The political parties are  the components  of Democracies, because they offer possibilities for advancement, which reach disproportionate social heights, without being accompanied by corresponding accomplishments or necessary qualities of character.

The conquest of the central political positions of power is the successful completion of the stage of Mass Revolution.

This has penetrated in all areas of social life, decomposing them democratically.

The aim of democracy consists in undermining the established competition.

In its place a cornucopia of opportunities is made, which gives the masses "equal chances",  to position themselves as members of parliament or higher in order to secure for themselves the best possible positions.

The universities, television studios, the courts, the administrative apparatus and the executive can not long withstand the power of the democratic masses.

They will by and by be overwhelmed by the democratic mob.

Need brings creativity and urges the teaming mob to pull all registers.

Through this all science will be falsified, as well as pseudo-sciences will be founded.

New titles will be introduced for common dignitaries.

One can scratch some money together in order to appear prosperous and extravagant .

Jobs and positions will be discovered which no one needs.

At the end of democratization comes social collapse.

The democratic monster beheads society, in which all of those who are well-informed are pushed aside and the know-it-all is put in his place.

This is from the blog  Dr. Andrej Poleev...

Email ThisBlogThis!Share to TwitterShare to FacebookShare to Pinterest
Labels: Democracy, The God that Failed

Editor: If you read between the lines, you can see that he thinks the USA has too much Democracy and needs more Socialism.

Saratov, May 11, Interfax - Head of Patriarchal Dioceses in the USA Archbishop Justinian of Narofominsk believes the USA still has to work hard on its democracy.

"Economic living standards in the US are much higher than those in Russia. Our situation is aggravated by poverty and sometimes unbearable living conditions in the country's regions. At the same time, I wouldn't regard the situation in the United States as ideal," Archbishop Justinian said in an interview published by the Pravoslaviye i Sovremennost (Orthodoxy and Modern Times) magazine of the Saratov Diocese.

According to him, several thousand strong demonstrations may be held in America where people freely express their opinions and protests but "they often receive no response from the Government: "Do you want to speak out? You are welcome, this is America, and we have democracy. But the authorities will continue to pursue their own government policy."

"It is only evident. There are problems here just as in any other state, including problems with relations of nationalities," Archbishop Justinian said.

However, he believes that a true democracy or "to put it better, a true freedom of which we sometimes dream is unfeasible on Earth," as "a true freedom may be only in Christ."

Editor: Feh, Democracy. Your position as a Prince of the Church makes your sanguinity about it ring somewhat hollow. Irony here that so many on the left actually despise democracy when it goes against their pet projects: desegregation, gay marriage, woman's rights...etc...

This is the new neo-Conservative Bishop of Oakland. An improvement upon his predecessor.

It is a curious irony that in this moment of history, when people in a number of countries in the Middle East are agitating for change from dictatorship to democracy, here in our own country, the oldest democracy with a written constitution in the world, there is a movement of the ruling class toward taking more and more power into its own hands. The flashpoint for this movement? The hot-button issue of our day: marriage.

The comparison of the Middle East and the United States, though, is just irony No. 1 among many others in the ongoing saga of the inter-relation between the marriage issue and democracy. The examples are legion, and it would not be possible to list all of them here. I will, though, mention some of the more salient ones.

Read further at The Catholic Voice...
Posted by Tancred at 10:39 AM No comments:

Does Keith Ellison benefit from voter fraud? The Pro-Abort, Islamist politician is afraid of his constituency being too afraid to vote, and even felt the need to doctor up one of the Tea Party's posters to make his point.

Voter Fraud is a felony and there is also a $500 reward. What is this rabid socialist afraid of?

And also, for those of you who are interested, Keith is a graduate of University of Detroit Jesuit High School and Academy, another great statesman brought to you courtesy of the Jesuits.

Posted by Tancred at 3:05 PM No comments: