Auxiliary Bishop Dick: "The Aversion to the Old Rite is so Strong That it Can Not be Celebrated at All" 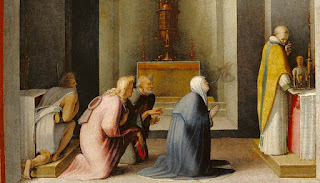 "Communion of Saint Catherine of Sienna" by Domenico Beccafumi (1520)


"In practice, however, the aversion to the form of the old rite is so strong that it can not be celebrated at all. Here the Pope's intention was not taken up."

Msgr. Klaus Dick, auxiliary bishop of Cologne, in an interview of the Tagespost for the 10th anniversary of the Motu proprio Summorum Pontificum and its implementation in the Federal Republic of Germany.
Image: Wikicommons
Trans: Tancred vekron99@hotmail.com
AMDG
Posted by Tancred at 3:28 AM 10 comments:

1:10 A.M. — Worshippers packed the chapel of their new church Saturday at Jesus Obrero Catholic Mission, eager for their first Mass in the building.

Bishop Frank Dewane of the Diocese of Venice made his way to the altar through a sea of believers, where he presided over the night’s service.

The 16,000-square-foot building on Nuna Avenue in east Fort Myers replaced the 25-year-old, worn-out chapel that sits next door. The new building seats about 1,300, although many had to stand for the Mass,

Posted by Jordan at 5:26 AM No comments:

The new generation of priests and young Catholics become independent of the decaying Old Liberal ideology.


[kreuz.net, Herzogenrath] Beginning this December in the City of Herzogenrath -- by Aachen in west Germany -- a Conference on the Liturgy will take place. This has been organized by the website Liturgische-Tagung.de. They give detailed information about the program and the background of the Conference.

The Congress will be carried by several Traditional Societies.

Among them are the 'Initiativekreise' of Cologne and Hamburg as well as the Lay Society, 'Una Voce'.

Other attendees are the 'Netzwerk katholiscer Priestr' [Network of Catholic Priests] and the youth movement 'Generation Benedikt'.

A highpoint of the Conference is a Pontifical Mass in the Old Rite with [newly appointed and beleaguered] Bishop Vitus Huonder of Chur in Switzerland. It will take place on December 2nd at four o'clock.

The lecturers in appearance are all highly esteemed professors.

Subregent Tomas Stübinger von Eichstätt will speak about the duties and responsibilities of the pastor in the clerical profession.

The Freiburg Liturgist, Deacon Helmut Hoping, will lecture about "the restoration of the understanding of the Eucharistic Celebration as Sacrifice of the Mass."

A special guest will be the famous Norwegian convert Erik Mørstad.

He will have an essay on the them of "High priest Melchizedech and the High Priest Jesus Christ -- the Mystery of the Victim in the common writings of the Old and New Testaments."

The Conservative Anglican Bishop of Fulham in Great Britain, John C. Broadhurst, speaks about the Apostolic Constitution 'Anglicanorum Coetibus' as "Way to Rome".

Also there will be a discussion round table with the Bishops of various Christian Confessions.

Link to original...
Posted by Tancred at 1:03 PM No comments:

When One Sees How the Holy Father Celebrates Mass Today, One can Barely Notice Any Difference Between That and His Ordination Mass

A German Bishop has sharply criticized the post-conciliar liturgical reform. One wanted to tear out the altar --- and horribly degraded it.


[kreuz.net] The Liturgy must be recovered as the "holy life's blood" of the Church.

Bishop Emeritus Klaus Dick (82) of Cologne explained most recently in a lecture in Cologne. On Friday the Cologne 'Domradio' (Cathedral Radio) recording of the presentation. It consists most substantially from citations -- predominantly from Pope Benedict XVI.


A Break with Tradition

The effect of the post-conciliar Liturgical reform called for-- said Msgr Dick -- "the virtual self-destruction of the Liturgy".

More precisely he criticized so-called "creativity" in the Ligurgy.

He warned about that attitude, "that even the new form of the Liturgy is an obligation".

In the post-conciliar period Msgr Dick perceived with a citation from Cardinal Joseph Höffner (+1987) of Cologne that there was a cataclysmic "break with Tradition".


Porous Texts with an arbitrary Interpretation

After the pastoral council it was known, that the Latin was suppressed (disestablished). The prelate corrected this, "The opposite is the case."

More accurately the Council deleted the value of the altar.

Indeed after that the Altar "had been so horribly degraded as never before."

In many churches there is placed before a high altar a "post-conciliar thing" -- lamented the Auxiliary Bishop the Furniture Industry.

In the concept "People's Altar" the Auxiliary Bishop said, that every altar must serve as a celebration with the people.

Even the term "celebrations-altar" Msgr Dick indicated was false: "Are there any altars where we don't celebrate?"

Already in these examples Msgr Dick sees, that the Liturgical Reform "is crooked".


Considerable Shortcomings only in the New Mass

In his lecture the Auxiliary Bishop tore the cheap polemics against the Mass of All Ages to pieces: "The Old Liturgy had considerable shortcomings."

He could not find any evidence of these.

In the entire lecture he mentioned only -- at another point --. that in the Old Mass on Sunday that [only] the preface of the Trinity was used.

Against that he found the New Missal used numerous prefaces for Sunday.

The Auxiliary Bishop found these to be "a great honor" for the Old Mass.

He desires practical changes in the Old Mass. So that the Rite would be, which is directed by Peter, supposedly "improved".

For that, he argued for the Pope's wish, that both Masses should enrich one another side by side.

Bishop Dick submits, that in the New Eucharistic Celebration it loses sacrality.

Indeed this is a natural part of that Liturgy.

One gets the false intonation of the character of a meal applied to the liturgy: "It must be a successful meal."

Finally, Msgr Dick indirectly points out, that he doesn't understand the difference between the Old and the New Mass:

"When one sees how the Holy Father celebrates, one can barely notice any difference between that and his ordination Mass."

Link to original..
Posted by Tancred at 11:03 PM No comments: