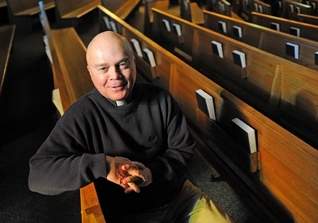 The head rots from the fish down and bad appointments of Bishops yield bad results and this former Seminary rector is now in charge of a parish.  He was appointed by Archbishop Weakland..  Archbishop Weakland himself was a favorite of Paul VI.   Not only does the Seminary rector, Father Victor Capriolo suffer from deficiencies in theology, but he suffers from deficiencies in his knowledge of human nature as well:

I am aware also that Saint Paul says the various distinctions we use to categorize and divide one another are not appropriate for the Church. “There does not exist among you Jew or Greek, slave or free, male or female.” (Galatians 3:28).

Link .fdlreporter.com to article, here
Posted by Tancred at 8:58 AM 2 comments:

Jeff Anderson keeps pushing this case, which he released initially in the New York Times. In the course of promoting his interests, and those of the people behind him at the ACLU, he is attempting to summon Pope Benedict to the stand where he wants to "cross examine" the Pontiff. Jeff Anderson isn't interested in the welfare of the victims, he's interested in the same agenda that two Belgian Bishops, a Viennese Cardinal, a smutty Romance Novelist are. However, a similar case in Kentucky, naming the Pope has recently been dropped. Actually, in fairness to Father Greeley, the author of pornographic novels he is, he says celibacy isn't the cause of the problem, only the "clerical secrecy" and so forth, as he parrots the same line used by Jeff Anderson and his professional help, Richard Sipe, who's spent years investigating the problem, but is driven by the same agenda that motivates Jeff Anderson, an ACLU lackey.

We've said it so many times, he's not so much interested in the welfare of his victims, as the Communists alleged to be concerned about the Scottsboro Boys, whom they used to create an emotional outpouring and then discarded after their political goals were met. This is one part of a continuous attack to destroy the credibility of Religion in general, and Catholicism in particular. What's even more interesting is that, based on the various statements from others within the Church, he has help. Liberal prelates and priests provide him and his masters with the fodder to litigate, and you have another emotional outpouring and an outcry for justice. This was done before in Nazi Germany when Germany's propaganda minister launched a campaign against the Catholic Church in the early 30s using precisely the same techniques being used by Jeff Anderson and his masters.

It's not a stretch to say it can't happen here. There are people who have an interest in undermining America's very foundations, its laws, its infrastructure, education system and culture. We're living in the days of tremendous debasement when an irreligious ex-Lutheran can do the bidding of irreligious Pinch Sulzberger at the New York Times to promote slanderous stories bent on destroying part of the fabric of American Society.

Just remember, Jeff Anderson has many friends within the Church, like him and him who aid his attempt to promote discredit and change the Catholic Church.

Standing beside a portrait of Martin Luther King Jr., the increasingly vocal antagonist of the Catholic Church has shown himself to have a reach extending beyond the street and quiet graceful neighborhoods of St. Paul, Minnesota.

Archbishop Listeki Would Rather Accentuate the Postitive

A public hearing on legislation that would eliminate the statute of limitations on civil actions against child sexual abusers turned into something more Tuesday at the Capitol. Milwaukee’s new Archbishop, Jerome Listecki, found himself on the hot seat, regarding one of his predecessors.

State Senator Glenn Grothman referred to former Archbishop Rembert Weakland as “a piece of work,” and pressed Listecki about why Weakland was allowed to attend Listecki’s recent installation Mass. “Isn’t it really a poke in the eye to all these people who’ve suffered so horribly, to continue, after the actions of this man, to give him a place of honor in ceremonies?” Grothman referred to church officials who allowed Weakland to attend the installation as “screwballs.”

Listecki admitted that Weakland is “a lightning rod” within the Archdiocese. “Having said that, you know you do talk to some people who talk about some of the good things that he has done. Now, certainly, those good things, a pall is cast upon them because of the direction and leadership he’s given in this area.”
Weakland served as Milwaukee Archbishop for twenty-five years and has been accused of returning priests accused of sexually abusing children to active duty. Grothman asked Listcki about Wealand’s current status. “Does he have any position of honor still in the church? Is he still over anybody or have any authority at all?” Listecki said no, that Weakland is “totally retired.”

Retired, but not without honor, according to Peter Isely, Midwest Director of the Survivors Network of Those Abused by Priests. “He’s the emeritus Archbishop of Milwaukee, that is an honorary title. That title can be taken from him,” said Isely. “He can be removed from the board of the Catholic Conference. The pastoral center at the Cathedral is called the Weakland Center. Change the name.”

The Mighty Weakland Comes to Bat...
Posted by Tancred at 12:14 PM No comments:

If Flannery O'Connor or Evelyn Waugh had been as hostile to the Catholic Church as they were to the world around it, they would have written a story like that of Archbishop Weakland. The Irony of him speaking at the unveiling of his own bronze image in a cathedral he virtually destroyed might give some hope to many of you who are morally attuned enough to realize the insanity of the situation. Enjoy the irony we say for God's vengeance can't be far behind in this story.

Link to story, and photos showing the artwork commissioned by Blessed Rembert who is depicted giving shelter to innocent children. It nearly rivals Ferdinand Marcos' own memorial which features Mozart's Requiem being played day and night for eternity.

We suspect that these are the signs of the depravity accompanying the death of Faith in the West when men no longer fear God and worship false idols.
Posted by Tancred at 8:09 PM No comments:

Milwaukee Sex Abuse Archbishop Has Center Named after Him

Sex Abuse Archbishop is retired but his legacy lives on in Milwaukee as professional Victims Make Demands of new Archbishop..

The "Survivors Network of Those Abused by Priests," or SNAP, said they want Bishop Jerome Listecki to chart a new course in the diocese.

The group is calling for the resignation or firing of auxiliary bishop Richard Sklba.

Snap said Sklba was instrumental in covering up several sex abuse cases in the Milwaukee diocese.

They also want bishop Listecki to rename the Weakland Center at the cathedral.

The building is named after former archbishop Rembert Weakland, who admitted to a homosexual affair several years ago.

"We're here today to say to Archbishop Listecki, 'take your first 100 days and do a couple things to get this Weakland-Sklba era behind us,'" said SNAP's Peter Isley.

His proclivities are not only connected with sexual abuse, but with vandalism as this Seattle Catholic report from several years ago indicates....
Posted by Tancred at 9:06 PM No comments:

Newly released depositions reveal that Nantucket's naughtiest nightowl, when he was an eminent pastor of souls, had an effective method for dealing with embarrassing documentation. He shredded it.

In the deposition, Weakland explains that he got copies of the weekly logs made by vicars in the archdiocese about ongoing problem priests. He said he would read them, then shred them because he didn't want to keep them in his office. He would "try to remember anything that is quite serious and important," and later discuss the matters with the vicar.

Didn't want inadvertently to disedify the cleaning lady, I suppose.

Everyone has his favorite Rembert Weakland story. Many lovingly recall his remark that pro-life Catholics "need a hug and a laxative." My own heart is particularly warmed by the priestly solicitude he displayed in August of 1984. In July of that year, three lay teachers at an archdiocesan school wrote the archbishop that Salvatorian Fr. Dennis Pecore was inviting boys to his bedroom for purposes of sexual mischief. Weakland turned the tables on the informants and sternly wrote back: "any libelous material found in your letter will be carefully scrutinized by our lawyers." The teachers took the point, but they ignored the threat and continued to plead for an intervention. For their pains, all three were fired. In January 1987 Pecore was convicted of sexual assault on a juvenile (and later sentenced to 12 years in prison for another sex offense). After paying out $600,000 to Pecore's victims, Weakland wrote in his May 26, 1988 Herald of Hope column: "Sometimes not all adolescents are so 'innocent,' some can be sexually very active and often quite street wise." The pastoral touch.

When the sexual abuse crisis exploded in early 2002, Weakland was still riding high, congratulating himself on his accomplishments as a "maverick" archbishop. In early March he wrote his priests: "I would suggest that we all relax a bit on our Lenten resolutions. The bombardment in the public forum about pedophilia in the Church has provided enough penance for everyone this year." Shortly thereafter Weakland's world exploded as former catamite Paul Marcoux made public love-letters from the archbishop, as well as a settlement by which $450,000 of Archdiocesan funds were paid him as hush-money.

Post-resignation Weakland seemed only dimly aware of his disgrace and continued to write petulant (if muted) criticisms of Pope John Paul II and other orthodox Catholics. More recently, in his autobiography, Weakland admitted to several homosexual liaisons in his career as priest and bishop. As is perfectly in character, the conclusion Weakland drew from his infidelities is that it's the Church that needs to rethink her teaching on sexuality and the priesthood. The image of Weakland shredding evidence of abuse with one hand while, with the other, throwing brush-back pitches at concerned layfolk provides a wonderfully rounded portrait of this most progressive of progressivist bishops.

Which brings me to my point: Uncle Di's Christmas Gift Suggestion for 2009. For that irony-impervious prelate on your holiday list, I highly recommend Unfailing Patience and Sound Teaching: Reflections on Episcopal Ministry in Honor of Rembert G. Weakland, O.S.B. -- a bargain at only $49.27! Think of it as a down-payment on Paul Marcoux's trousseau.

P.S. I expect it'll be a surprise best-seller in Ireland this season.