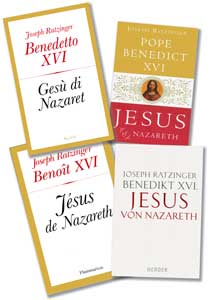 I do not think it wise to read anything written by this pope or his predecessor, translation errors or not. And that is not an unkind comment. I am merely saying that when someone has already so often spoken scandalously why oh why would one then read their works and possibly embed even more error further into their brain? Not I. Even one erroneous opinion not previously by The Church can and will lead a soul astray. I have witnessed it often and been a victim of this myself.

I wish this Pope would stop writing his strange, esoteric books which aren't exactly edifying. Better that we should read better minds like Marmion, Archbishop Goodier and/or Geuranger if we want solid teachings on the life of Our Lord.