This Alone Could have Cost the Munich Bishop the Cardinal's Hat 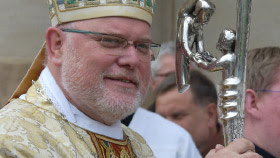 Editor: He was supposed to have gotten his hat, according to Vaticanist Paolo Rodari, but this story, persecuting Bishop Mixa and attacking the Prior and Abbot of Ettal (who were later exoherated) for alleged child abuse, probably explain why. Here's why he probably didn't, and might not get, the Cardinal's hat.

Church enemies organizsed in the name of the Archdiocese of Munich-Freising, for the promotion of more AIDS, more Mortal Sin, more Divorce and more Child abuse.

[kreuz.net, Mühldorf] In the coming Saturday, the alleged 'Catholic Jouth Center Mühldorf" have organized a workshop against the Sixth Commandment.

The horrible occasion was held under the title "For me or for you? Themes between Bed and Confessional".

Mühldorf am Inn is around 80km to the northeast of Munich.

The Catholic Youth Center in rural Mühldorf is an outpost of the 'Archdiocesan Youth Office of Munich and Freising'.

The promotional day with conference portrayed itself -- says the advertisement -- "in the background of life realities of the youth and Catholic sexual morality".

A particular focus of the promotional day was the theme sodomy, child sexual abuse and extra-marital sexual activity.

The participants in the discussion event in the afternoon, presented their position on the website of the 'Youth Center Mühldorf".

Much Sex, Little Love, No Marriage

One of the is Christian Agi (24). He is the President of the Diocesan Committee in the 'Organization of German Catholic Youth':

"Sex as the composed decision and interaction of two mature people can never injure human worth" -- he preached on a Jungle Moral learned in 'Bravo'.[1]

Agi speaks about an Ape Congress: "Sex is as natural as breathing or eating, nnd there is no difference between sex either before or after marriage."

The only thing immoral is only morality: "Sex is sex -- and the prohibition against pre-marital sex is much more a "heavy infringement against the worth of the person".

Julia Dotzauer (20) is a youth delegate of the 'Organization of German Catholic Youth' in the Archdiocese of Munich.

For her, "homosexuality is neither sinful nor a sickness!".

Then the impure girl became the schoolmarm and said: "Even the Catholic Church will see that gradually."

The secular priest Fr. Martin Garmaier of Waldkraiburg stepped in for the non-pruductive marriage act:

"With their one sided statement of a general prohibition of artificial birth control makes the Catholic Church increasingly unbelievable, which incapacitates the associated responsibility of the parents." -- he stuttered.

Next to other functions of the decadent old Liberal establishment the occasion will permit members of the homosexual organization 'Lesbians and Gays in the SPD' slavering against the truth of Catholic teaching.

[1] Bravo is a German Teen Magazine which features nude photos of adolescents.

And, sadly, this is the roaring fire upon which John Paul's misguided "Theology of the Body" is thrown.

For those who seem to think that the late Pope's "theology" is the antidote to the shenanigans going on in Munich, think again. It is more like gasoline thrown on that roaring fire.