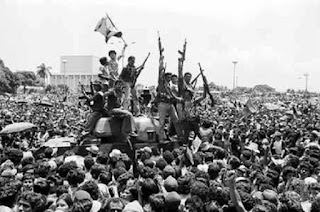 [Michael Hichborn] The United States Conference of Catholic Bishops, through the Catholic Campaign for Human Development (CCHD), is funding organizations actively involved in calls for revolution, the killing of police officers and the defunding of police departments.
All of this follows a long and sordid history of the CCHD providing millions of dollars to organizations that have long served as communist front groups, waiting for the right time to spark a Marxist revolution. See our article titled "The Marxist Core of the Catholic Campaign for Human Development."
In the wake of the ignoble death of George Floyd, violent riots have erupted in cities all across the country, resulting in billions of dollars of damage and stolen goods and the murder of at least two police officers. Hundreds of officers have been targeted as a result of violent rhetoric coming from the riots. In New York, two officers were shot and one stabbed in the neck after being ambushed by rioters. Four other officers were shot in St. Louis while they stood in a police line. Two officers were shot by a rioter in Richmond, VA. In Oakland, CA, two officers were shot (one killed) in a drive-by ambush. Others have been hit by bricks, baseball bats, rocks and even a car.
https://www.churchmilitant.com/news/article/us-bishops-agency-funds-groups-calling-for-the-killing-of-cops-rebellion-and-rioting
Read the entire thing at Lepanto Institute.
AMDG
Posted by Tancred at 10:27 AM 7 comments:

Edit: professional Catholics are the worst of the worst and anyone who's been around this site for more than a few years knows that we really despise Bill Donohue. Like an inner-city youth leader defending the crimes of local "youth", he's on the scene to defend his constituents, no matter what evil they've perpetuated, he'll jump to their defense. Instead of attacking the people pointing out how the Bishops hate their host nations, despise the West, despise the Catholic Faith, why not defend the Catholic Faith, instead, even though it's not as lucrative...

Steve Banon is absolutely correct about the bishops. They are a political extension of the DNC and like the DNC they see their political power enhanced by the invasion of immigrants. This is manifestly true and it's the mission of Pro-Catholics like Donohue to keep the laity from seeing this obvious fact.


[Catholic League] Catholic League president Bill Donohue comments on a remark made by Steve Bannon that will air on “60 Minutes” on Sunday:

There is nothing wrong about criticizing the bishops for any position they take on public policy, though when invidious motives are ascribed to them, such conjecture is unacceptable. That is what Steve Bannon has done with regard to their statements on immigration.

It is certainly true that most of the bishops promote a liberal position on illegal immigration. That is open to fair criticism, but to say that their motive is to “fill the churches” is inaccurate and unfair. Indeed, it feeds the worst impulses of anti-Catholics. The bishops are making their case based on their compassion for the dispossessed.

Link to Pro-Catholic Website... Notice how these leftist journalists are practically jumping to the defense of the Catholic Church. And he's a boomer.

Edit: can it really be that the USCCB is not only completely useless and expensive but evil as well? This catholic flavored public official "sometimes attends Mass" and even has some religious iconography in her office. The Catholic Faith motivates her. Did it motivate her to get a 100% approval rating from NARAL when she was a congressperson?  Here's the blurb from Catholic World Report:

US Secretary of Labor Hilda Solis (CNS)
A news brief on Catholic Culture highlights a recent article by Mark Zimmerman for Catholic News Service, the editorially and financially independent news media division of the United States Conference of Catholic Bishops. The article in question – which will be running in diocesan newspapers all over the country in time for Labor Day – is a puff piece on US Labor Secretary Hilda Solis that focuses on her parents’ inspiring faith and tireless work ethic, as well as how Solis’ Catholic faith “motivates” her.


We get a description of the crucifix and statue of Mary Solis keeps in her office, and are told that she “sometimes attends Masses at the Cathedral of St. Matthew the Apostle in downtown Washington.” There is also a detailed account of Solis’ many efforts on behalf of the poor, especially migrant workers, during her tenure as a congresswoman from California and then as labor secretary. Solis was the first woman to receive the prestigious John F. Kennedy Profile in Courage Award, “for her work on environmental justice issues,” the article states.
However, this glowing account of a Catholic public servant fails to mention a couple facts about her time in office, including her 100% pro-choice rating from NARAL Pro-Choice America (and a corresponding 0% rating from the National Right to Life Committee).