The total demolition takes place.  Soon the gruesome work will be complete.  by Fritz Kraussmann. 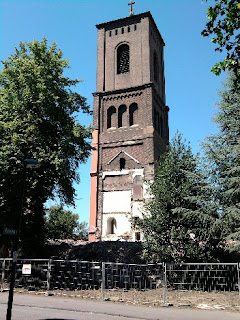 The destruction was planned for a long time.

Already on the 3rd of March 2010, said Father Johannes Roemelt - the Superior of the German Redemptorists -- to the 'Westdeutschen Allgemeinen Zeitung', that the renting of the cloister buildings to another order is impossible.

The Conciliar Church has brought about the destruction of the Faith.

The Tower as the Last Epitaph

What the Nationalist Socialists couldn't accomplish during the Second World War, is being completed by the Conciliar Church.

The Cloister which had been completely rebuilt after the war will be destroyed by the Redemptorists and the Diocese of Essen.

Germany: The End of a Monastery Church

Edit: what was painstakingly rebuilt with much sacrifice after the war will disappear in a short while.  The Diocese looks like a beneficiary of the end of a century of religious life in this locale.  Spiritual capital frittered away...


What took generations to build will now be destroyed.  The last thing the Pastoral Council implements is the bulldozer.

(kreuz.net)  For the people of Bochum it is gruesome to see, how a work, which has stood for a century will be destroyed.

It is the monastery church of the Redemptorists at Imbuschplatz in the town of Bochum.

Destroyed in the War


The Cloister church was completely  burned in the confusion of war through the bombing of the Anglo-American air forces in 1943.

Immediately after the end of the war the rebuilding began immediately with greatest sacrifices of the remaining parishioners.

Dr. Ing Huber Vieth was foremost in the effort then.

In a blameless situation


Initially, 18 years ago the eastern front of the giant nave was completely sheathed in copper.

The windows were double paned.

The was in a intact condition and had no structural deficiencies.

Under the laws regarding monuments in the city of Bochum there was no inducement to put the newly completed construction under protection.

The Demolition Work Has Begun

The last eight Redemptorists under the leadership of Father Wolfgang Gerhards (71) have given up the cloister already in January of 2011.

The order has suffered the loss of much of its dynamism since the Pastoral Council.

Bishop Franz Josef Overbeck of Essen clearly had no interest or possibility to hold the cloister.

Thus, the demolition work has begun.

The Lazy Fruits of the Council

Who knows, who hides behind the new bearer --- perhaps the Aachen Residential Building Association, that the Diocese of Essen has a 61 percent share in?

It was the case with other church demolitions in the Diocese of Essen.

In the Diocese of Essen more than 130 churches have been simply locked up already by the order of the Bishop.