(Vatican)  Msgr Luigi Negri (71) is one of the most striking Italian Bishops was named by Pope Benedict XVI as the new Archbishop of Ferrara.  The Pope is very close to the Bishop.  His profession as Bishop of San Marino and Montefeltro was one of the last official acts of Pope John Paul II.   A much greater connection to the combative Bishop is shown by Pope Benedict XVI.  In the last year the head of the Church visited the small Diocese, which also includes the resting place of Saint Marino, in a pastoral visit. A particular sign  of approval is Msgr. Negri's holds a disposition of an unabbreviated message and the necessity of a confident Church.  For this reason Pope Benedict appointed him, about which the Italian Bishops' Conference did nothing, because of this personally in the Bishops'  Synod in October in Rome.   Then followed his elevation to Archbishop.

Archbishop Negri was born in 1941 in Milan.  There he visited the  Gymnasium for the Humanities,  where he met Don Luigi Giussiani and entered this student movement.  From 1965 to 1967 he was the first president in the Archdiocese of Milan. Msgr Negri graduated from the Catholic University of Milan and was then the assistant of the renowned neo-Thomist Professor Gustavo Bontadini in the Seminary and was ordained in June of 1972 by the former  Archbishop of Milan, Gioanni Cardinal Colombo.

In the society of Communion and Liberation of Don Giussiani Msgr. Negri was responsible above all for the area of school and formation.  His special point of attention lay in what was then the Catholic Social Teaching.  At the Catholic University of Milan he taught History, Philosophy and Introduction to Theology.  He is the author of numerous specialist works above all about the magisterium of Pope John Paul II.  Since 2010 he has been a collaborator of the Catholic internet publication La Bussola Quotidiana (The Daily Compass) and president of the Fondazione International Gioanni Paolo II per il Magistero Sociale della Chiesa (International Foundation of John Paul II for the Social Teaching of the Church), whose honorery committee includes Professor Nikolaos Lokowicz and Paul Josef Cardinal Cordes from the German speaking areas, and till his death, the [Emperor] Otto Habsburg.  The scientific committee includes  numerous others like Bologna's Archbishop Carlo Cardinal Cafarra, the Secretary of the Pope, Msgr George Ganswein, Karl Habsburg, Professor Waldsstein, malcom Cardinal Ranjith and the biographer of John Paul II., George Weigel.

The Episcopal consecration received by Msgr. Negri by Dionigi Cardinal Tettamanzi, the former Archbishop of Milan.  He follows now for a second time his predecessor Msgr. Rabitti, who was Bishop of San Marino from 1995 to 2004 and then became Archbishop of Ferrara in 2012.
suffagrens
The chief shepherd of Ferrara bears the title of Archbishop, the Diocese is yet a small metropolitan district, and thus has no suffragren.  This particularity goes back to the time of the Church State.  Ferrara belonged in late antiquity to the Byzantine Exarchate of Ravenna and was added to the Kingdom of the Lombards in 774.  From 1589 to 1859 it answered directly to the Papal Legation of the Church State.

Link to katholisches...
Posted by Tancred at 12:15 PM No comments:

Resistance Against the Homosexual Comrades

France.  Two thousand French mayors are asking of French President, Comrade Francoise Hollande, that no homosexual marriages are to be conducted. On Wednesday, the speaker of the Socialist government, that no mayor will be able to fall back on his conscience.

Germany.  Eva Demmerle (45) is resigning from her post as Press Speaker of the Diocese of Limburg after only three months for family reasons.  This was reported by the site 'mittelhessen.de'.  Frau Demmerele made her decision while on vacation.  She was the Press Speaker of the Emperor's eldest son Otto von Habsburg (+ 2011).

On November 6th the Chinese Underground Bishop Samuel Guo Chaunzhen (94) died. This was reported by Vatican newspaper 'L'Osservatore Romano' recently.  The deceased began in 1944 with his priestly ordination.  After the Cultural Revolution he spent sixteen long years in a work camp and under house arrest.  In 1963 the Communists forced him to work in the food industry, so that he could not be active as a priest.  Then 19 years later he could work as a pastor.  In 1983 he founded a Seminary in eastern China.  In 1988 he was named by John Paul II as the Auxiliary Bishop of the Archdiocese of Jinan.

Hate as an Answer to Truth

Germany.  On Monday the famous Cologne Capuchin, Father Paul Terwitte, in the broadcast 'Hart aber fair" in the forced church tax broadcaster 'ARD' about euthanasia.  In the broadcast Witwer introduced a lady who had been euthanized by a Death Doctor.  The priest asked the husband: "Why should your wife conduct her suicide with the help of a doctor?  Why didn't you find a razor with which she could have cut an artery?"  Already during the broadcast, there was a hate campaign against the critics of euthanasia.  On Wednesday the intimidated priest apologized on 'twitter.com'.  In a forced church-tax broadcaster he should have asked "more sensitive questions".  He still remains, however, an opponent of euthanasia.

Insurance Fund Pays for the Killing of their Customers

Holland.  The Netherlands introduces euthanasia on a health insurance certificate.  The Insurance Fund 'Menzis' has already been working since March together with mobile death teams. The governing body of the Insurer openly lets its members offer euthanasia.

Response to Attack on Otto Habsburg

I read Dr. Srdja Trifkovic’s highly coloured article on ChroniclesMagazine.org about the recently deceased Archduke Otto of Austria with a mixture of surprise and concern.  Not a single one of his sources supported the entirely negative picture that he drew.
Let’s see why.
“Habsburg was an enthusiastic supporter of the Jihadist side in the Bosnian civil war, visited Sarajevo repeatedly during that war, and had several meetings with Alija Izetbegovic.” 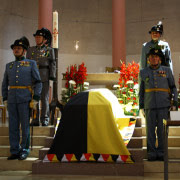