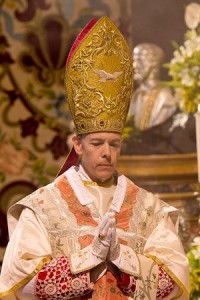 Editor: Well, some of the critics of the new Missal seem to be indicating that the New Missal won't be that great, "for many" translation notwithstanding.  It sounds like the rework of the 2008 Revision has been revised again.  It juts goes to show you if you try to please everyone, you please no one.  Do these people still worry about pleasing God?  The Music looks horrible.  Anything with Dan Schulte on it is bound to inspire revulsion, and if Oregon Catholic Press is doing it, you know it's got to be less than virile.  Just check out the cover art.  So, yes, the thing will be done, but the usual old Left apparachiks are going to benefit from it, to the further denigration of everything.

PORTLAND, Ore., Dec. 7 /Christian Newswire/ -- To help church leaders prepare their communities for the new English translation of the Roman Missal, OCP has given free download access, including unlimited reprint permissions, for assembly editions of every new and revised Mass setting the publisher offers.

"This access provides parish leaders a unique chance to teach their congregations the new and revised Mass parts," said Tom Tomaszek, OCP's Director of Artists and Repertoire and Product Development. "By offering assembly editions of the revised Order of Mass for download, free of charge, we can aid our partners in ministry in implementing these changes smoothly."

The downloadable assembly editions contain the lyrics and melodies for all the Mass parts in a single, easy to read PDF for each of the new and revised settings. Although the changes to the Roman Missal cannot be used during Mass until Advent 2011, these assembly editions give congregations everywhere the ability to learn and sing the new texts -- one year in advance.

"We want to encourage church leaders to take advantage of this opportunity to explore the changes and ultimately find Mass settings in styles that work well with each of their assemblies and musicians," said Tomaszek.

Help your congregation sing the new translation with FREE assembly edition downloads of new and revised Mass settings to engage your community.

For a limited time*, we are offering FREE assembly edition PDF downloads to help make the transition as smooth as possible for your community. Simply click below to download assembly editions of each Mass setting in its entirety—conveniently in a single PDF.
* Available through November 26, 2011
http://www.ocp.org/newmasssettings/freeassemblydownloads

Believe it or not, heresy is a greater crime than abusing children and one begets the other. The great crimes of the heretical Bogomils in the 13th Century were always accompanied by sexual depravity; but they weren't just performed in modern Europe but in ancient Sparta as well where among the pagans, it was not generally held as a crime. These crimes are not being committed by devoted Catholic priests, indeed, overall, even with the American Church's own struggle with heresy, leaves a child considerable safer in Her institutions when compared to other organizations like Hollywood, the Rabbinate of New York City or the Public School system. Ironically, the prohibition against the practices of abusing children were originated in Catholicism and pre-Christian Judaism.

Unfortunately, here in America, again, the problem with heresy, people aren't so much concerned about Justice, a Catholic virtue, but with money and ultimately, the destruction of the Catholic Faith in America.

Amid ads for condoms, dating sites, Planned Parenthood and with some heavy endorsement from gay-friendly David Cohessey, one side cuts while the other side holds as they attempt to dismember the Catholic Church. The Jesuits by their wilful and well planned program of promoting clerical homosexuals to positions of trust, and then you get the legal role played by advocacy organizations like SNAP who scoop the victims up as fodder for a political agenda far beyond mere justice. David Clohassey leaves little mystery as to where, or to whom, his allegiance lies and you can almost detect the spit and bile as he hatefully writes,

The church's actions clearly show that it is in touch with something other than the god the people expect or the god this failed religion speaks of. When perverted incomplete men such as these fail as they have and as they will blindly continue there is a need to see them exposed as the frauds they are. Gods representative?

One spring afternoon in 1977, 15-year-old Rachel Mike tried to kill herself for the third time. An Alaska Native, Rachel was living in a tiny town called Stebbins on a remote island called St. Michael. She lived in a house with three bedrooms and nine siblings. Rachel was a drinker, depressed, and starving. "When my parents were drinking, we didn't eat right," she says. "I just wanted to get away from the drinking."

Rachel walked to the bathroom to fetch the family rifle, propped in the bathtub with the dirty laundry (the house didn't have running water). To make sure the gun worked, Rachel loaded a shell and blew a hole in her bedroom wall. Her father, passed out on his bed, didn't hear the shot. Rachel walked behind their small house. Her arms were too short to put the rifle to her head, so she shot herself in her right leg instead.

The only reason Poole is not in jail, Roosa says, is the statute of limitations. And the reason he's still a priest, being cared for by the church?

"Jim Poole is elderly," answered Very Reverend Patrick J. Lee, head of the Northwest Jesuits, by e-mail. "He lives in a Jesuit community under an approved safety plan that includes 24-hour supervision." [The fox is indeed, guarding the roost here]

Roosa has another theory—that Poole knows too much. "They can't put him on the street and take away his reason for keeping quiet," Roosa says. "He knows all the secrets." [That's not necessarily true. Many others have left the priesthood and they haven't sung like canaries. Others have gone to prison and haven't mentioned a single word. Fortunately for Poole, and unfortunately for his victims, however, statute of limitations is exceeded. Perhaps a return to the Inquisition is in order?]

Father James Poole's story is not an isolated case in Alaska. On the morning of January 14 in Seattle, Ken Roosa and a small group Alaska Natives stood on the sidewalk outside Seattle University to announce a new lawsuit against the Jesuits, claiming a widespread conspiracy to dump pedophile priests in isolated Native villages where they could abuse children off the radar.

"They did it because there was no money there, no power, no police," Roosa said to the assembled cameras and microphones. "It was a pedophile's paradise." He described a chain of poor Native villages where priests—many of them serial sex offenders—reigned supreme. "We are going to shine some light on a dark and dirty corner of the Jesuit order."

Oregon Province Sexual Abuse Claims Reach 500 and that's almost more than what Cardinal Mahony has against him.

Losing's a Habit and the Jesuits are Losing...
Posted by Tancred at 3:24 PM No comments:

Remember Oregon, with all the sex-abuse claims from the Jesuits?

STREET ROOTS, a newspaper for the homeless, received $5,000 of Archdiocesan money this year that originates from the collection basket at the Holy Sacrifice of the Mass. See Dec. 17, 2009 Sentinel article: ‘Archdiocese of Portland Presents Grants to Anti-Poverty Groups.’

“When the bishops formed the CCHD, they wanted to take a step beyond charity,” Archbishop John Vlazny says, explaining the program as a complement to the work of Catholic Charities and other groups.

The idea of the bishops was to help the poor help themselves via economic development. The campaign is still choosy about whom it funds, Archbishop Vlazny says, making sure all church criteria are met.

The national campaign backs projects, but so do local dioceses. The three local grants given last week were selected with the help of a committee guided by Matt Cato, director of the archdiocese’s Office of Justice and Peace and Respect for Life. [Emphasis added.]

The Rose City Resource guidebook refers the homeless – under “Health Resources” – to PLANNED PARENTHOOD. Pro-Life Action of Oregon spoke with Eddie Barbosa today and he confirmed that their current guidebook lists Planned Parenthood. (He gave us the phone numbers and the Tri-Met bus numbers to take, thinking we called for directions.)

Furthermore, the guidebook online displays a MAP OF RESOURCES. We located Planned Parenthood locations on the map.


Help us continue to serve the community by donating to the Rose City Resource via a secure link through our friends at Democracy in Action.


Are you upset as we are? We’re pretty upset. In fact, we’re angry at the sheer ignorance of those at the Archdiocese in charge of our money.

A soup kitchen would be better!! Donate to the poor DIRECTLY!

Planned Parenthood is an enemy of the Catholic Church. Just look at this fund raising ad which mocks Our Lord’s birth: CHOICE ON EARTH.

Who else mocks Jesus Christ? SATAN. He is the prince of lies.