Veto Against the Nobel Prize for a Pope 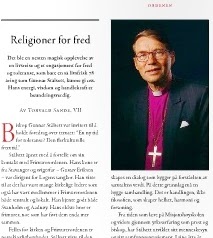 (Oslo) This year's Nobel Peace Prize was awarded, but again not to a Catholic Pope. Neither Pope Francis, although there were significant rumors in this direction he was the first pope in the running. Not only the Catholic Church but especially the papacy is a stumbling block some circles. This also true of the Masonic founders of the Nobel Prize, and  also counts the trustee of its Foundation.
Year after year enthusiastic Catholics  brought the application in vain for the prize committee to bestow the Nobel Peace Prize on Pope John Paul II.   It  seemed  that in comparison to other awardees, nobody was a more appropriate candidate than the Catholic Church leader. Fundamental ideological prejudices they can not bring into account. This has described the history of the Nobel Peace Prize   since its first award in 1901 and the non-observance by the Prize Committee of the peace efforts of Pope Benedict XV.  speaking clearly to end of the First World War
In 2001 a little look behind the scenes was granted. At that time Gunnar Stålsett, Member of the Prize Committee and former Lutheran Bishop of Oslo, justified his refusal of John Paul II. Giving the Nobel Peace Prize.There will be no Nobel Prize so long as a Pope of the Catholic Church will  not change their sexual teaching.
So there was a formal veto against the awarding of the Nobel Prize to John Paul II., But not only against him but in principle to a Pope, because the Catholic Church and its teachings are rejected. I Gunnar Stålsett  afforded a look at the  cards of the prize committee, as he wanted to but refrained from saying anything that explains this fundamental hostility.
Stålsett incidentally boasts of its excellent contacts with Freemasonry. His father was Worshipful Master and his older brother is a lodge member. The Norwegian Frimurerbladet (1/2014) reported on a lecture by the Lutheran bishop in the circle of  aproned brothers on "religion of peace".
The veto which was announced by  Stålsett in 2001, was not repealed for Pope Francis.
Text: Giuseppe Nardi
image: Frimurerbladet (Screenshot)
Trans: Tancred vekron99@hotmail.com
Link to Katholisches...
AMGD
Posted by Tancred at 10:04 PM 5 comments: 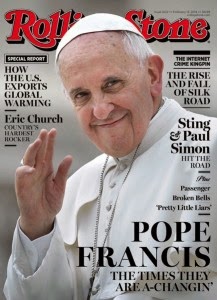 Francis Gives "New Hope for a Reform of the Catholic Church" 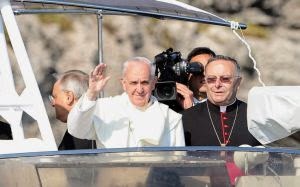 Pope Francis 2013 on Lampedusa
Kristian Berg Harpviken, the Director of PRIO typed in the awarding of this year's Nobel Peace Prize to Pope Francis. His conjecture based political scientist with the "tireless commitment to the fight against global poverty." Poverty, says Harpviken, is the main reason for armed conflicts. The reference to the images of the Pope on the Italian Mediterranean island of Lampedusa off the coast of Tunisia comes to mind. A few days ago, the Pope met with survivors of a shipwreck off Lampedusa, whose ship was capsized while trying to immigrate to the EU.
On the grounds of "combating poverty"   Mother Teresa of Calcutta has already been recognized, although she was exceptional as a Catholic nun. But then Harpviken is concrete: Another reason for his assumption that Francis could be awarded the Nobel Prize,  Harpviken sees in the "new hope for a reform of the Catholic Church." Is the award of the Nobel Peace Prize a distinction for certain internal church decisions? Who would  interfere in internal Church affairs in the spirit of the Masonic founder, but a left-liberal prize committee?

In 2013 the International Anti-Chemical Weapons Organization (OPCW) was awarded the Nobel Peace Prize, in 2012 the European Union. Unwieldy laureates, with little ability to evoke emotion during their ceremony. Particularly controversial, even grotesque, was the granting in 2009 of the newly elected U.S. President Barack Obama. The otherwise subdued ideological coloration  shown in the idea behind the award ceremony has  rarely been revealed so blatantly.
Also mentioned by the Pope introducing PRIO-top group of five favorites is the revealer of the NSA wiretapping scandal, Edward Snowden, the Putin-critical Russian newspaper Novaya Gazeta and two "neutral" applications,  of the Congolese gynecologist Denis Mukwege and Pakistani children's rights activist Malala Yousafzai.   All in all, a new record was achieved with 278 applications, among which is also the application of the International Gay Lobbyists ILGA.
Text: Giuseppe Nardi
image: Fromiche / Rolling Stone
Trans: Tancred vekron99@hotmail.com
Link to Katholisches...
AMGD
Posted by Tancred at 7:52 PM 17 comments:

News Bytes: The Rotten Fruits of the Council -- Will the Church Become a Mosque?

France:  The Rotten Fruits of the Council -- Will the Church become a Mosque? -- Homosexual Bullying Bears Fruit -- Went off Quickly Without a Hitch -- Now Come the Clones

France.  In 1961 -- a year before the start of the Pastoral Council -- 35% of the French went to the Latin Mass of the Roman Rite every Sunday.  Fifty years later, after the start of the Second Vatican Council only 6% of the French -- at least once a month -- attend the New Eucharistic Celebration.  This is from a study of the public opinion researcher 'Ifop'.  In 1961 over 90% of Frenchmen were Catholic.  Now about 80% are baptized.  In all, about 30% of those under 35 are approximately 30% heathen.

Will the Church Become a Mosque?

France.  One Church in the 27,000 population city of Vierzon in central France may become a Mosque.  In the city there are six churches and 300 practicing Catholics.  That's why the church, St. Eloi, built in 1955 will be sold.  The buyer shows itself to be the "Union of Moroccans".  It will transform the church into a Mosque.  The Diocese of Bourges explained that it is still not decided to whom the will be sold off for peanuts.

Austria.  On Saturday the Salzburg Auxiliary Bishop Andreas Laun celebrates his 70th birthday.  On his jubilee, a homosexual website congratulated him.  Msgr. Laun has refrained from commenting on the disorder.  Recently he even expressed himself in friendly terms to homosexuals and spoke of a "loving interaction" with them.

Trial Went off Quickly Without a Hitch

Vatican.  Was there secret fixing involved with the Pope-traitor Paolo Gabrielle?  This question came from the anti-Church German weekly 'Zeit'.  It is incidental that the actors of State Attorney and defense announced the judgment:  "There will possibly be a verdict before the trial's end."  Gabriele's attorney has praised the judgment as balanced.  Also, there is still the big question if there is another suspect besides Gabriele.  The Journalist Marco Ansaldo from the Italian news 'Republica' described the trial as a "fixed trial".

Sweden.  In this year there are two stem cell researchers, the Japanese Shinya Yamanaka and the Brit John Gurdon, who will win the Nobel Prize for Medicine.  They are to receive the dubious honor for the back development of cells of a grown person from embryonic stem cells.  For that it will no longer be necessary to grow and kill more children, in order to experiment with their cells.  Archbishop Anton Losinger of Augsburg warned 'Munich Kirchenradio', that this may lead to the technique of making identical clones.