Pelosi Worried About the Nuclear Codes on Her Lost Computer

Edit: if Nancy is this negligent with something this important, should she really be entrusted with them?
By the bye, my boy Parkes came through!  Let's hope Trump is in possession of these things!
(NEWSER) – The Pentagon has assured House Speaker Nancy Pelosi that there are barriers to President Trump ordering a nuclear strike before he leaves office, reports USA Today. Pelosi told House Democrats in a letter Friday that she'd spoken to "Chairman of the Joint Chiefs of Staff Mark Milley to discuss available precautions for preventing an unstable president from initiating military hostilities or accessing the launch codes and ordering a nuclear strike." A spokesman for the general confirmed the conversation, saying Pelosi called Milley. "He answered her questions regarding the process of nuclear command authority," the spokesman said. The White House issued no immediate comment.
"The situation of this unhinged President could not be more dangerous, and we must do everything that we can to protect the American people from his unbalanced assault on our country and our democracy," Pelosi wrote, per ABC News. Before the election, Milley offered reassurance that the military would stay out of any dispute involving the presidential election. "I will not follow an unlawful order," Milley told Congress. Pelosi, who has called on Vice President Mike Pence and Trump's Cabinet to remove the president, called on Republicans to follow the example their predecessors set a half-century ago, per CNN. "After years of enabling their rogue President, Republicans in Congress finally told President Nixon that it was time to go," she wrote. (Read more Nancy Pelosi stories.)
AMDG
Posted by Tancred at 1:42 PM 6 comments:

Trump in Posession of Pelosi's Laptop after Siege of Capitol -- Vatican Involved in the Steal!

Edit: as Simon Parkes mentioned before, the Vatican has been implicated in the Steal.
Update:  Lots of Stories in the MSM about Pelosi's Missing Computer
Link ...
AMDG
Posted by Tancred at 7:37 AM 9 comments:


"Therefore whoever eats this bread or drinks this cup of the Lord in an unworthy manner will be guilty of the body and blood of the Lord. 28 But let a man examine himself, and so let him eat of the bread and drink of the cup. 29 For he who eats and drinks in an unworthy manner eats and drinks judgment to himself, not discerning the Lord’s body. 30 For this reason many are weak and sick among you, and many have fallen asleep." --1 Cor. 11:27-30
Edit: Father Pavone promised an uproar if this happened. Let’s see the uproar now, please. Washington times reports:

Vice President Joseph R. Biden and House Democratic leader Nancy Pelosi both received Communion during the Mass to celebrate the installation of Pope Francis in spite of their pro-choice position on abortion.

The vice president’s office confirmed Tuesday night that both he and Mrs. Pelosi took Communion during the Mass at St. Peter’s Square in Rome.

Some [All] Catholics argue that politicians whose positions on abortion and contraception conflict with church teachings should not receive communion.


This occurred despite the fact that when he was Archbishop of Buenos Aires, he was against pro-abort politicians there receiving Holy Communion.  Neither one of these heretical politicians have commented on their crime so far.

According to the Puffington Post, Nancy Pelosi was specifically addressed by Pope Benedict:

When Pelosi met Benedict in 2009, the Vatican released a statement saying the pope spoke to her about the "requirement of the natural moral law and the Church’s consistent teaching on the dignity of human life from conception to natural death which enjoin all Catholics." Biden also met Benedict in 2011, but the details of their conversation were not released.

Worthiness to Receive Holy Communion: General Principles Cardinal Joseph Ratzinger Prefect, Congregation for the Doctrine of the Faith [Note: The following memorandum was sent by Cardinal Ratzinger to Cardinal McCarrick and was made public in the first week of July 2004.]

1. Presenting oneself to receive Holy Communion should be a conscious decision, based on a reasoned judgment regarding one’s worthiness to do so, according to the Church’s objective criteria, asking such questions as: "Am I in full communion with the Catholic Church? Am I guilty of grave sin? Have I incurred a penalty (e.g. excommunication, interdict) that forbids me to receive Holy Communion? Have I prepared myself by fasting for at least an hour?" The practice of indiscriminately presenting oneself to receive Holy Communion, merely as a consequence of being present at Mass, is an abuse that must be corrected (cf. Instruction "Redemptionis Sacramentum," nos. 81, 83).

2. The Church teaches that abortion or euthanasia is a grave sin. The Encyclical Letter Evangelium vitae, with reference to judicial decisions or civil laws that authorize or promote abortion or euthanasia, states that there is a "grave and clear obligation to oppose them by conscientious objection. [...] In the case of an intrinsically unjust law, such as a law permitting abortion or euthanasia, it is therefore never licit to obey it, or to 'take part in a propaganda campaign in favour of such a law or vote for it'" (no. 73). Christians have a "grave obligation of conscience not to cooperate formally in practices which, even if permitted by civil legislation, are contrary to God’s law. Indeed, from the moral standpoint, it is never licit to cooperate formally in evil. [...] This cooperation can never be justified either by invoking respect for the freedom of others or by appealing to the fact that civil law permits it or requires it" (no. 74).

3. Not all moral issues have the same moral weight as abortion and euthanasia. For example, if a Catholic were to be at odds with the Holy Father on the application of capital punishment or on the decision to wage war, he would not for that reason be considered unworthy to present himself to receive Holy Communion. While the Church exhorts civil authorities to seek peace, not war, and to exercise discretion and mercy in imposing punishment on criminals, it may still be permissible to take up arms to repel an aggressor or to have recourse to capital punishment. There may be a legitimate diversity of opinion even among Catholics about waging war and applying the death penalty, but not however with regard to abortion and euthanasia.

4. Apart from an individual's judgment about his worthiness to present himself to receive the Holy Eucharist, the minister of Holy Communion may find himself in the situation where he must refuse to distribute Holy Communion to someone, such as in cases of a declared excommunication, a declared interdict, or an obstinate persistence in manifest grave sin (cf. can. 915).

5. Regarding the grave sin of abortion or euthanasia, when a person’s formal cooperation becomes manifest (understood, in the case of a Catholic politician, as his consistently campaigning and voting for permissive abortion and euthanasia laws), his Pastor should meet with him, instructing him about the Church’s teaching, informing him that he is not to present himself for Holy Communion until he brings to an end the objective situation of sin, and warning him that he will otherwise be denied the Eucharist.

6. When "these precautionary measures have not had their effect or in which they were not possible," and the person in question, with obstinate persistence, still presents himself to receive the Holy Eucharist, "the minister of Holy Communion must refuse to distribute it" (cf. Pontifical Council for Legislative Texts Declaration "Holy Communion and Divorced, Civilly Remarried Catholics" [2002], nos. 3-4). This decision, properly speaking, is not a sanction or a penalty. Nor is the minister of Holy Communion passing judgment on the person’s subjective guilt, but rather is reacting to the person’s public unworthiness to receive Holy Communion due to an objective situation of sin. [N.B. A Catholic would be guilty of formal cooperation in evil, and so unworthy to present himself for Holy Communion, if he were to deliberately vote for a candidate precisely because of the candidate’s permissive stand on abortion and/or euthanasia. When a Catholic does not share a candidate’s stand in favor of abortion and/or euthanasia, but votes for that candidate for other reasons, it is considered remote material cooperation, which can be permitted in the presence of proportionate reasons.]
Posted by Tancred at 11:08 AM 5 comments:

Some are insisting that the USCCB's unfortunate love affair with collectivism is an example of Bishops being incapable of talking outside of spiritual affairs. If they actually referred to Church teachings on subsidiarity and considered the cancerous relationship they maintain as lapdogs of collectivism and the price to integrity they pay when they align themselves with liberal platforms, no doubt, they'd be well within the bounds of their spiritual and temporal authority. No doubt, many of the Bishops do appeal to a kind of backwater, Jim Jones style spirituality when they support Democratic National Committee talking points.

It's fair to say that the USCCB is in many respects politically liberal and that they've always failed to maintain an independent voice with respect to economics and politics, as when they drafted a letter against Nuclear Armament with the now disgraced perjuring embezzler Archbishop Rembert Weakland and Cardinal Bernardin or when earlier in the century, the liberal Archbishop Ireland supported American Imperialism in the Spanish American War and the temperance movement. This demonstrates a clear history [George Weigel, Wanderer] of the Catholic hierarchy in the United States historical committment to liberalism in opposition to actual Church teaching in this regard.

The opposition of the Bishops to so-called Health care Reform has hinged primarily upon the issue Abortion, and now, with some last minute concessions by their Democratic masters, many of them will acquiesce and endorse the rest of the bill. Of course, the concessions will be ineffective in the long run and will no-doubt include concerns about the health and welfare of the mother and cases of rape or incest.

The American Catholic leadership, which has always had a subservient role to American Government, have a long way to go before they cut the purse strings that make them little more than puppets of an increasingly national Catholic Church.

According to Lifesite News, Archbishop Rigali has only praised the Stupchak amendment to the Bill, disincluding abortion coverage and supporting the unborn. However, the Secretary of the USCCB for pro-life secretariat says he still insists that they are for "Healthcare Reform". 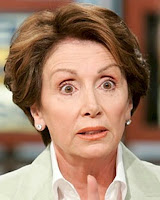 Most people wouldn't trust this woman to watch their children. Don't allow the government to turn your community into a medical petri dish.

During the 90s, Harvard Medical School was using the Austian National Health Service as a source of medical experiments for proceedures as part of a study to get them approved in the United States; some patients lived, others died.

This is the kind of high-handed contempt that awaits us at the hands of mad scientists looking to patent new proceedures and make some lucre.

Link to Catholic Family News...
Posted by Tancred at 10:43 AM No comments: