[Barnhardt] Folks, the issue here is the RAGING hypocrisy. Yeah, this HAS to be called out. Bear in mind, the whistle-blower in the case was Opus Bono Sacerdotii‘s co-founder’s daughter, Mary Rose Maher.

Fr. Perrone of Assumption Grotto in Detroit was the second co-founder. Read this piece. It is horrific. If Church Militant and Voris don’t fess up to this wild hypocrisy and projection and apologize to the SSPX bigly and publicly, this should be their demise.  [The article she links to has been deleted, so I offer this one instead which shows how the founders of Opus Bono Sacerdoti were found guilty by the Attorney General of misusing funds.  Even the Irish Press picked it up..]

This is just awful..


A title like this would have been more prudent at America Magazine. 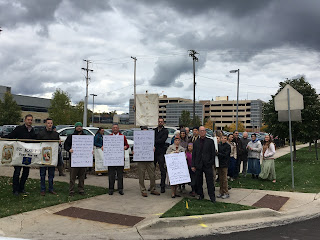 Bishop Trautman reminesces about how wonderful it was to be at the Vatican Council and how much it embodied his vision for the Church. Considering the many things Bishop Trautman believes, contrary to Catholic teaching and practice, perhaps this isn't exactly a ringing endsorsement for Vatican II, but rather a condemnation.

The people who are fighting to go back to Latin, for example, had a wonderful experience when Mass was in that language. They're saying they met the Lord that way, and they're trying to keep that form, not understanding that the form and language of the liturgy is never an absolute. Only God is absolute, and there are different ways we express our love and our prayer.