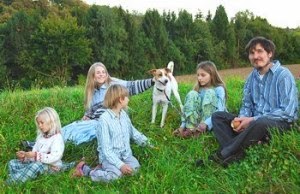 [Kreuz] Last week two policemen in uniform with their squad cars came by looking for me.

They were sent by the court of Dorsten,  in order to ask if I had received the court summons for the date of May 26th.

It was related to an alleged misuse of titles.

The summons was on April 15th as an "official notification" -- which means, with certified mail -- sent to me in my mailbox.

On 17th of April more people protested with faxes against the persecution of the Catholic Faith by the so-called District Court of Dorsten and the so-called Public Prosecutor's Office of Essen.

Thus this made it clear that this "summons to a court date with the issuance of an arrest warrant".

On April 28th I disseminated on the Internet and by fax a press release "court appointed attorney by reason of the difficulty of the case  or legal situation".

I insisted that the  main hearing of the absolute will to injustice -- concretely in the persecution of Christians and the destruction of the Church by the BRD -- will be made clear:

"The author asked for that reason as possible many volunteers, who could be witnesses in the trial and the world, that the BRD has oppressed here in the worst way the absolute indisputable human right for the avowal of the true religion.

Why is the Court asking me at all?

When I asked the police if the defendants are usually asked if they will appear to a court date, I received the answer, "No!"

Then came the key question: "Have you ever been a violent person?"

Naturally I'm not a thug and to that effect also have never been identified that way.

Objectively I have no previous convictions.

The both offenses attributed to me -- "abuse of title" or "libel" -- are groundless.

I understand that it is usually done for notorious lawbreakers or violent types to admonish them to appear at a court date.

But I am never advised as to my conflict with the law -- rather completely the opposite, only with the charge.

Otherwise: Is this expenditure for this procedure really justified because of an "abuse of title", really?

I would actually like to remind that I am a permanent fraud in the eyes of justice with limited chance for a reduction in criminal responsibility.

Would that the court really believe, neither would they require my appearance to the summons nor for anything it at all.

A demonstration of power

With that it's clear that the "question" of the local court is not on the grounds for information.

They appear to be conceived as a pure demonstration of power.

I see myself therefore strengthened in my conviction, that the BRD would shrink from no method, no matter how brutal, to damage the Church.

The BRD is a land where those who beat people unconscious and murder can run free.

At the same time they send there two uniformed policemen to ask a respectable Catholic priest after a post delivery instead of pursuing actual lawbreakers.

Here we could point out that the BRD has room for improvement.

Link to original...
Posted by Tancred at 9:35 PM No comments:

Editor: Checking on the effectiveness of this attorney. In Bishop Williamson's defense, it must be said that this attorney might be exceptional at getting his clients a fair shake in the German Courts when it comes to these kinds of cases.


Additionally, it seems that the hiring of this particular attorney was a good idea in terms of Bishop Williamson's defense.  He's been very effective.  Here's a response from Ignis Ardens forum:

Yes, he has handled such cases: This is from a friend of mine:

I am following the news regarding the upcoming hearing of appeal. The decision to employ Wolfram Nahrath was a good one. Nahrath is the only one who dares to submit factual evidence as evidentiary motions in such trial. And he is very versed and defended recently Kevin Kaether. The court dropped eventually the case in order not have official witnesses being questioned.

The bishop, no doubt, is a hero. The higher echelons of SSPX are a despicable bunch, unfortunately.

May Jesus be with the bishop in the months to come.

We do think of this man every day and wish him all the very best.