Commemoration in Immemorial Rite for Kaiser Karl I. and Kaiserin Zita of Austria-Hungary 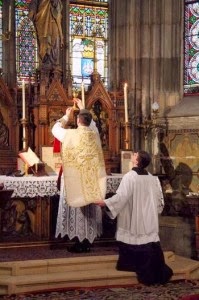 (Nancy) In Nancy, the capital of the ancient Duchy of Lorraine Holy Mass in the Immemorial Rite of All Ages was celebrated in the Basilica of Saint Epvre  of in commemoration of the Blessed Emperor Karl I of Austria and his wife, the servant of God, Empress Zita on February 8th. The celebrant was Abbé Cyrille Debris, diocesan priest of the diocese of Rouen. Name and coat of arms of the Duchy is found in the name of the Imperial House of Habsburg-Lorraine and adjacent to the Habsburg lion and the Austrian shield .
Abbé Debris is postulator for the beatification of the Empress Zita.  At the celebration of Mass Abbé Florent Husson also took part, the chaplain of the chaplaincy to the Blessed Emperor Karl von Habsburg-Lothringen and parish administrator of the Church of Mary Immaculate of Nancy.
In Nancy, in  German Nanzig, like the Mosel in French from the nearby Luxembourg on the Saarland into the German speaking part of Lotharingia some still do call it that, Archduke Imre of Austria and his wife Archduchess Kathleen members of the Imperial House, were  present.  Archduke Imre of Habsburg-Lorraine is a great-grandson of the last Austrian emperor. Also present was a relic of Blessed Emperor, which was venerated by the faithful. 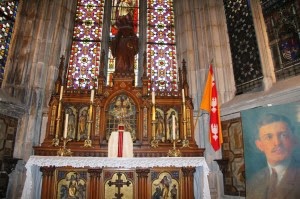 Emperor Charles I was born in 1887 in the Lower Austrian Danube as great-nephew of Emperor Franz Joseph I.. In 1907 he married Princess Zita of Bourbon-Parma. In 1914, he became heir to the throne upon  the assassination of Archduke Franz Ferdinand, Crown Prince and heir to the throne. The assassination of the Austrian heir to the throne was the cause of the outbreak of the First World War, which was in the air for some time because of economic and political interests. After the death of Emperor Franz Joseph I in 1916,  he acceded to the throne and tried to make a separate peace without the German Empire unsuccessfully  since the leaders of the Entente relied on a victorious peace. From the Entente driven resolution, a number of peoples of Austria-Hungary were constituted as independent states. On 11 November 1918 the Emperor declared  in the wake of military defeat and the revolutionary atmosphere of upheaval,  his renunciation of all official business in the Austrian half of the empire, then on 13 November also in the Hungarian half of the empire. However, he did not enact an official abdication.
On 24 March 1919 he withdrew his declaration of renunciation shortly before his transition into the Swiss exile his waivers and raised in protest against his dismissal. Attempts to restore the monarchy in Austria and Hungary failed. In 1921, the Emperor was exiled by the Entente to the Portuguese island of Madeira, where he at first arrived on April 1st, 1922, dying at only 35 years of age  of pneumonia. In 2004 he was beatified by Pope John Paul II.  The Blessed is buried in the church of Nossa Senhora in Monte in Madeira. His heart was transferred according to the old Habsburg tradition to the Benedictine monastery of Muri in the canton of Aargau. A transfer of the body in the Imperial Crypt in Vienna, where the grave of the Imperial House lays is not provided because of the devotion of the people of Madeira. In the Imperial Crypt, however, lies his deceased wife, Empress Zita who was buried there in 1989.
For the beatification particularly the Kaiser Karl Prayer League strove for world peace, whose chairman is the emeritus Archbishop, Fernand Franck of Luxembourg today. The beatification was promoted especially by the recently deceased Bishop Kurt Krenn of Sankt Pölten, who for many years was chairman of the prayer league.
The Basilica in Nancy, in which the Holy Mass was celebrated, is named after the Frankish Saint Aper, who at the beginning of the 6th Century was bishop of Toul. The saint is known in the French as Saint Epvre, to the Germans as Santa Effert.
Text: Giuseppe Nardi
Image: Histoire & Patrimoine Bleurvillois
Trans: Tancred vekron99@hotmail.com
Link Katholisches...
AMGD
Posted by Tancred at 7:33 PM 3 comments: 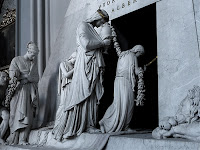