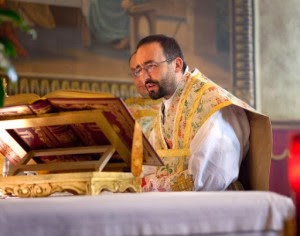 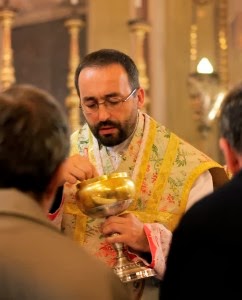 Edit: Gary Wills might be a Unitarian posing as a Catholic to sell books, but his claims are as absurd as are his claims to categorically absurd. He denies several points of Catholic Dogma during the interview: inerrancy of scripture, the priesthood, and very notably, the dogma of transubstantiation. He even speciously accuses St. Augustine of not believing in it, which is manifestly false.

A patheos blogger does some groundwork below the video:

I’ve never read any of Wills’ works, but I’ve read enough of St. Augustine to know that his assertion rings hollow. A quick search on the interwebs reveals a treasure trove of quotes from Augustine’s oeuvre to make Joe Six-Pack pretty comfortable in deciding that I’ll stick with Augustine (and Justin Martyr, Irenaeus, Cyril of Jerusalem, etc.) and ignore the self-deceiving sophistry of Wills. Take a gander at the Augustine citations found on Early Christians on the Holy Eucharist, from the Apologetics Toolkit hosted by a website out of Columbia University. Here is the thought that Wills centered his comments around Augustine upon, assuming the rest of us are ignorant of the breadth of commentary on the subject written by the Doctor of Grace, St. Augustine, Explanations on the Psalms, A.D. 392-418, [98, 9]:

`Unless he shall have eaten My flesh he shall not have eternal life. [John 6:54-55]‘ [Some] understood this foolishly, and thought of it carnally, and supposed that the Lord was going to cut off some parts of His Body to give them … But He instructed them, and said to them: `It is the spirit that gives life; but the flesh profits nothing: the words that I have spoken to you are spirit and life’ [John 6:64]. Understand spiritually what I said. You are not to eat this Body which you see, nor to drink that Blood which which will be poured out by those who will crucify Me. I have commended to you a certain Sacrament; spiritually understood, it will give you life. And even if it is necessary that this be celebrated visibly, it must still be understood invisibly.

The far sighted Cardinal James Louis McIntyre of Los Angels warned expressly against intervening in the traditional Rite and a suppression of the language of the Church.


(kreuz.net) Cool headed Conciliar Fathers warned against the Second Vatican Council: A change in the Liturgy means a change in Dogma.

The Italian historian Roberto de Mattei (63) wrote this in his book, "The Second Vatican Council. A Story Untold Till Now."

The prize winning work appeared this December in Germany in "Edition Kirchliche Umschau."

The far-sighted Cardinal James Louis McIntyre († 1979) of Los Angeles expressly warned of a change in the traditional Rite and the language of the Church.

"The attack on the Latin language in the Holy Liturgy means an indirect attack, but in the truest sense on the stability of the Holy Dogma, because the Holy Liturgy necessarily contains the Dogma in itself."

The Prince of the Church then recalled that in the language of the people the meaning of words are fundamentally changed.

From that he concluded: "If the Liturgy is degraded in the common language of the people, then the unalterability of doctrine would be endangered.

From that he concluded that the Mass must remain as it is.

The Liturgy is understood visually

In the Preces of the Benedictine Congregation of Beuron, Archabbot Benedikt Reetz, warned against reform in the Liturgy.

He rejected the thesis, that one must use the language of the people, in order for them to understand the Liturgy:

Even the priest doesn't understand everything -- argued the Benedictine.

"The active participation of the faithful consist not so much in singing and prayer, rather in the visual apprehension of things, which happen on the altar."
Symbolic: the humbled Guardian of the Faith

De Mattei took up the enlightening case of Alfredo Cardinal Ottaviani († 1979), who as prefect of the Holy Office, had his microphone shut off during the Conciliar negotiations.

Cardinnal Ottaviani criticized the proposals for reform of the Liturgy.

He warned of "excessive alterations", which would harm the faithful, if not even bring them to vexation.

The Cardinal went over his allotted time to speak by ten minutes.

Thereupon the Old Liberal destroyer of the Church, Bernard Jan Cardinal Alfrink(† 1987) of Utrecht in the Netherlands, sounded the bell.

The Supreme Prefect was humbled.

The Old Liberal faction greeted the humiliation with applause.

Next time: The linguistic Nationalism was the beginning of the end.
Link to kreuz.net...