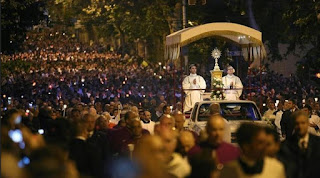 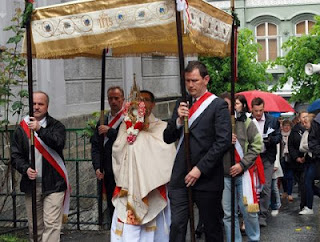 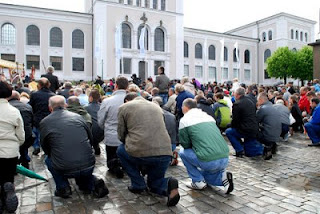 Link to Katholisches...
Posted by Tancred at 1:42 AM 9 comments:

The Glowing Heart of Religion: Cardinal Schönborn on Corpus Christi

Editor: Actually, Josephism is a heresy, not a "tradition" as Cardinal Schönborn puts it. He knows better, but then, he's always up to something.

Cardinal Christoph Schönborn at his Corpus Christi Sermon: From the "Disposition of the prayer lost to self" follows from a "inner Joy, the Joy of God himself, Who helps to bear all hardships."

Vienna (kath.net/PEW) Cardinal Christoph Schönborn recalled in his sermon at the Josef Square in the center district of Vienna the tradition [sic] of Josephism going back to the Emperor Joseph II. The "temptation of Josephism", said the Cardinal, is still with us today, namely, "to measure religion according to its social and communal usefulness". "And then we all play industriously along, in which we put all the importance of the Church for its usefulness to the State and Society."

For that reason this produced a "complete balance of success" -- the Cardinal identified, among other things, Catholic Schools, the distribution of Charity, the ecclesiastical cultural goods and the lobbying for development -- for which "we also show our thankfulness as a sign of esteem and the recognition of the side of the State, as approximately the most recently conclusive natural sign of the marketability of the Church's contribution" [which "isn't a privilege for the Church, rather the recognition of its contribution to the good of the whole"].

it is therefore a "great other: religion, faith, church as a society of faith, may not be understood according to its use. The burning heart of Religion is the purposeless mystery, and if it does not live any more from this secret, then its burning center is extinguished." The Eucharistic Adoration, therefore in the Monstrance which carries the Host, which according to the Catholic understanding is Christ himself actually present, says Cardinal Schönborn, "purposeless, but supremely meaningful". "The Mystery is adored that is present in this small piece of bread.... must have no balance of usefulness." "Finding God according to God's will! Jesus Christ is honored and adored in the form of his Eucharistic presence: That is the meaning of today's event", the "living kernel" of the Corpus Christi tradition.

"Freed from a self-justifying ritual"

Finally Cardinal Schönborn focused in his sermon at the Josefplatz, "not intended but all the more important side-effects" which "comport the purposelessness of giving adoration": First, "that we are released from this sometimes painful ritual of self-justification". Here the Cardinal recalled that many efforts of the Church for Society are actually numerous, and are gratefully recognized, "but we may not inform ourselves, that we, for that reason, are the only and the best." Even the secular society has "fantastic schools, good hospitals, fantastic social services -- without religious motivation."

"Free for Service to Neighbor"

Second, following on the "Demeanor of the selfless adoration" an "inner joy, which is the joy in God Himself, who helps bear all hardships. Finally to be free of the self-forgetful adoration of the mystery, free from one's self, free for God, free for the devoted service to neighbor." "Our duty" on Corpus Christi, "This purposeless procession, these moments of adoration bring the source to approachability, which flows from our society with new power", concluded Cardinal Schönborn his Sermon.

The Eucharist -- The Way For the Renewal of the World

Rome (kath.net/as) The Eucharist brings man to Jesus, who in the traces of Christ are capable, to give to one another, and to become a tool of the unity of the human family. This was said by Pope Benedict XVI in his sermon at the Holy Mass of Corpus Christi in the Papal Basilica and Bishops' Church of Rome, St. John Lateran. After the service there was a large crowd of people participating in the Pope's traditional Procession, which concluded with a Eucharistic blessing at the Basilica of St. Maria Maggiore.

In the Eucharist is the complete transformation of the fruits of the earth -- bread and wine -- with the goal, to transform the lives of men and in this way to begin to transform the world, says the Pope, who invited thereon, to think about the mystery of Christ, who through His self-donation on the Cross saved the world and showed the way of salvation.

Everything takes its beginning with the heart of Christ, who thanked and offered God at the Last Super and transformed the meaning of death with the power of his love. From love, Christ took the suffering to death on the Cross and transformed it with an act of giving. This transformation, which the world needs, there it saves it from within, opens it to the dimension of the Kingdom of Heaven. Actually God wants to make this renewal real in the same way for the world, to which Christ is come: "through the way, which Christ is".

For the same reason, God handed over to the world the gift of the Eucharist, to offer the possibility of salvation for every person: "In Christendom it is nothing magic. There are no short cuts", says Benedict XVI., "everything is accomplished by the pious and patient logic of Faith, by which the gentle power of God moves mountains."

For that reason, "God will proceed to renew humanity in history and the Cosmos freeing him from these chains, Whose Sacrament is the Eucharist. Through the consecrated bread and the consecrated wine, in which is body and blood are present, Christ transforms us, so that we are made like Him: he encloses us in his work of salvation and makes us capable through the Grace of the Holy Ghost, to correspond to his logic of the gift to live, as grains of wheat, which are joined to Him and in Him". In this manner these are sewn and ripened in the furrows of history in unity and peace, "which is the goal, to which we are striving after the plan of God."

In order to understand the dynamic of eucharistic Communion, Benedict XVI explained the absolute division from the "Confessions" (VII,10,18) of St. Augustine, as he reported a manner of vision, in which Jesus said to him: "I am the food of grown men, and you shall feed upon me. You will not change me, as the meal is to the body, rather you will be changed as you are transformed into Me."

In the Eucharistic Commuion "we are transformed by Christ Himself, in this manner our individuality is open, freed of its egoism and bound with the person of Christ." So the Eucharist opens man even for others and overcomes all separation.

Whoever recognizes Jesus in the Host, "perceives him also in the brother, who suffers, who hungers and thirsts, the alien, naked, sick and imprisoned; and so recognizes every man; he establishes a concrete way for all in one, who are in need". For that reason the gift of the life of Christ a special responsibility of Christian for the building of solidarity, rights, brotherly society: "especially in our time, in the globalization of a larger interdependence, with which Christendom must be concerned, that this unity can not exist without God, that is to say can not be built without true love."

The Gospel is always a goal toward the unity of the human family, "proceeding from the meaning for mutual responsibility, which we recognize in the limits of our bodies, the body of Christ, which we have learned in the Sacrament of the Altar and continue to learn that the common part, that love is the way of true justice." 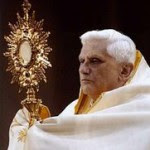