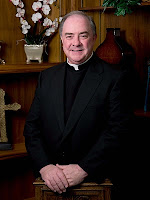 We were over whispering at the Loggia and people thought we were crazy, we were whispering to ourselves whispering these words like a curse, "the new ordinary of Corpus Christi is into Focolare?" But what Rocco won't tell you, because he can't tell you, is that there is a problematic aspect to the Focolare movement. Most of you who are self-described Traditionalists probably know that Focolare is a movement of masonic proportions rooted in the heretical Sillonist Movement condemned by Notre Charge Apostolique. But this site isn't just for you, we're trying to inform other people, we hope, things that we pick up that the ordinary person in the pew won't see and doesn't realize, actually teaches some things that are contradictory to what the Church teaches. Now before you go on accusing us of setting up a parallel magisterium of our own creation, take the time to find out what Focolare stands for. You don't have to be a fire breathing traditionalist to be upset about a cultic, pentecostal group like Focolare. I wouldn't want my children participating in it and you shouldn't either.


And don't be participating in ad hominem attacks, y'all.

Reference works dealing with the phenomenon of Focolare: