Edit: a reader posted this in the comments on the Robber Barron post and what he plans to do to Scripture. Many heretics before him have had their own translations of Holy Scripture featuring their own pet errors, like Wycliff, Luther, Scofield and all too many others. This is a good place for a Chy-NA post.  The Chinese government is planning its own official scripture translation at The Sun:

Although no specific books were mentioned, party officials called for a "comprehensive evaluation of the existing religious classics aiming at contents which do not conform to the progress of the times."

Reports say bible-bashing China wants all major religions to review their holy texts and to adapt them to the "era of President Xi Jinping".
China officially recognises all faiths but the country is known for its Big-Brother surveillance and policing worship is just one aspect of this.
Beijing highlights that "Jesus Christ's parables" will have to fall "in line with the Communist Party, failing which they run the risk of being purged from the bibles available to the faithful."

The Bible and Christianity are apparently not alone in being targeted, with the authorities setting their sights on all major religions, requiring a "sinicisation" of the Quran and the sutras found in Buddhism.
The authorities apparently want "a complete reevaluation of existing translations of religious classics".


Meanwhile, Chicoms have plants who have infiltrated the American University system, in Arkansas of all places.  Alex Jones covered the story:

An engineering professor at the University of Arkansas has been arrested by the FBI and faces up to 20 years in prison for allegedly hiding funding that he received from the communist Chinese government.

The New York Times reports that “Simon Ang of the University of Arkansas, was arrested on Friday and charged on Monday with wire fraud.”

“He worked for and received funding from Chinese companies and from the Thousand Talents program, which awards grants to scientists to encourage relationships with the Chinese government,” the report notes, adding that “he warned an associate to keep his affiliation with the program quiet.”

“Gesture of obedience": Archbishop Celli with legitimate bishops of China, who have to resign in favor of bishops who belong to the state.


(Beijing) Two legitimate bishops were called to resign yesterday on behalf of Pope Francis. They have to give way to Patriotic bishops loyal to China’s Communist regime.

Underground Bishop Vincent Guo Xijin was the Bishop of Mindong, officially recognized by Rome. He was rejected by the Communist government in Beijing. At the insistence of Rome, he will now resign to make room for a bishop in the diocese, whose excommunication was lifted by Pope Francis last September. The repeal was a one-sided advance of Rome for the signing of the secret agreement between the Holy See and the People's Republic of China on the same day. The content of the agreement is kept secret in agreement of both sides, but should relate to episcopal appointments.

Pope Francis abolished the excommunication of seven bishops whose episcopal ordination had been ordered by the communist government without the consent of Rome. Part of the agreement seems to be that not only the excommunication should be repealed, but all previously bishops of Rome as diocesan bishops must be used and recognized. In order to make this possible, the Vatican negotiators urged legitimate bishops in the fall of 2017 to renounce their offices. They must subordinate themselves in rank to the bishops who belong to the state and become their suffragan bishops.

Bishop Vincent Guo Xijin was also urged to do so. In the past two years alone, he was arrested twice and taken to an unknown location. A popular method in the People's Republic of China is to exert pressure, intimidate, or subject regime opponents to re-education.

His place as Diocesan Bishop of Mindong will be occupied by Vincent Zhan Silu. This became known yesterday after Bishop Guo gathered his priests in the afternoon to explain the situation to them.

Bishop Guo, who will be Auxiliary Bishop of Mindong in the future, had just returned from a place near Beijing. Curial Archbishop Claudio Maria Celli, the head of the Vatican delegation that had prepared the agreement and signed it on behalf of the Pope, had sent him there.

Archbishop Celli handed Bishop Guo a letter from Cardinal Secretary of State Pietro Parolin and Cardinal Fernando Filoni, Prefect of Propaganda Fide. In it they asked him to cede the leadership of the diocese to Zhan Silu. Archbishop Celli emphasized to the bishop that Pope Francis awaits his resignation as a "gesture of obedience". It is a "sacrifice for the overall situation of the Chinese Church,” which he has to bring into being.

The news, AsiaNews said, has "saddened" many priests and believers. Until now it was the case that an episcopal bishop, reconciled to Rome and recognized by the Holy See, subordinated himself to the Underground Bishop and became its Auxiliary Bishop. "Now the opposite is the case," says AsiaNews.

The question of who benefits from the agreement does not have to be asked. Cardinal Joseph Zen, emeritus bishop of Hong Kong and gray eminence of the Underground Church said in September. It is the government in Beijing.

Bishop Peter Zhuang Jianjian was also summoned to meet Archbishop Celli. He too will resign "as a papal wish" as Diocesan Bishop of Shantou. His place will be taken over by Bishop Joseph Huang Bingzhang.

The paths approved by Rome  are still a stumbling block for those affected. In order for the legitimate bishops, after their resignation, to become auxiliary bishops of their previous dioceses, they need the approval of the communist government and the bishops' council. They depend on those from whom they have so far been able to stay away from great sacrifices but successfully.

Even before signing, Cardinal Zen said that the Vatican would hand over the faithful underground church to the regime.

Diocese of Hong Kong: UN to demand religious freedom of Beijing - Four arrested underground priest 17th September 2013 10:07 | Note to editors (Hong Kong) Iustitia et Pax of the Diocese of Hong Kong, China appealed to the United Nations Commission, which periodically is concerned with the progress of religious freedom in the People's Republic of China. Iustitia et Pax called for the United Nations to urge Communist China to implement “religious liberty” in the letter of 18 July. The Diocese of Hong Kong gave the UN a number of new cases of serious violations of religious freedom. The specified include the illegal ordinations that the Beijing regime performs against the will of the Catholic Church. In the month of August alone, four underground Catholic priests were arrested. There is no information of where they are held or how they are doing. On the 2nd of September, a preparatory meeting of the UN Commission took place. A meeting is planned for the 22nd of October, in which the periodic report on religious freedom in China is to be presented and decided upon.

AMGD Link to katholisches...
Posted by Tancred at 10:39 PM No comments: 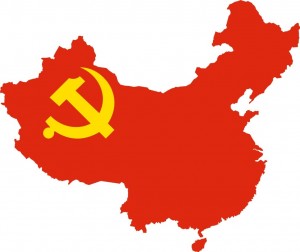 It reads in part: "With the rapid economic and social development of China and the solid growth of overall national strength [...] hostile foreign forces have intensified the exploitation of religion to infiltrate China and advance their political conspiracy, westernizing and dividing China" It continues: "Foreign forces in the universities have the key objective to infiltrate through religion, particularly of Christianity." Vatican Insider/Giuseppe Nardi Bild: Wikicommons
Posted by Tancred at 11:57 PM No comments: