"Rebel priest" Bernhard Kroll is Programme Director of Pastoral Workers of the Diocese of Eichstätt Kroll was rightly suspended because of prohibited participation in a Protestant communion with the "Ecumenical" Church Day in Berlin by Bishop Mixa. Now he is promised a management function.

Driven mainly by Protestants and Leftist "Catholics" as a hobby, "ecumenism" has as its primary purpose to enfeeble, and to pull down Roman Catholic values ​​and beliefs to Protestants level.

To date, it is certainly not known if Protestants are coming to the Catholic Church. The former cult director and current ambassador of the Reformation, Margot Käßmann, who drank her way out of her former office, expects a "positive signal for ecumenism", quite the opposite for the Luther celebration in 2017.

At the same time it is clear: "The divisive - Papacy, Marian devotion, theological understandings of the official Church and the Eucharist - will remain of course."

In other words: the Catholic Church is to move towards heresy after example of the Protestants.

In connection with the "Ecumenical" Church Day in May 2003, in Berlin, he cooperated in celebrating Eucharist with the later banned, Emeritus Theology Professor Gotthold Hasenhüttl, in the Gethsemane Lutheran Church and Fr. Bernhard Kroll, pastor in Franconia Großhabersdorf, had used members of the Protestant cult as lackeys.

Out of sheer greed for public acclaim, he was also filmed here.

Hw. Hasenhüttl described in an interview with the anti-Catholic polemic journal "The Mirror", the Papal encyclicals - like those of Pope John Paul II, with which it is clearly presented by the Holy Father that Catholics attending the Protestant type of the "Eucharist" is forbidden - as a "contribution to the discussion by the Pope".

Fr. Kroll continued the compare the celebration of Holy Communion in the Church of the presence of God as the same as a mere memorial by Protestants.

Fr. Kroll knows that the participation of a Catholic priest in vestments in a Protestant wine tasting with bread is forbidden.

But that did not bother him.

On the contrary, he had even accepted the action taken, even expected sanctions by the Church - "but at most with a warning, or a leave of absence."

Instead, the then Bishop Walter Mixa had done the right thing: He suspended Fr. Kroll a few days later, prohibiting any celebration of the Eucharist and relieved him of his duties as President of the Diocesan Catholic Youth Community (KJG). The official website of the Diocese of Eichstätt euphemistically describes it ten years later (release: July 8, 2013) with, "In the fall of 2003, he resigned [Fr. Kroll, Editor's note] his pastorate and began further studies."

Then the supposedly Catholic associations of de facto Protestants as "We Are Church" attempted to stage a peasant revolt. In a leaflet of the anti-Roman "Church People's Movement" ("We Are Church") you availed the mobilization effect and asked the recipients "for their generous (tax-deductible) donation - of course for themselves.

Bishop Mixa was fortunately committed in his objectively well-founded decision.

But he also receives unintentional praise from "We are Church": "Walter Mixa, Bishop of Eichstätt, for whom the Pope is a welcome guest, who had already made known his unwavering loyalty to the Roman doctrine on the assumption of office."

Support was received for Mixa from his Excellency Meisner, Archbishop of Cologne and Catholic associations like the "Network Catholic Priests": "Kroll is a further indication of the theological and pastoral nadir of German Catholicism."

However, the network of Catholic priests wished even a punishment of unfair practices in the Eucharist even when they are not attacked in the media.

He had been shocked, is what Fr. Kroll reported. Apparently not enough, at a press conference given after his disciplining he shows himself obstinate and refers to previous misdeeds, "church services, weddings and baptisms along with evangelical colleagues are common in my community. The time was ripe to go a step further. I would probably not do it again in this way."

Almost exactly ten years later the incumbent Bishop of Eichstätt Hanke promoted Fr. Kroll, to the order to the diocesan president of the Catholic Workers Movement (KAB). He replaces vicar Michael Konecny, who is now translated to the parish of Buxheim.

Even before that (early 2008) had his Excellency had appointed Kroll as city youth minister in Ingolstadt - how aptly he could convey his Protestant views of equality to the youth right here.

The new office is to begin for "rebel priest" on the 1st of September, 2013, coinciding with the disobedience Pastor Strohmaier in St. Veit am Vogau in southern Styria.

But that the episcopate also conveys that it is behind the anti-Rome movement or at least approves of this.


Editor: Bishop Walter Mixa was one of the few German Bishops trying to get it right, and he was trammeled and dismissed over very weak allegations of physically abusing his students.  He was "helped" along by the decadent Cardinals Marx and Zollitsch.  Clearly, he was replaced by a very evil Bishop.
Posted by Tancred at 11:59 AM No comments:

The UK Newspaper joins attacks on Bishop Mixa of Augsburg. Although the news story contains no new information, it claims that there is a new round of accusations against him while he waits at his mansion for the decision on his resignation.

What is becoming increasingly clear is that Archbishop Zollitsch and Bishop Marx have stepped out of their way to feed him to the wolves. One thing this story is really showing up is how things are shaping up in the Church as Liberal Prelates become increasingly aggressive against Catholic Prelates, using the press corp as an effective bludgeon to destroy the credibility of the Church and the ongoing reform.

Meanwhile, the Vatican has agreed to cooperate with Italian authorities regarding the charges of corruption against one of its Cardinals. Sounds like this was the reason behind the Carabineri (Italian Federal Police) evesdropping "accidentally" on the Pope's phone conversations as reported earlier this Month. Speaking of scandal, wasn't it Damian Thompson who said the other day that we needed an outside to clean up the Italian dominated curia? The cleanup may well go on without the Australian Cardinal Pell who was said by various sources last week to have been bypassed for promotion to the powerful Congregation of Bishops owing to a smear campaign against him. 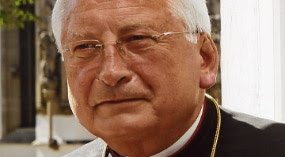