No Christmas in Bethlehem? The Christians Rebel

(Jersualem) The Palestinian Authority has asked all of the West Bank to cancel all public Christmas festivities. There is nothing to celebrate, it is said, referring to the continuing violence in October between Palestinians and Israelis, which has already claimed 147 deaths.

Palestinian Authority and Tanzim militia: "There's nothing to celebrate"

HERE YOU CAN ADVERTISE »
Bethlehem also had to bow to political pressure - at least partially. "That right  in Bethlehem, the town where Jesus was born, Christmas must only celebrated quietly, is a sad absurdity," said the Catholic weekly magazine Tempi.
The Tanzim militia, the armed wing of Fatah, called for by the municipality of Bethlehem, that erected in the square in front of the Nativity this year no Christmas tree and no crib, no Christmas lights set up in the square and in the streets, no Christmas concerts and also  the traditional fireworks will not be set off. The Tanzim militia was established in 1995 by Yasser Arafat as a counterweight to the propagating among Palestinian Muslims Islamism of Hamas. It bases its claim on the new Intifada. As long as Israeli soldiers, police and special forces kill Palestinians, "there is nothing to celebrate."
Bethlehem had a Christian majority until a few decades ago. Through the establishment of the State of Israel and the Jewish-Palestinian conflict there was a different demographic development, the Christians are now in the minority. Due to an internal Palestinian agreement between Muslims and Christians, Bethlehem has nevertheless in Vera Baboun a Christian mayor. It is thanks to Baboun's stubborn resistance that despite the conditions in Bethlehem   Christmas will be celebrated publicly in 2015.
The fireworks and the Christmas concert of the tenor Andrea Bocelli were cancelled. The Christmas lights will be only reduced. Only the two main streets are illuminated. But Baboun made the Chistmas trees on 5 December visible for miles around  (see picture)  and made the manger big. The traditional procession from Jerusalem to Bethlehem will take place on 24 December.
The procession is as usual to be led by the Latin Patriarch of Jerusalem, Fouad Twal, led and crosses on the wall  built by the Israelis. The Christmas procession connects the two cities, which lie within sight and played a central role in the life of Jesus. "The birth of Jesus took place already facing Jerusalem, where he suffered death, but is risen. The two cities are inextricably linked," says Jamal Khader, the rector of the Latin Patriarchate in Bethlehem.

"It is impossible for Christians to Cancel Christmas"

"We are in a critical situation," said Mayor Baboun to the press. "But it is impossible for a Christian to cancel Christmas. And it is   mandatory for Bethlehem to celebrate Christmas. "Even Jamal Khader, Palestinian Christian and known peace activist, stressed that it was "unthinkable" not to celebrate Christmas. However,  Khader showed understanding that it should happen this year publicly if being somewhat subdued. "We can not hide what is happening currently. Here you are going to lose the hope of a future of peace."
Mayor Vera Baboun fights tenaciously for Christmas, but because of the majority this has its limits.  Ekram Juha, her office manager, took the sentiment towards the Washington Post to the point: "I am disappointed. I can understand if you restrict the festivities somewhere, but not here in Bethlehem. If one restricts Christmas here, where Jesus was born, it has a spiritual dimension. It relates to the sacred. Apart from this we have lived for many years under difficult conditions, yet the festivities have always taken place."

A "miracle" that Christians endure in Bethlehem

The latest "miracle of Bethlehem," said La Repubblica, it is that Christians remain in Bethlehem, persevere in the birthplace of Christ, even though they have been harassed, threatened and attacked by gangs of young Muslims. And that yet they celebrate Christmas in defiance of orders."
When Bethlehem was partitioned in 1948,  when the UN authority proclaimed the State of Israel,  its population was made up of  85 percent of Christians. The Muslim share was 12 percent. The birthplace of Jesus through all the centuries had been a sheltered place for Christians. Because of the political situation and the economic problems, Christians migrate and Muslims have more children. 20 years later, 1967, the majority was overturned.Today Christians are  only 12 percent in the city. The Christians fear to be displaced entirely in 20 years from Bethlehem. A "land Mafia"  is using tried  criminal methods, violence and official networking to drive the Christians from their land. Since the 90s, also takes place Islamization of Palestinian Muslims.
Text: Giuseppe Nardi
Photo: Tempi
Trans: Tancred vekron99@hotmail.com
Link to Katholisches....
AMDG

(Bethlehem) An arson attack was committed against the Maronite Monastery of St. Scharbel in Bethlehem last weekend."These are targeted arson attacks. The attack includes sectarian graffiti and is the work of a group or of individual perpetrators of radical Islam," said Sobhy Makhoul, the Chancellor of the Maronite Patriarchate of Jerusalem to AsiaNews.
No one was harmed in the arson attack, because the monastery is currently uninhabited for comprehensive renovations. However, the damage is great. Other forms of anti-Christian violence are especially feared by the Christian community of Bethlehem, which is experiencing a progressive Islamization of the city.
The perpetrators "broke into a room of the convent, which was filled with furniture," said the Maronite Chancellor. "They seem to have set there the fire that quickly spread throughout the convent."

According to the investigating police, perpetrators could be extremist Muslim groups that are active in the area. According to unconfirmed information, the perpetrators had already been identified and would "soon be arrested."
"The handwriting is clearly religious. It is the apparent attempt to strike at Christians. The Middle East is unfortunately full of such incidents. In the area there are extremist cells of Hamas and loner who let their ideology run wild," says Chancellor Sobhy Makhoul.
The monastery of the Saint Scharbel of the Maronites united with Rome is located in Wadi Maali, a suburb of Bethlehem, which is predominantly inhabited by Muslims. The fire broke out in the basement and then seized the entire monastery and the monastery church.
"Last month, the Palestinian Authority had provided $100,000 for the renovation of the monastery. It was a gesture of appreciation to the Patriarch and a sign of willingness to participate in the renovation of the monastery," said the Chancellor of the Maronite Patriarchate.

The incident had frightened the Christian community, "but we must look forward," said the Chancellor. "We are part of this country. We have to live with moments of tension."  The Palestinian Authority "must ensure justice and arrest the perpetrators, as the Israeli authorities need to do regarding the arson attack on the Church of the Multiplication in Tabgha. Any form of extremism, whether of Jews or Muslims must stop," said Chancellor Makhoul.
"We, as a Church, condemn these acts of violence. It takes a great effort to change the sermons in some mosques, where people are incited to hatred. This  preaching of hatred,  fuels this hatred and concludes in this violence against the Christians!",  explains the Maronite Church representative.

Saint Charbel Makhluf (1828-1898) was a Maronite monk in Lebanon. At the age of 23 years entered the convent of Our Lady of Mayfouk. In 1859 he received the sacrament of Holy Orders. In 1875 he retired to a hermit's life in the Peter and Paul hermitage in Annaya, where he died on Christmas Eve in 1898.
His body is incorrupt and still contains bodily fluid such as multiple reburials confirmed. During his lifetime he was revered as a saint and miracles had been  wrought  through his intercession. Since his death are those have been confirmed. In 1965 Charbel Makhluf was beatified by Pope Paul VI., and his canonization followed in 1977.
Text: Asianews / Giuseppe Nardi
Image: Asianews
Trans: Tancred vekronn99@hotmail.com
Link to Katholisches...
AMDG
Posted by Tancred at 9:56 PM 6 comments:

Edit: How many Palestinian refugees could live in Abbas' palace? 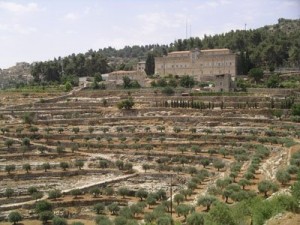 (Bethlehem)  On February 8th Abuna Mario Carnioli, Catholic priest of Beit Jala in the valley of Cremisan near Bethlehem will celebrate Holy Mass in the olive grove, "to cry out to heaven", as Fides reports, "that the time is, to let this land return to righteousness, because justice will bring security and peace",  says Abuna Mario in his appeal.  The valley lays near Beit Jala west of the Church of the Nativity in Bethlehem.

Since October 2011, the priest has prayed and celebrated Holy Mass and the Stations of the Cross as well as the Rosary in the olive grove of Tales.  Today the Mass intention is special.  In the coming weeks the Court of Appeals of Tel Aviv will decide over the recourse, which the owners of the property of Tales have brought against the Israeli wall construction.  An appeal was also made by the Salesians, who have had a cloister in Tall since 1885.  In addition to an expanding wine growing business, the cloister has, above all, a home for orphans and children from needy families and several schools, among them a vocational school teaching many different jobs and not least, a theological seminary with students from the whole world.  Since 1996 it hasn't just accepted Christians, but children and students of all religions.  With the start of the second Intifada and the Israeli sealing of the occupied areas almost all of the projects of the Salesians were choked off.  Since Israel has pursued the wall, Bethlehem has been completely threatened with being shut off completely from the outside world.

"Unite yourselves in prayer, so that the Lord will enlighten the Israeli judges", wrote Fr. Carnioli in his appeal. For the priest can only imagine that  "a sick mind have developed this wall of shame of the division," because "it does not bring security, but only robs our families, the country and stifles our community whose lives are made impossible." The wall also destroys "one of the most scenic areas of the Holy Land," said Mario Abuna. Because of the Israeli construction of the wall more than 50 Christian families living in the valley have to be expropriated. The Salesian monastery of Cremisan has given these families a secure existence for more than 125 years, with its vineyards and olive trees. "Now they risk losing everything," said the priest.