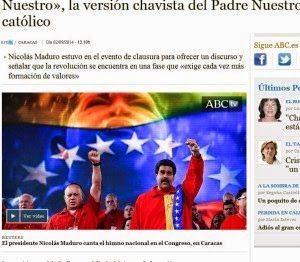 President Maduro took the "revolutionary" step so that the "Revolution is in a phase that requires to reinforce the value of education... The Venezuelans should be fortified for  daily street fighting for the values ​​of the revolutionary leader Hugo Chavez," said Maduro in his address at the end of the event.
Hugo Chavez had a very difficult  relationship with the Catholic Church and also did not hesitate to let his followers storm the Archbishop's Palace in Caracas. His affiliation with the Catholic Church was still clear. The religion of his successor Maduro however is unclear. The son of a Jewish-born father and a Catholic mother was, as the President himself declared, "socialist educated." Maduro himself  has made anti-Catholic as well as anti-Semitic statements and is a supporter of the  Indian guru Sathya Sai Baba, who is deceased since 2011.
The video shows the party meeting at which the "prayer of the Chavista delegates" was first presented.
Posted by Tancred at 11:31 AM No comments: 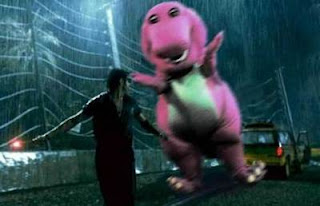 Edit: Seems to us that Subcaths can’t help themselves. We’ve already determined that they can’t be Vatican II, really, because they’re against free speech, and really despise Catholics who are exercising their rights as adults to have an opinion. They have to use their paid positions of authority to shout down people who have true and legitimate concerns about what’s happening within the Church and hierarchy.

These anti-Catholic bigots have launched an attack on Catholics in recent days by misrepresenting them, accusing them of committing crimes punishable in highly advanced and profoundly moral countries like Germany, France, Denmark and Holland. Let’s say never again, and speak out whenever you see a friend exhibiting this hateful bigotry and call them out on their anti-Catholic bigotry. When they’re not busy ignoring the wholesale and unavanged slaughter of Catholics worldwide in places like Indonesia and Nigeria, they’re attempting to pull a diversionary maneuver on concerned Catholics by slandering them.

On a slightly more serious note, in the last few days there has been a mounting campaign of character assassination by the approved bloggers of the National Catholic Register, book end to the National Catholic Reporter, being launched against certain persons because of a report against Marcelo González, an Argentine Catholic who’d made a report, later confirmed and apologized about by Father Ray Blake and the hermeneutic of continuity blog , on traditional blog Rorate Caeli.

Apologies are not forthcoming from other bloggers, however, who have not only refused to apologize, but have piled on further accusations as well against Mr. González in particular, and Traditionalists in general. Initially, a woman named Dawn Eden (Goldstein), is maintaining the familiar libel against Traditionalists and politically unprogressive individuals in general, as “Holocaust Deniers”. Not only did she cast some unfair accusations about Rorate’s coverage of the issue, and mistakenly associated them with the SSPX, but hadn’t even read the original document she’d used to accuse Mr. Gonzalez of being evil in its original language, since she doesn’t speak Spanish and read a google translation instead.

Furthermore, a hysterical Simcha Fisher utters a demand that there ought to be some kind of public outcry against the evils of anti-Semitism. We’ve noted in the past here on this blog that it’s difficult, if impossible, in great part because official mouthpieces don’t help much, that violations of Catholic doctrine, liturgical rubrics, veritable insults against Christ Himself, go unpunished and unanswered by those in positions of authority time and time again, while faithful priests are punished in turn, sometimes at the urging of people like NCR and Patheos bloggers. We expect that even if there is an official concern about unfounded charges of anti-Semitism by Neoconservative journalists, we’re not sure how they would enforce a principle which isn’t part of the deposit of faith or if a canonical proceeding could handle such a thing. In any event, many real violations of doctrine take place virtually every day and go unpunished, so we can’t imagine how this charge of anti-semitism could be enforced even if it were the problem the often emotive Simcha Fisher insists it is. .

If you wish to complain about the rude and frankly, libelous behavior of bloggers in various states of employment with the Catholic Church, we’d invite you to contact EWTN and National Catholic Register to lodge your complaints. (800) 421-3230.

Edit:  J.Z. Knight is a local cult leader in Yelm, Washington.   She's been accused of saying derogatory things about Jews, Catholics and homosexuals, and they are derogatory and even recommend violence.

She is also one of the largest contributors to the campaign of an Extreme-Leftist Green Sandra Romero who is the County Commissioner for District 2.  Incredibly, Knight insists that here comments were being taken out of context, but it seems the entire context had to do with "destroying Catholic Church down".  She's the largest contributor to the campaign of Sandra Romero.  Romero has no intentions of returning the contributions at this time although the State Republican Spokesman, Kirby Wilbur has requested they do.

It will be interesting to see how this pans out, but don't expect a lot of consistency or integrity from these radical elites.

Does this sound like Madame Blavatsky to you?  Or perhaps Jim Jones?

Here she is attacking the Catholic Church by calling for violence against it. Of course, she claims to be "in touch with the LGBT community".    She doesn't spare Jews either.  It sounds like she maligns everyone.  The video contains graphic language.

Posted by Tancred at 9:48 AM No comments: