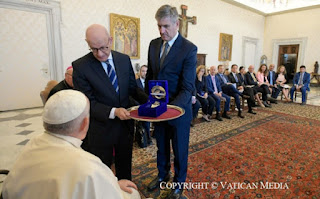 Bergoglio receives award from the B'nai B'rith
Edit: this is from TIA.  I haven't seen this anywhere else in Catholic media, and until more Catholic organizations comment unfavorably on these kinds of events, nothing is going to change for the better.
In the photo above, we see the CEO of B'nai B'rith International Daniel S. Mariaschin giving Pope Bergoglio a gold chalice with Jewish inscriptions and symbols. This was a symbolic award to thank Francis for his constant support for this Jewish Masonic organization. This took place during a meeting in the Papal Library when Francis received a delegation of 27 members of that organization on May 30, 2022.
Commenting on the encounter, Mariachin told the Jerusalem Post: “From his years as Cardinal in Buenos Aires until today, Pope Francis has expressed a special interest in furthering Jewish-Catholic relations." He continued, “Our audience with him gave us an opportunity to demonstrate our appreciation for this support, to confirm our shared aspirations for peace and mutual respect."
In a formal speech, the president of the Jewish organization Seth Riklin asked for papal support for the Abraham Accords, which is a Jewish initiative to make Arabs recognize the State of Israel. This was an implicit request for the Holy See to exercise its influence over the Middle East Arab countries to accept Israel. This is what B'nai B'rith calls its work for fraternity and peace.
AMDG
Posted by Tancred at 7:28 PM

How can this happen when the Church has always been implacably against the Masonic ethos? Are we seeing our Pope finally breaking all Catholic history by this action in receiving such a gift?

It cannot happen in the Church - that is the point! - for what we are witnessing is not The Vicar of Christ rubbing elbows with Jews.

Indeed. Bergoglio is an antipope

Indeed: Bergoglio is a Jew.

Bergoglio is mind-numbingly indicative of a Marrano.

Bergoglio is the Vicar of the Khazars.

Saint JP II, that son of a Jew.

The Saint who worships Demons at Assisi 1986.
-Anthony

The Khazar thesis is a fake origin story concocted by Arthur Koestler, who was also responsible for publishing and. popularizing. Solzhenitsyn . It kind of makes you go HMMM.