Has Cardinal Schönborn Left the Catholic Church in Pectore Already

In an interview with "Die Presse" journalist Nowak Cardinal Schönborn has replaced the cross by a seven-branched candle holder of the Jewish B'nai B'rith lodge. 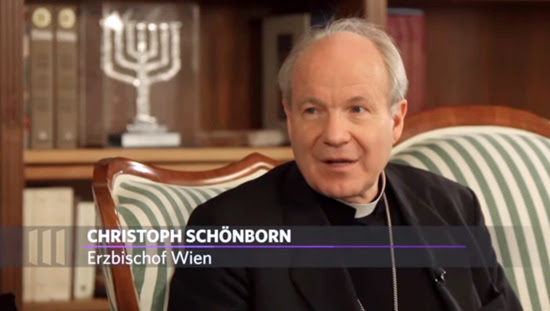 Has the Archbishop of Vienna, Schoenborn "caught" the false confession?

The Catholic Church has a strong sense of the setting of symbols, gestures and actions. In the Holy Mass, they stand pars pro toto , hints describe the whole, the unspoken. In particular, in the liturgy before its denaturing by the evil spirit of Vatican II, the individual acts and gestures have been thought important.
Not coincidentally  "simple" clerics (and certainly bishops and cardinals) attend the cross that is just perceptible in the public pictures of them, which is seen as a guide in the best sense of the word.

Not so with Cardinal Schönborn: In a conversation with the editor of the Viennese daily "Die Presse" of 25 March 2014 for the ORF   “someone” had chosen as an image background something other than the expected cross, but a sparkling seven-branched candle holder.
The number seven, however, does not point out that it is seven spirits before the throne of God (Rev 1,4), rather it is here referring to the seven-branched candlestick, which the Archbishop, himself the son of a Freemason, received  as a "special appreciation" from the Jewish Loge B’nai Brith   in late October 2013.
“As luck would have it" Cardinal Schönborn wanted to curry favor even when "Press" editor in chief Nowak, who refused military service and had done instead performed civil service at the extreme left-wing "Documentation Archive of the Austrian Resistance”.  He's likely me much less brave representatives of the Church.

The partisanship for Jewish interests is also evident in his essay "Judaism and Christianity" in "The Jewish Echo", Vol 46, pp. 15 ff here represents Cardinal Schönborn the right positivist view that it was "undeniable" that Christ has "by the applicable laws deserved the death penalty ... [for blasphemy] ."
Eminence, have your interpretation by then - in an analog to legal positivist thinking - maybe  the Jews had "earned"  the legal consequences of legal validity as subsisting in Nuremberg Race Laws  or here is perhaps  a logical fallacy on your part?

"Excessively" Evil Christians and the “Terrible" Question of Who is Christ

Cardinal Schönborn mentioned in this article, there was indeed a persecution of Christians by Jews, only they were "rewarded in abundance" by the Christians:
"The more it broke [the question of who Jesus was] from the outside in, booming, full of terror, spreading fear  and often death. In the memoirs of the rabbi's son David Tulman I read,” writes Cardinal Schönborn, that for his own - and for how many Jews over how many generations! - Good Friday was a terrible day. To him it came with pogroms, they were the 'murderers of God', who were the 'perfidious' Jews who crucified Jesus, who were persecuted by the riotous Christians."

Hands-on anti-Catholicism: "perfidious" instead of "faithless"?

The Archbishop of Vienna, used here not by chance the name, 'perfide Juden', mixing Latin with German and gives here the pejorative smell of perfidy to the  traditional Good Friday prayers for the conversion of the "perfidious Jews" ("Oremus et pro perfidis Judaeis") that just means something completely different than infidelity.

Weird - No Blessing by Christianity?

“It is not infrequently encountered  by Christians on the seriously flawed statement that Jesus proclaimed a loving Father God instead of the Old Testament God of wrath - a sign of how deeply the anti-Jewish furrows are dug in Christian soil,”  Cardinal Schönborn would have gone further.
The Archbishop of Vienna "dared" "the statement ..., Christianity is reminded by Judaism of its  order to be a bearer of blessings  for all peoples," and ". Anti-Judaism is therefore infidelity to God."
Only one must ask why the theocracy of Israel locks out  parts of the Muslim population on Jewish high holidays by the "blessing" of access restrictions.

Is Cardinal Schönborn an Apron Chaser?

Archbishop of Vienna, the son of a deserter and Freemason stands is in demand at the Jewish B'nai B'rith Lodge.

The "Red Cardinal" König and the Soviet Bigwig

But Cardinal Schönborn is not the first Archbishop of Vienna, who has been close to Republican Lodges.

For example, there is Cardinal König, who had opened wide the flood gates to socialist influence on the Catholic Church in Austria, is said to have belonged to Freemasonry.

That gave him the name "Red Cardinal".

The statement in Professor DDr. Robert Prantners memoirs "Between Ballhausplatz and the Vatican" remains unchallenged to this day, stated on page 174: "On the grave of the open bier Cardinal König lay at his feet one, honorific apron the Fremasonic Fraternal chain'." Some would want to see this as confirmation of these rumors.

Schönborn and the Lodge

The current Archbishop of Vienna, is the son of Hugo Damian Schonborn, an army deserter and Freemason. However, the paternal influence is estimated to be rather low, since he had left his family in the lurch at an early time.

Now Cardinal Christoph Schönborn has been included among the "friends" of the Jewish B'nai B'rith lodge brothers.

Allegedly this is because of his commitment to ensure that the Jews may continue to circumcise their male children without their consent, while that of African tribesmen of girls has been banned as mutilation.