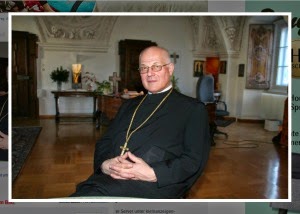 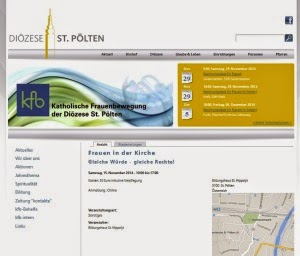 The study meeting called in the final resolution for an  "end discrimination against women" through and in the Church. Those present agreed that the exclusion of women from the priesthood is an "impermissible discrimination" is the true remedy it. Finally, women have "effected and inspired" the Church, which is why their exclusion from ordained ministries is untenable.
The resolution reads: "The exclusion of women from the priesthood is a discrimination that can not blame  Jesus for the argument that he  didn't grant them authority. Already, due to the natural divine law, no discrimination is inadmissible; to turn it off, it does not require any special authority. "
The "Fall Conference" demonstratively ended with a "celebration of the Word of God, which was headed by women". The venue was the formation house St. Hyppolit in the diocese of St. Pölten.
Of the said diocese and the competent diocesan Bishop Klaus Küng (Opus Dei) there has been no opinion on the meeting, the resolution and the appearance of Abbot President Haidinger. On the website of the Diocese the meeting was about the Catholic Women's Movement advertised in the official calendar of events. The Diocese of St. Pölten was headed, until 2004 by the late, militant Bishop Kurt Krenn, who braced himself against heretical positions and was brutally put down by the same circles.
Text: Giuseppe Nardi
image: My district / Hilda Schwameis (Screenshot)
Trans: Tancred vekron99@hotmail.com
Link to Katholisches...
AMDG
Posted by Tancred at 11:15 PM

So the majority of "theologians" are heretics. What else is new? If these heretics want women priests so much (why??), they are free to make the lightspeed jump to the Anglican Communion. And how well has that worked out there? The thing now again is that such heretics now feel freer to publicly speak against the Church with greater impunity than ever. And some of these sorry men get rewarded; some are appointed to positions near the present pope even...

If he said women should have babies, be submissive to their husbands and cover their heads like the Good Book says, Francis would remove him from office. Perverse Pharisees that love money, the best seats in the synagogue and to be in charge. God sits up in His heaven and laughs while planning their destruction.

Obviously,, this guy is a pure Protestant. He needs to move out of the Abbey immediately, if not sooner, and go elsewhere. Pope Francis better not try and change anything of The One Holy Catholic Apostolic Church; the nonnegotiables. The Doctrine that Jesus Christ Himself put in place.

I wonder if this is all a good thing. Let the wolves come out into the open for all to see. And when the present pontiff kicks the bucket, and perhaps we get a pope who will actually defend the faith and the faithful against such pernicious men, disciplining them and removing them from office, they will be very easy to identify. One can always hope....

Lots of anglicans joined the Catholic church after the ordination of women.If he's not happy with the male priesthood ,let him start up his own DIY religion.