Nuncio Intervenes Against Mass-Farce in the Archdiocese of Vienna 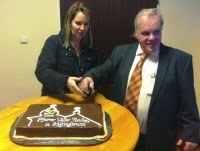 (Vienna) Because the competent Archbishop Christoph Cardinal Schönborn does not provide for order in his diocese, the Apostolic Nuncio, Archbishop Peter Stephan Zurbriggen has intervened. The reason is a  Mass scandal in the Archdiocese of Vienna. In Lower Austrian Kottingbrunn, a liturgical  farce was posted on Sunday, June 2, 2013 which simulated  holy Mass.
With the consent of the absent pastor Walter Reichel,  a man and a woman simulated Holy Mass in liturgical vestments. The woman said even the Eucharistic Prayer. For one of the  faithful it was too colorful at  least at this point. He protested loudly in the church against the scandal and left the farce mass.  However, his outburst at the affair was of no avail. Archbishop Cardinal Schönborn acted as "ostrich" (Ariel Levi di Gualdo, see separate report Church is not Groaning Under Too Much but Too Little Authority - The Case of Martha Heizer, will be translated shortly.) and has remained inactive. Finally, the apostolic nunio has now intervened in Austria, Archbishop Zurbriggen has demanded that Cardinal Schönborn   take the necessary measures to stop the outrageous spectacle.
As it turned out, it is located in the almost 40 kilometers from Vienna Kottingbrunn where it is “customary" that laymen recite the Gospel and preach. The Mass scandal is justified alternately by the "shortage of priests" and the “appreciation of the laity."

Pastor Belongs to the “Disobedient" Priests

Pastor Walter Reichel is one of the signatories of the "Call to Disobedience" the priest rebels of the former Vienna Vicar General Helmut Schüller. Reichel was appointed in 1982 by Cardinal Franz König as pastor of Kottingbrunn, and who takes his rebellion seriously. In any “liturgy" he prays for an intercession of  "church reform.”  As to what that means, you may ask the Pastor’s Initiative.
After the excommunication of Martha Heizer, the chairman of the radically progressive club "We are the Church," with her ​​husband at home in the living room (Diocese of Innsbruck) celebrated a farce mass, so another scandal mass was made performed in Kottingbrunn. It is a signal that the bishops of Austria have lost partial control over their priests, and their visitation requirement is not yet fulfilled. When the Nuncio Archbishop demanded an explanation of Schönborn for the scandalous incident, he also had to admit that what had taken place  in Kottingbrunn  was an "unauthorized and misleading liturgy of the Word," although he found it difficult himself in the naming of the scandal. So wrote the cardinal, in which "worship” was spoken  in a "very misleading way, a kind of canon."

After the Heizer Case and Kottingbrunn: How Many Evils are There Diocese?

The simulation of a mass entails an automatic excommunication according to how case Heizer was revealed.
Above all,  to be cheated out of the graces of the Holy Mass and receiving Communion, because it is only a simulation, which is completely worthless in the substance, a farce mass for the faithful.
Pastor Reichel was finally quoted at the insistence of the Nuncio by Cardinal Schönborn in Vienna. As usual for Progressives he reveals nothing. It minimizes and insists that there had been a "Liturgy of the Word with Communion Celebration…  There were unequivocally  no spoken words of consecration,”  said  daily newspaper Die Presse, citing him .

Fraud with Mass Simulation - Failure of the Bishops

The fact that the liturgy of the word or “worship services” are a scam, is suppressed by the bishops.  It awakens  the impression equivalence in the minds of the faithful with a Holy Mass. This starts with the choice of words. In some parishes nothing  more than  “worship" is mentioned, so any difference between the Eucharist and Liturgy of the Word is equivocated. Outright fraud prevails when Mass offerings in memory of the deceased during “liturgies of the word" or “services" are accepted, as is detectable in the parishes as  practiced. The various stages of the simulation result in the pretense of grace flowing and cause confusion among the faithful. That in the case of Kottingbrunn the apostolic nuncio had to intervene to ensure that something is stirred which casts a revealing light on the state of the Austrian episcopate.
Text: Giuseppe Neared
image: Kottingbrunn
Trans: Tancred vekron99@hotamail.com

Things must be pretty desperate when the nuncio abandons the usual internal lines of communication and resorts to public harangues to get the competent authority to do his basic job.

Pretty embarrassing for the cardinal, I would imagine. Unless Schonborn simply doesn't give a monkey's about his job, his superiors or being made to look a fool.