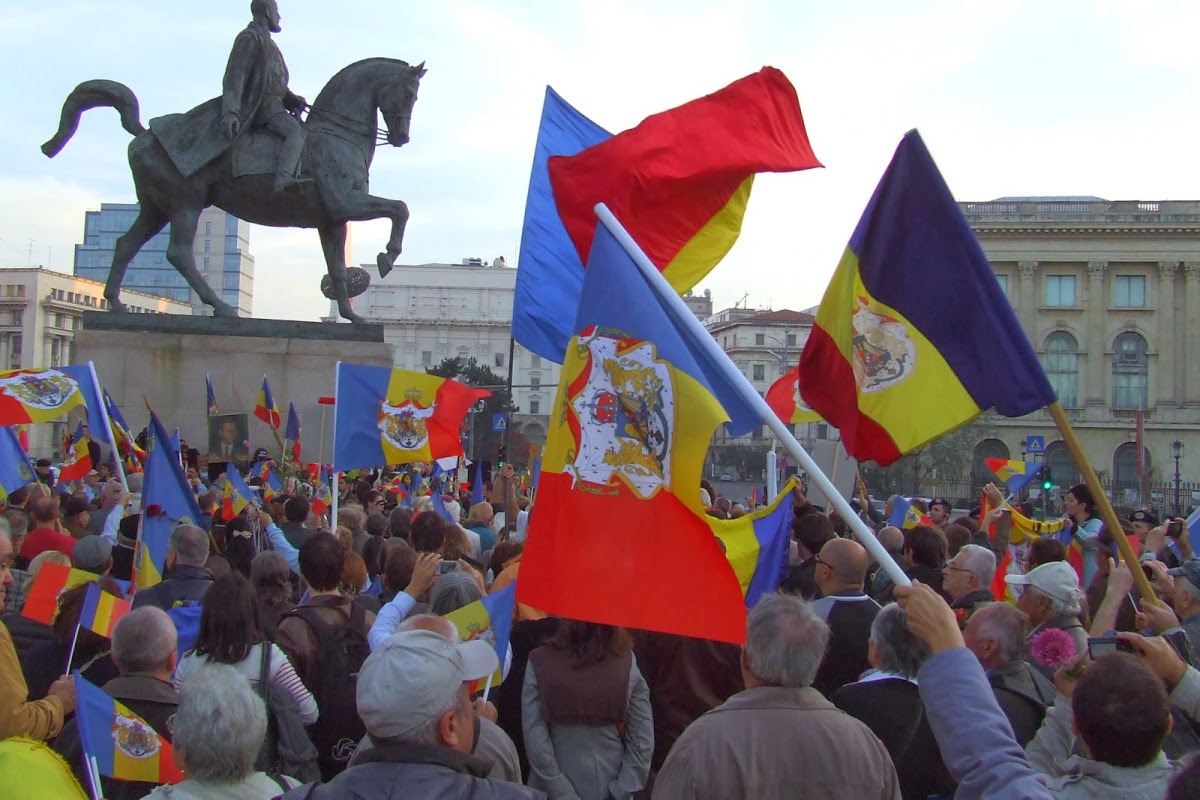 Romanians are being called  Via the Internet to go on the road and call emphatically for the restoration of the monarchy:


On Saturday, 5th April 2014 4:30 pm  Romanians, regardless of their political beliefs again will gather with monarchic flags and portraits of members of the royal family to march for a KING in several cities across the country!
The march is organized by  the National Alliance for the Restoration of the Monarchy (ANRM). This will be the second march of the alliance, after the first of 10 November 2013 ( Corona reported in issue 122 ).
Applications on the Facebook page Marsul Regal - Monarhia pentru Viitor .

Poster for the big demonstration in April
The protesters will march through the streets with three demands for the government and Parliament:
- Re-acquisition of the right to choose  the form of government - monarchy or republic
- Restore the monarchical flag of the country  (ie, the true flag of Romania, as it existed before the Soviet invasion of 1944)
- Celebration of the 10th of May of independence and sovereignty as a national holiday (as it was until 1947)

I hope they get a groundswell of popular support for the restoration of the monarchy....hopefully in the tens and maybe hundreds of thousands marching for the restoration.
There are several countries which I wish would restore their monarchies...and have a possible chance besides Romania. They are Bulgaria and Portugal. It is amazing when you think of it of the caos, decadence, corruption and immorality, not to mention political instability and economic collapse that has afflicted most countries of Europe that have adopted a republican form of government such here in the USA.
Italy has had over 50 governments since 1945, and many government collapses. Greece has had constant economic and political difficulties since overthrowing the king. Other countries, taken over by the Soviet Union after WWII, originally had monarchies but have had nothing but economic and political trouble and have declined into almost Third World status since.
I wish Romanians well is restoring their monarchy. I hope there is a huge turnout of support for its return.....enough to shock the present rulers to realize that it probably will happen.

Long Time The King Michael I of Romanie!

My grand-parents and parents have been full of admiration for the Royal House. My support ended very abruptely after being informed this monarchy agrees with contraception. After this information I suddenly realized none of the members ever protested against the abortion holocaust of Romania. Not that I know! So from my absolute pro-life point of view I am not happy with this Royal House. If they will change their attitude, than I'll change mine to. Miracles happen!

What an absurd and ridiculous response. I am sure the royal house will do very well without you.