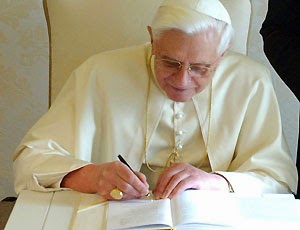 (Rome) Emeritus Pope Benedict XVI wrote an extensive critical commentary on the controversial interview of Pope Francis in the Jesuit magazine Civiltà Cattolic a 19 September 2013.
This was disclosed by his personal secretary and Prefect of the Papal Household, Archbishop George Gänswein  in the context of a broadcast on ZDF on the first anniversary of the election of Pope Francis. Four pages include the critical remarks to that controversial interview. Pope Francis explained himself at the time to the criticism that he is not taking a position on abortion and "gay marriage": "We can not always deal with the issue of abortion, homosexual marriage, and birth control methods. That can not be."  Among the enthusiastic omissions   regarding atheist Eugenio Scalfari about personal conscience as the autonomy of conscience, he stated affirmatively: "Listening to the conscience and  obeying it actually means to choose a thing known in the face of good or evil. And from this decision it depends on whether our actions are good or evil."
When Francis. gave to Benedict XVI the copy of the Jesuit magazine, the interview was already published.  Benedict underwent  a critical  analysis of the interview to a critical and transmitted to his successor the desired criticism "Pope to Pope," a total of four pages with "interesting" comments. What criticism Benedict XVI. directed to the interview, isn't  known to Archbishop Gänswein "naturally".
Archbishop George Gänswein told ZDF television interview:

"When Father Spadaro had then given the first copy of the interview booklet to  Pope Francis, Pope Francis had then given it back and said that you should now bring this to Pope Benedict, and you will see the first page after the table of contents is empty because Pope Benedict should write in anything he has in criticism when he reads it, and then pass on to me or back to me, which I then returned, sorry, I then brought it to Pope Benedict, so now I had only to repeat what Pope Francis had said, so you see Holy Father, here is a blank page, and here is a space for all   considerations, suggestions and  criticisms  and then I will return the packet back to Pope Francis. Three days later he says to me, here I have 4 pages, of course not by hand, but now dictated to sister in a letter and please give this letter to Pope Francis. He has done his homework. So then he says he has read it and has accommodated his  successor's request and had confirmed in fact, yes we say so, some considerations and also made some comments on certain statements or on specific issues, which he means  that,    perhaps what he would have said something elsewhere in addition.  Of course I will not say what, but it was interesting."

It leaves us none the wiser. We cannot assume that what Benedict wrote was a scathing criticism, much as we would like to believe it was. We really don't know where he stands, as in the past he espoused many Modernist ideas, e.g. giving credence to the ideas of the Freemason and heretic Tielhard De Chardin. I hope and pray that Benedict has now distanced himself from his many heterodox statements and has seen them for what they are.

He's already been critical of Francis when he wrote his own response to an atheist.

We have no idea what was in this "critique" and obviously Pope Benedict XVI thinks it is none of our business. So what is the point of publishing this story? All it does is raise speculation and cause division.

Its value is only partly measured by its ability to annoy people of your character.

"Who I am to judge?" I guess think the answer is "Tancred."

Would you care to explain what my "character" is?

Chris Ferrara would be proud of you. Labels are so convenient.

Labels, as anyone in any kind of productive enterprise knows, are essential to doing business. The only people I know of who are truly opposed to labels are those who want to evade being held accountable. People like thieves, snake oil salesmen, hucksters, second story men, Socialists, Catholic Answers Apologists and Feminists, just to name a few very real examples of certain types of people.

And "Catholic Neo Cons", of which you say I am one? Yes, labels are "essential to doing business" if you want to pigeon hole people and judge them, reducing them to stereotypes and dismissing them as irrelevant and/or worthless. And, of course, labels are absolutely essential whenever people say something that you don't like.

Why does someone like you presume to know whether or not Pope Benedict knows of this?

You're trying to have a reasonable, sustained discussion with CIB?

Must be some weird Lenten thing!

I’m provoking her to “write" another blog entry about what goes on here, like the last time she wrote one denouncing this blog for its defense of Voris’ Lenten Cruise.

It’s astonishing how many people read her. This probably has something to do with why Oprah has been the #1 show on daytime television for years.

The former, in placing himself firmly outside the catholic circle of trust cannot now be saved by the latter.
The current situation is an utter complete shambles that can only be rectified by both properly resigning and ceasing forever thereafter to use the title of Pope.

If it was too late for Benedict to change anything before publication, why was he asked to critique? And then to tell everyone? Is this to give the impression that he supported what was said by Pope Francis? What an awful mess!

If you notice, the interview was removed from the website after that.