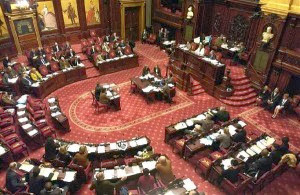 This is because of the error of "Humanism" where "human persons" merely have "dignity" instead of human beings having sacredness due to our being made in the image and likeness of God. When something is sacred it is cared for and protected and held high as something of great and special value. But they teach that we are not beings (think about what that word means). We are only a human variety of creature not much different that a dog and so as not to expose their stupidity completely and spark laughter they tell us we have "dignity".

I guess the poor people of Belgium think that killing a "human person" whose "quality of life" (according to others) is lacking will spare the person of their loss of "dignity". Not to mention the time and expense of caring for them, eh?

Coming Soon to a theater near us all.

Any words about this coming from Rome?

[Cue the sound of crickets chirping.]

I'm like John Kerry, weary. He has to defend an not so bad idea against the murderers of hope sitting up on their hill here and suggest and bribe that murderer of hope who sits at the bottom of the hill over there and to every compromise Kerry suggests the murderer of hope responds F You. Well I'm not exactly like Kerry but a little.

Who will stop this madness - this depravity - which seems to have accelerated on all fronts (religious, political , social) since Pope Bendedict's abdication? Is this only my impression?

Our Church leaders have completely stopped teaching Catholic Truth...authentic Catholics are going to be forced underground - probably we are already underground...who can we turn to?

Lord have mercy and come back soon!
OR
" Stop the world I want to get off!"

We are well an truly arrived at the nightmare of Huxley's "Brave New World."

Yes, we are the persecuted remnant. Blessed Michael Archangel, defend us in the hour of conflict.

I don't get all this religious people trying to force life down our throats. Religion is subjective, each one choses to belief what he/she wants.

Each individual should be able to do whatever he wants with his life. I love my life now, but i would certainly hate it if i had a crippled or undignified life. Whats wrong about that?

You say : "Each individual should be able to do whatever he wants with his life"?

God has established rules and individuals are free to break them.

Individuals are not free however to avoid the consequences of breaking these rules at a serious level.

Suicide however brought about contravenes Gods will.

There can be no place in Heaven for those who reject God.

If God doesn't exist, anything is permissible.