Scottish Priest Being Bullied for Writing Book About Gomorrist Bullying 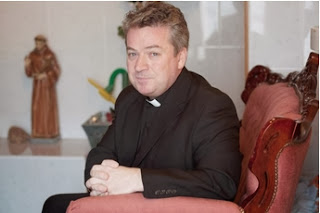 Edit: Father Mathew Despard has been suspended for only putting in writing what so many of us already know.  The book, available on Amazon, is in part about homosexual bullying in the Catholic Church.  Father was outside the parish church before a Mass in which the Bishop announced his decision to bully the priest.  The People of God expressed their opinion of this injustice by walking out of the church.

The book has been removed from Amazon in the UK.

Of course, we've been talking about homosexual bullying for a while now here on this blog.

The furious congregation of a church has walked out in protest after the suspension of their parish priest.

Only a handful of parishioners remained yesterday to take mass at St John Ogilvie's Church in High Blantyre with Archdiocese of Motherwell acting Bishop Joseph Toal after Father Matthew Despard was removed from his ministry the night before.

Before they went into church, people signed a petition calling for the reinstatement of Father Despard, suspended for writing a controversial memoir that claimed there is a culture of homosexual bullying in the Catholic Church.

When Bishop Toal, accompanied by Father William Nolan, tried to take mass, Geraldine Penches said she wanted to make a statement, and received a roar of applause from the congregation in a packed church.

Her short statement referred to Father Despard as "a very honest man" and said: "This is more scandal to rock the Catholic Church which has to be hushed up.

"Because Father tells the truth he is removed from his priestly duties. We the people are the church, not the bishops. When people said on Saturday night they wouldn't return, the Bishop said we'll close the church. I don't think Pope Francis would be very pleased with that."


[Scottish News] “The Catholic Church here in Scotland, and I am ashamed to admit this, has justified itself to Catholic papers by telling lie after lie, denying charges that are true, and claiming they have been defamed when the facts reported in the press are quite simply true.”

The priest’s shocking revelations will be another blow to the Church hierarchy, already reeling from the claims that Cardinal O’Brien tried to seduce a number of trainee priests.

The 74-year-old quit as Archbishop of St Andrews and Edinburgh after the accusations by former and serving priests emerged.

Fr Despard says in his book that he was the victim of inappropriate approaches during his time as a seminarian.

I shall add Fr. Despard to my prayers for innocent priests unjustly deprived of their ministries.

I know Bishop Toal to be a good, honest and holy Bishop put in a difficult position through the claims Fr Despard makes in his book, which having read, I can believe some of which is ture, but alas he also makes suggestions and innuendos that are false and highly damaging to the people they are made against. By all means pray for Fr Despard, but pray too for the Bishop trying to deal with a mess not of his making (he is acting administrator of the diocese), ALL who are alluded to or named in teh book and all who are being affected by the goings on caused by the publication of the ebook.

Let's see, the Scottish Parliment is introducing a sodimite marriage bill and concurrently a Scottish Bishop is silencing a good and holy priest for pulling back the curtain on the churches lavender mafia - coincidence?

IF this is such a faithful diocese, vocation numbers would be through the roof. If not...Judge them by their fruit

Walkout was stage managed both sat and sunday,tears switched on when the press came,for a parish of only 252odd regular parishioners I believe rent a mob was there,to treat a bishop and priest with disrespect during Mass was a disgrace,roll one the court cases for the truth too come out

But why dismiss a priest for merely writing a book, which from my pov, only tells the truth?

While I acknowledge that his claims are serious and should be investigated, people should also not just assume that Fr. Despard's claims are true. I attended Langbank, Blairs and Rome, although I did not continue to the priesthood. While I would hardly deny that in boarding schools full of adolescent boys, some sexual impropriety did not happen, I can say without any hesitation that I never encountered ANY of the large scale depravity that he alleges, either among students or priests. Indeed at Langbank and Blairs there were multiple occasions when students were expelled for engaging in sexual misbehavior, and I can also attest that we were constantly given spiritual guidance about living in a sexually appropriate and controlled manner.
When I read his book, one thing that immediately jumps out at me was the fact that Fr. Despard was dismissed from every single appointment that he was given in the church. Everywhere he went things erupted with him firing allegations and accusations like fireworks. I can't think of another case in the entire history of the Roman Catholic Church where this has happened. I know many good Scottish priests who most certainly are not homosexual and when I asked them about this book, they acknowledged that there have been individuals from time to time who have struggled with celibacy and the loneliness and isolation that can exist in the life of a priest, but they absolutely deny that they have ever encountered this "gay mafia" . In their opinion it is Fr. Despard who has sexual maturity problems and he induced most of the crises by making wild and unfair accusations, which then caused the other priests to react out of anger and disgust at him. That immaturity jumps out of his book from the very first page.

To deny or punish this priest for talking out against. It is a form of bullying ...lets not forget the lessons of marciel...many also said. That wasnt happening...and covered it up weres theres smoke theres fire .

I’ve seen this Mafia in my own diocese, and priests who don’t play ball get dismissed from post after post and eventually are managed out.

I knew a predator priest from the military chaplaincy who was an unstable individual, but had other friends. He described a visit to a pizza parlour with Brother Priests, but there was one who showed up, wearing a cassock if all things. When the waitress came, they all introduced themselves by their first names, but Father X in his cassock embarrassed everyone by referring to himself as “Father” and surname. The chaplain priest told me this story to let me know that this is what happens when you get disinvited by guys who are “cool” like him. When I told him Father X was right he threw up his hands and walked away. We didn’t work together for long after that, especially since I didn’t agree with his semi-discrete but obviously gomorrist lifestyle. He was later suspended. They already had all they needed to get him out of ministry long before, but they waited for years. After they put him on sabbatical, he moved in with his parents and pretended to be Theresa of Avila for ten years till his suspension came in, coinciding with the release of public documents. He died three days later.

By their fruits you shall know them.