Scotland is Introducing "Gay Marriage", Although the Majority is Against -- Even "Jedi Marriage" 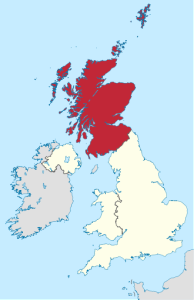 (Edinburgh) On Thursday, the Scottish Parliament will vote on the recognition of "gay marriage". There is little doubt that the bill has  a majority in Parliament, although a clear majority of Scots is against it. Thus Scotland follows the specification of the British Prime Minister David Cameron, who has already  legalized "gay marriage".
According to Daily Mail, 86 of the 128 MPs want to vote for the bill, which is thus directed to the appropriate Commission. This will work out the details and in a year as the House will make a final decision about it.

The End of Freedom of Speech

According to the initiative committee for the protection of marriage and family Scotland for Marriage,  the new law will restrict freedom of expression.  Limitations on fundamental and human rights of free speech for opponents of "gay marriage": "The promises of the government to guarantee the freedom of expression of those who oppose the law have proven to be empty words. It takes  clear, unequivocal and legally established safeguards to protect the civil rights of the majority of Scots who do not want this bill. "

Majority of Scots against "Gay Marriage"

Parliament wants to pass a law that is rejected by a large majority of Scots.  In the largest poll ever conducted in Scotland, more than two thirds of the 77,000 respondents were against the introduction of "gay marriage". The opinion has not effected the political level. There is hardly a party that can escape the gay [Gomorrist] ideology.  Scotland Prime Minister Alex Salmond, a Leftist Nationalist  wants to sign  the government bill into law.

In order to legalize "gay marriage", the definition of marriage needs to be changed. Thus begins a domino effect that destroys the legal foundations of marriage and therefore the family. In addition to the recognition of Church and civil weddings and registered partnerships, there a third category is to be created which may be called "Belief Marriage " . The National Presbyterian Church of Scotland protested the "arbitrariness" and described the introduction of a third category as "non-sense". This third category can make any arbitrary claims for rite, which is why Scotland there is  talk of "Jedi Marriage".   If the "Jedi believers" created their own wedding ceremony, it would be acknowledged, relying on the new Scottish marriage definition.
Text: Giuseppe Nardi
Image: Wikicommons
Translation: Tancred vekron99@hotmail.com
Link to katholisches...

If you find it appropriate to determine civil rights based on a vote of the majority--remember that there may come a day when the majority is voting against yours.

That is the presumption of democracy, isn't it?

Actually in the US constitution the balance of powers and the rules of (specifically) the senate are to protect the minority from the "tyranny of the majority".

That certainly hasn't prevented a lavender tyranny. I guess some rules are more equal than others?

More gay kids on the streets. More gay teen suicides. Most likely to be the victim of assault.

It is amazing how much power we have.

(And I'd remind you--being gay isn't a choice. Religion, and bigotry, is.)

Being a pederast isn't a choice, but maybe when pederasts can marry their victims, the whole world will shine like new and everything will be perfect?

Sodomarriage has been a real dud, almost no one showed up, and after all that press coverage and intimidation too.

Of course, "being gay", as you put it, is a choice. One can decide to identify with and promote a tendency to a disordered sexual attraction as natural and good, or one can deal with it as one ought to deal with any disordered desire or desire to sin, that is to fight it and overcome it.

We can name all sorts of rules and forced attitude and even laws that
represent the tyranny of the minority. In homosexual rights cases it is tyranny or the minutetety.

People who commit these terrible sins are being used by other agencies even more nefarious than themselves.

And when the law was put into effect, a minute number of people actually showed up to get married.

It's just a piece of paper, after all.