German Bishops Test the Situation and Want to Extort the Pope 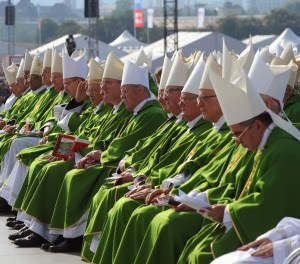 (Stuttgart) Coercive pressure by a significantly de-Christianized society, political extortion by the state governments turn off the money tap for Catholic hospitals and institutions (the morning-after pill decision of Cologne after the Green Health Minister waved the rod is in recent memory) for insubordination; a lay apparatus in the Church service, which is not infrequently Protestant to the bone after celebrating 50 years of the Council; a part of the clergy, who after decades of attacking the sacramental priesthood, are working as imperceptibly as possible for the "general" priesthood of the baptized; frustrated faithful Catholics, priests and religious, who are tired of being neglected or treated as pariahs because they interfere with the Bishops and Ordinaries attempting to give themselves a world-compatible appearance.

A small, honestly answered test of faith predominantly of priests, full-time church staff, parish councils and Catholic associations would probably unearth a frightening picture. Bishops incidentally are not the exception. Under such circumstances, it is not surprising that the Catholic Church has no more power for influencing the society of German-speaking countries, its appearance is distorted and  Catholic doctrine is confused by many voices. The de-Christianization here follows no law of nature. It has causes, an origin and strands of retraceable historical development. Much of it is the responsibility of the Church due to the mistaken thesis of the need to reflect the diversity of society in the Church, rather than as a Church to be a homogeneous, solid faith and a decisive factor in society. Something like this, the situation of the Church in German lands represent a Church where everything has to be taken "with joy" in  platitudes and pretending to see "a chance",  even if it is something ever so far from the Church.

Besiege Rome Without Armies,  But With Six Billion Euros

And who is surprised that the German bishops attempt open revolt. They do it on the subject of remarried divorcees and while raising their voices loudly against their former brother, the former Bishop of Regensburg and present Prefect of the CDF in Rome, Archbishop Gerhard Ludwig Müller. He doesn’t particularly like the current rebels much anyway. The rebellion is directed in reality against the Pope as the Vicar of Christ, the Church's teaching and discipline.

The German bishops have long ago lost their armies, but they can try to extort the Curia and the Pope with a bulging wallet (6 billion euros in 2012, church tax). Maybe even with a small threat of schism in the package? In fact, they have already done this on a small scale. An Austrian archbishop and cardinal have some experience with this. The bishops have their knowledge of rebellion in the German language area. The declarations of bishops in  Koenigsteiner, Mariatroster (Austria) and Solothurn (Switzerland)   send their regards. A disobedience that was is still not overcome today and spreads its poisonous blooms. This also explains why the bishops are so passive, compared to the disobedient priests around the former Monsignor Helmut Schüller.

It needed not the media favorite Francis to be reminded by a pope to poverty, although such a desecrated impression by the media was conveyed to the masses. The dramatic call by Pope Benedict XVI. in the Freiburg Concert Hall in September 2011, that the German church should become less worldly is unknown in modern church history. But the German church apparatus refused, any discussion was suffocated immediately and a good part of the bishops broke, if not openly, behind the scenes with the Pope. He had been already more tolerated than loved, as long as he did not too meddle too much in German affairs. Ultimately, however, he was in the way of the pandering to the Bundesrepublik cartel.

The extortion of Benedict XVI. on the issue of remarried divorcees was a complete non-starter. Cardinal Lehmann knew that. When Pope Francis, the fleet footed Latin American, which by his Romanesque origins seemed to lack German dogmatism, gives cause for hope. And you're ready, behind the media fueled enthusiasm, to put the Argentine to the carrot and the stick, like the angry reactions to the reaffirmation of Catholic doctrine in matters of marriage sacrament shown by Archbishop Müller. The proverbial checkbook policy of the German Federal Government has its parallel in the German church. And that, unfortunately, is not always to the advantage of the Church. The Rhenish alliance, which called the shots at the Council, knew to gather votes in the Third World.

It is becoming apparent that much will depend on the employees in the looming tug of war that threatens to surround the Pope. The Roman Curia, which some residential bishops so would like to weaken or at least to bruise has yet to fulfill important tasks. Pope Francis has been exposed to some danger in recent months by some over-zealous and some little sense of the importance and dimension of the papacy. He has opened doors that were closed with good reason. The German bishops are now trying penetrate with their list of demands for the Church. Pope Francis does not seem impervious to advice, so the hope is that it gives the right consultants his ear, as was the case in recent weeks. Whether it was only a wave motion that knows the tides, is yet to be seen.

Much Will Depend on Vatican Employees, Even More For Those who Pray

Francis may not have been aware of some dangers. However, it is time that he becomes aware of them. The rumblings among Germany's bishops will be brought hopefully to his ears. We can only hope that he finds better counselors than those who told him last summer, to submit to questions in two Scalfari articles and the need to recommend a "dialogue" with the atheist opponents of the Church. A "dialogue" which, while it harvested much fruitless applause, yet caused substantially abundant confusion.

The Pope who is being assaulted with a breakaway rush of rebellious German bishops like Reinhard Cardinal Marx (Munich-Freising), who is also tragically a member of the C8 Cardinal Advisors, or the bishops Stephan Ackermann (Trier) and Gebhard Fürst (Rottenburg-Stuttgart), to call a few by name, have some work to do. Whether and how he will be able to repel the intent of this Fronde and to preserve the Catholic doctrine intact, will be decided by how he will go down in Church history. The despised and oppressed faithful Catholics should be ready to talk. They will be very persuasive, especially in prayer, atonement and sacrifice, but also by their voice to the world to participate in this struggle to fight off and defend the Church.

Benedict XVI has no one but himself to blame for the situation in Germany. He had more than two decades in the CDF to intervene with John Paul the Magnificent (after all, "Great" cannot possible suffice for this about to be santa-subito Pontiff). Then, during his reign, Benedict appointed young Modernist bishops and Cardinals that will effectively finish the destruction of the legacy of St. Boniface. The sacred tree of Odin has been replanted and nursed for 50 years by the Conciliar and post-Conciliar gardeners. It is about to flourish. And who is to blame? The dogmatically corrupt Popes and Roman Curia.

Let's start saying it as it is.

Let's not forget the guilt that belongs to the slothful Catholic laity who did nothing to know the Faith and the Mass and defend both against these unCatholic priests, bishops and popes. Instead they willingly followed the thief who climbed the wall into the sheepfold instead of the voice of the Good Shepherd.

Alright. Let's start. Even you blame the Papacy and Rome in general for the faults of some Germans in this case. Either the Catholic Church here and now is doomed to quick destruction, and thereby false, or you are as rebellious as they are. 'Dogmatic corruption' from Rome? What? Where? All I ever read is irrational complaining and disrespect (indeed hatred) on these useless blogs. What is the point? Do you write from ambition? Cultivating a small group of 'yes-men' isn't a serious offensive.