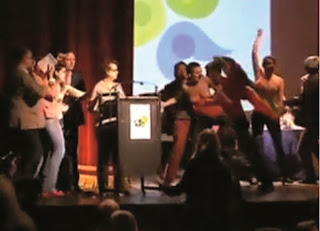 (Brussels) Archbishop Andre-Joseph Leonard of Brussels-Malines was again attacked by pseudo-feminists of FEMEN. As of last April the disturbed, paid "political activists" came from the red light district to a meeting, in which Monsignor Leonard participated in as a speaker. The reaction of the Archbishop, now already familiar with the methods of the extremists, robbed FEMEN of some of the peak of their performance.

In the red light district hired "political activists" are hired to appear topless and again target the brave Archbishop of Brussels-Mechelen. There are probably lush cash payments for the FEMEN-strippers in the background in Belgium (see separate report Who's behind FEMEN protest and their anti-Christian activities? Paid activists from the red light district). The incident occurred last Friday night in Brussels during a meeting of the Catholic St. Michael's College.

While the former French minister and member of the Pontifical Family Council, Christine Boutin spoke, topless FEMEN stormed onto the stage and wrapped her with a rainbow flag. The FEMEN activists were accompanied by a bunch of left-wing extremists, which were meant to serve as a sort of bodyguard and extras in the stylized media appearance. After they had interrupted Madame Minister, they hurled a pie at Archbishop Leonard's face. The Archbishop stole the show from the horde by tasting the cake with a subtle smile.

The first attack against Archbishop Leonard by FEMEN occurred last April during a podium discussion at the University of Brussels. The women shouted sodomophilic slogans and poured water on the archbishop. He said nothing, but reposed himself in prayer.

The European Bishops' Conference lent their support to the Brussels Pastor with their solidarity. The FEMEN activists were described by the bishops as "completely implausible and without any sense of decency." That Archbishop Leonard's discussion with an atheist was disturbed by FEMEN, was proof that the Church has standing in the debate in a pluralistic society, while FEMEN tries to prevent this.