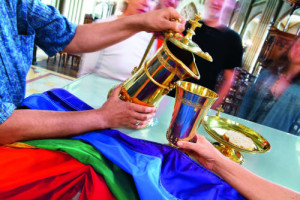 (Basel) Catholic teaching is clear by divine revelation on the subject of homosexuality. The Bible uses strong words to describe the phenomenon of sexual disorder. Nevertheless, there are Catholic priests who are unfaithful to the Church's teaching and give aberrosexual couples even their blessings. Die Neue Zürcher Zeitung published an article ​​on 28 July calling attention to the contradiction. Adamim, the “Association of Gay Pastors of Switzerland ", another paradox, advertises on its website the “Offer” of homosexual-friendly priests who are willing to also bless aberrosexual couples in a religious ceremony. It would be no exaggeration to assume that among the 20 homoheretical priests that there are at least some active sexually. Such as "Mario, Cath. Pastor” on Adamim’s page, must tell of his aberrosexual history without being a whit ashamed, although he is a Catholic priest.

Aberrosexual Priest Reading of the Bible with “Gay Glasses"

"I had my first boyfriend at 17. Thanks … in the single rooms we were able to live a very close and intimate relationship. Since my childhood ... I wanted to be a priest. This profession has always been very intriguing. At 30 years ... I took my first parish as priest. 15 years ... I had no sexual partner, but masturbated regularly. I was happy ... As a young pastor I fell head over heels with our sacristan. He was 9 years younger than me and not gay. The whole thing was horrible ... passionate for me. I was jealous when he talked with other people. Finally ... I realized that I could no longer keep the whole thing under my cover. It was clear to me that the sacristan, without realizing it, had opened all my gay valves. I only worked… kept to my role and made on action, so in my inner emptiness, and loneliness I felt dry in any spare moments. I ... took a long time out, cured me and started a psychological therapy. Now ... I learned to trust my assessment. I accepted it and tried to incorporate it into my life. I came out to my family and in the pastoral care team. To my great surprise, no one has rejected me. These experiences have made me ... really strong that I even felt the joy of time on my being gay. It's still like that. I stopped now actively looking for a partner. I went for the first time to gay bars and discos. I even made ads in gay magazines. I also met men know and had relationships. That these men also stayed in the rectory and shared time with me, did not bother anyone. There were ... but also crises. The fact that I was a pastor and a public person, also deterred men, and that they could not live with me in general. There was also a time when I wanted to give up the office. There were times when I thought I could never bring my work and my private life under one roof. It was then a gay friend (no sex partner), who had strongly advised me to stay in the church because it would be very important - also for gays, that I as an open gay priest would act out with my homoeroticism. I began to grapple with gay theology. By that time I read the Bible with gay glasses. My relationship with God was different. My religious language was soft and tender. It was clear to me personally that there was a gay variant in the history of creation, and that God was not a homophobe. The topic of homosexuality ... is now public and no longer a taboo. "

Everything under the eyes of the competent bishop, who seems to look away from all the "positive experiences".

The association Adamim, based in Bern, is published on its website in open contradiction to Catholic teaching as follows:

We are an active group of gay men in the service of the church: pastors, pastoral workers, priests, catechists, theologians, hospital chaplains, religious ...... from different denominations. Living as a homosexual in the Christian churches is not always easy. As an association, "Adamim", we work in the public sphere so that homosexuality is recognized as a natural variety of human sexuality, and it is the unique ability to love someone of your own sex.

The Catholic "gay pastors" maintain good relations with the Lesbian and gays of church-based Basel (LSBK), an "ecumenical community for all" "gay, lesbian and transgender" with his own "church". The "services" take place at the Elisabethen Church (OKE): "In the spirit of the community-based services they are prepared by alternating teams together with pastors and priests of the three national churches (Reformed, Old Catholic, Roman Catholic). This creates both traditional worship and new and experimental forms. In every service we celebrate a Eucharist or Lord's Supper, "it says on the website of LSBK. The Catholic viewer gets the creeps. The Open Church Erzsébet part of the Evangelical Reformed Church of the City of Basel, which is "fully behind the project".

The website of the Lesbian and Gay Church Base Basel also states: "For several years the OKE is known to be supported by the Roman Catholic Church of the city of Basel. Operating since 1999 at the OKE, Catholic theologian and pastor, wife Eva Südbeck-Baur, as a commitment to OKE and LSBK has given a courageous witness, laying emphasis on her appointment to office, her installation on the 19th of September in 1999 will be celebrated as part of a LSBK-worship." Whatever that says. The fact is that the Roman Catholic Church of the Canton of the City of Basel is co-sponsor of the OKE and also finances this. [With Church-tax] It is also fact that Südbeck-Baur at the Elisabethen Church has celebrated "services" for aberrosexuals. The cantonal church is a peculiarity of Swiss church law.

The Catholic Church of the City of Basel is promoting the Open Churches Erzsébet officially on their website:

You experience new forms of worship and celebrations (...). On Wednesday afternoon pastoral care is offered on Thursday afternoon laying on of hands. (...) The Open Church Erzsébet City is the first church in Switzerland. (...) It offers new, low-threshold access to faith and church, invites, without forcing, those interested and enables new approaches, the challenges of the modern city needs, without losing their profile.

Eva Südbeck-Baur is the example of a "modern" Catholic multi-functional official in service of the Church: the lesbian and gay worship, worship of experimental design, inter-religious dialogue, Christian-Jewish understanding, publications critical of the church by the Caritas staff. Südbeck-Baur in the fall of 2012 left the Open Church Elsbeth and since the beginning, has been primarily employed with Caritas. Together with her ​​husband Wolf Südbeck-Baur is an employee of the newspaper critical of the Church - Independent Journal of Religion and Society[Unabhängige Zeitschrift für Religion und Gesellschaft]. The journal "is interested in what breaks through on the fringes of the denominations and religions" and "exerts a critique of structures and institutions, agencies and individuals, rites and dogmas, anything short of all that prevents religious awakenings." The latest issue of Aufbruch is dedicated to the theme: "Homosexual on the road to equality."

In the diocese of Basel "church celebrations" for gomorrist couples have long been the practice. That was under Bishop Kurt Koch [Current Curial Official for Christian Unity] who did nothing about it before he moved to Rome in 2010. Back in November 2003, a Pastoral Conference of Cantonal Church of Basel-Country, a "blessing ceremony" for aberrosexuals was approved by a large majority, although the Swiss Bishops Conference had rejected such. 2004 events were organized in several parishes in the Canton of Basel-Country as completely normal: held for lesbians and gays as in the Parish Center Bruder Klaus in Liesta and the parish center Epiphany in Füllinsdorf . "Partnerships for gays and lesbians still have a hard time finding recognition in our society and in our Church," says one of the Pastoral Conference Basel booklets published, Celebrate the Love? Bless Love. "That's why they needed a sign a binding and strengthening commitment" 'to live the gift of their love as a valuable and liberating gift.'" As early as 21 January 2004 an enthusiastic Basler Zeitung wrote: "Specifically: Gay and lesbian partners have the opportunity to bless their love before a pastor of their confidence. Legally, this blessing really has no legal consequences. But to us, it is about making a mark,' said Father Felix Terrier. "Terrier is pastor of Liestal.

Bishop Gmür Silent on Gay Heresy in His Diocese

While the Bishop of Chur, Vitus Huonder strongly condemned the practice of blessing aberrosexual couples in the Catholic Church by the Neue Zürcher Zeitung, Felix Gmür was conspicuously silent. The Neue Zürcher Zeitung therefore headlined its article with, "Bishop of Basel Tolerates Blessings of Homosexual Couples."

The Catholic People's Party (KVP) of Switzerland sees "a need for clarification regarding its sexual orientation and practice" by Bishop Gmür. In the diocese of Basel, the bishop is elected according to the old Cathedral Chapter and not only suggested. The Pope has the right of confirmation. "The drafting of the profile of requirements of the new bishop was on the side the church's canons, 'required' gender competence," says the Catholic People's Party . As Gmür was elected by the chapter to bishop in 2010, he fell into a conversation with the newspaper Thurgau on the subject of sexuality as a "matter of conscience for each individual," which says everything and nothing. The newspaper knew, but also reported that the new bishop from Rome would work for the abolition of celibacy and the admission of women to the priesthood. Gmür did not intend to defend celibacy. This is not necessary if he "personally" lives a "well ordered" life. Another response that raises more questions than it answers. His toothless dealing with the parish initiative, the Swiss branch of the Austrian and West German Pastors' Initiative comes in a formula to express the act most of the bishops in the German language by the "expansion of dialogue, not sanctions." The formula actually means to suspend the responsibilities and consequences.

Bishop Gmür has already been seen in the middle of an image in the category of Horror Missae. It shows the Basle bishop surrounded by new priests full of colorful stoles with daubed hands. In 2011 he was inaugurated the successor of Cardinal Kurt Koch at the forefront with three new priests of the traditional Swiss Diocese. The ordination took place on 5 June 2011 in Saint-Pierre de Porrentruy. The priests ordained were Romain Gajo, François-Xavier Gindrat and Antoine Dubosson. Four to eleven year old children had designed the stoles. Children understandably do as they are led by adults who should know better. Because we know: not all that well-intentioned, is also well taken.

It sure does give a Catholic the Creeps. It make me also feel faint. Is there a Nuncio around I wonder.

Well, this is Cardinal Kurt Koch's old Diocese, and he was allowing this to go on when he was here, so it's hard to say what good the Nuncio will do, but let us not give up hope.