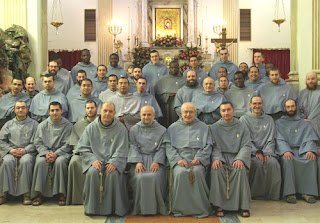 Edit: also, the Vatican website has finally made Summorum Pontificum available in various languages.  So that's another positive indicator.

(Vatican) The appeal of the famous traditional historian Roberto de Mattei, was followed by a large wave of solidarity for the Order of the Franciscans of the Immaculate. Within a week, 3515 letters of support and protest were received in Rome. This violent reaction was not counted on in Rome.  De Mattei interprets two Roman events as a direct response to this welling of solidarity. It is not excluded that the decree will be withdrawn or amended says de Mattei.

The protest against the decree of the Congregation was expressed with letters. They represent an appeal to Pope Francis to reverse the massive intervention of the Congregation under the direction of Cardinal Prefect Joao Braz de Aviz against the exemplary Order. This was announced by Professor Roberto de Mattei on the traditional Internet news service known as Corrispondenza Romana. The initiative was begun by the well-known historian, to address the initiative to the competent Vatican authorities to protest with letters of support for the canonically recognized Franciscans of the Immaculate founded by Father Manelli and Fr Pellettieri in 1990, against the unequal treatment of the Old Mass for the New Mass and the violation of Motu Proprio Summorum Pontificum of Pope Benedict XVI..

De Mattei was very satisfied with the spontaneous international solidarity from many countries including Germany, Austria and Switzerland. De Mattei sees two events in Rome directly related to the appeal for solidarity and so many numerous in-depth responses. The first event is the opinion of Vatican spokesman Father Federico Lombardi SJ of 2 August. In Rome we have seen after the protest, that the reactions were more severe than expected. The first measure was therefore, calm down. Father Lombardi stated officially that the decree did not intend to disagree with the provisions of Summorum Pontificum of Pope Benedict XVI..

That allows us to assume, says de Mattei, that the decree may be withdrawn or amended. That the Franciscans of the Immaculate have banned the celebration in the Old Rite and nullifies the Order, is clearly contrary to the Motu Proprio. Currently, the situation should calm down again, then clarity will rule.

The second reaction de Mattei perceives is the appointment of Curial Archbishop Guido Pozzo, Secretary of the Commission Ecclesia Dei, on the 3rd of August. An unexpected return after Pozzo had taken another job at the Curia until the fall of 2012. De Mattei sees reshuffle as the strengthening of the Commission, and thus a clear indication that the Commission should not be abolished. De Mattei himself had raised the question on July 30th about the intention of the decree against the Franciscans of the Immaculate and asked whether it abolished the Motu Proprio and the Commission should be abandoned. De Mattei interpreted the two Roman reactions of the 2nd and 3rd of August as a signal that Pope Francis neither wants to abolish the motu proprio nor dissolve the Commission Ecclesia Dei, "That is because of the strong reaction of the traditional circles" against the decree, says de Mattei.

The provisional government of the Order goes back to an apostolic visitation by Monsignor Vito Angelo Todisco, who was not known as a friend of the Order nor the tradition. On the basis of a "tendentious" report to Rome, where an "alleged survey" played a central role rolling in the hard treatment against the Order. While Father Alfonso Maria Bruno has a central role, he is the only Franciscan Friar of the Immaculate Conception, who is himself happily opposed to religious discipline is in the picture, which would convince anyone who is on the Facebook page of the Order, which page Alfonso Bruno is the administrator. It was he who tried to steer journalists to misleading information, reporting in a specific direction against the Order's Leadership and against the Old Mass.

Neo-Commissar Father Volpi has just returned from vacation.  It was now to be seen, says de Mattei, whether Father Volpi is driven by the same prejudices against the Order and the Old Mass as Archbishop Todisco.  The historian is convinced that a progressive separation of the rebel group within the Order will be inevitable. Leading the group of rebels is Father Alfonso Bruno, Angelo Geiger and Angelo Gaeta. This part could have all been easier if he had correctly left the Order. Instead, the whole Order was drawn into the conflict. It may also be that - as with any conflict - there is a "gray zone" that keeps watch to be on the winning side. "In the end, the truth always wins," says the historian de Mattei.

It has been shown in all cases that a rapid and decisive response by Traditional circles can get things moving, if the persistence needed is available.

THis is excellent news. It is indeed possible that the unjust edict from the Congregation for Religious will be amended or withdrawn. Cardinal Aviz should be sacked. It is a very big embarrassment for him. He is also not doing his job with enough discipline regarding the USA LCWR nuns and other progressive women religious. He is not being faithful to Rome....instead, he is siding with the nuns.

There should be a campaign on to have him removed. Maybe he could get a job cleaning toilets in the Apostolic Nunciature in Tibet( LOL)

This proves that this Pope Francis had better not do anything against Catholic tradition or the Tridentine Latin Mass. The reaction worldwide by traditionalists would be so much against him that he would have to resign.