Amid Calls for Civil War, France is in Turmoil over Government Attack on Marriage

Edit: I just repeated the narrative on Galliawatch below. Amid the calls for civil war and Frigid Barjot now allowing protesters to call for the resignation of France’s President Hollande and the socialist government, there is a tumult that’s shaking all of France. Such is the French people's frustration with a government which refuses to listen to the voice of the people, as they continue to shove something down their throats they clearly don’t want. The police have also gotten more violent as they have in the past, even resorted to using tear gas against pensioners and little children. The events of the past weeks have also been intensified as the French media attacks the Grand Rabbi of France for some minor delicts (if we were to judge him by the same standards as Martin Luther King is generally judged) which seem motivated by the current campaign to show displeasure at any disapproval for the current campaign to destroy marriage.  Here is the report:

[Galliawatch] The Senate passed the bill on "marriage for everyone", i.e., gay marriage and adoption. The country is in an uproar. The bill now goes back to the National Assembly. I am referring you to Le Salon Beige for the photos. I'll try to have a coherent post up by tomorrow. 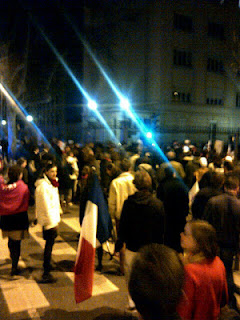 Click here for a series of photos of today's protest in Lyon (above). The photos can be enlarged by clicking. The police were taken by surprise by this spontaneous outburst of dissent directed at the government and the Senate, on the part of hundreds of citizens of Lyon.

In Paris, near the Luxembourg Gardens, where the Senate is located, thousands (some say 7500) protested. Below, the mayor of Montfermeil, Xavier Lemoine (in the tricolor scarf), carries a long banner that reads "Don't touch marriage. Take care of unemployment." Lemoine has said he will refuse to perform a parody of the traditional marriage ceremony. Click here for much more. 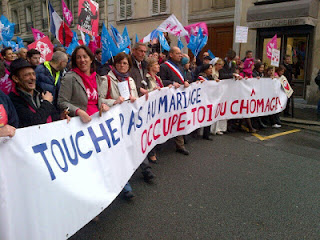 "Only one solution, dissolution". 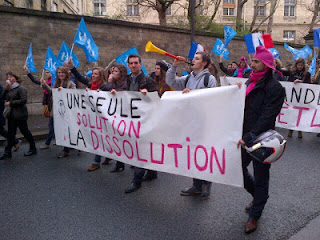 Below, Frigide Barjot. Her tone was tougher than usual. She is quoted by Le Salon Beige:

"Hollande wants blood, he will have it! Everyone is furious. We are living in a dictatorship. (…) If there are cries for Hollande to resign tonight, unlike the other times, I will not prevent the slogans."

Apparently a deal was cut between the Socialist Party and Sarkozy's UMP party to accelerate the voting process. UMP deputy Philippe Gosselin declared:


"By accelerating the legislative procedure to escape the demonstration against 'marriage for everyone', scheduled for May 26, the president and his majority are readying for the worst: this is an incitement to civil war." 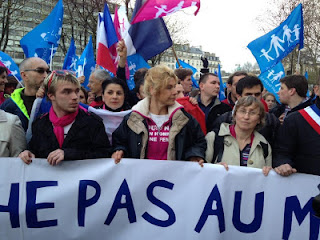 Below, the "Hommen", a male parody of the Femen, create a fiery spectacle:

Below, Boulevard Saint Germain and the heart of the Latin Quarter.

Below, the police line up with tear gas.

The next Manif Pour Tous has been moved up to May 5 from May 26. This is an obvious response to the calendar changes made by the government.

I'm stopping at this point because the events are too turbulent to properly analyze in one post. But it is clear that this whole protest movement has gone far beyond the issue of gay marriage, although that is still the major focus. The various scandals in the government, the stubborn refusal by the government to listen to the people, and the economy are putting incredible pressure on François Hollande who seems to be inanimate at this point.

(One last note on another topic, the grand rabbi of France Gilles Bernheim has resigned amidst another scandal of lying and plagiarizing. I will try to have more details soon.)

Events are stampeding through the streets of France. The more Hollande resists, the more determined they become.

They need to overthrow that Stalinist f**k, Hollande, and the entire communist government of the Fifth Republic.