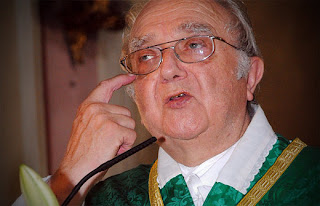 (Graz) The regular pastor, the Reverend Charles Tropper, who was dismissed for criticizing aberrosexuality and Islam from the Austrian Diocese Graz-Seckau (Styria) can now fully exercise again the priestly ministry in his parish of Veit am Vogau. At the end of August this year, however, he will be retired. This was announced this Thursday by Vicar General Henry Schnuderl. The pastor was, according to Schnuderl, guilty of making "terrible simplifications” and having an "uncultured style". Pastor Tropper had been secluded during the Holy Week and the Easter season under a sermon ban. Tropper was accentuated his position in a letter to the parish about Gomorrism and Islam. A homo-association made charges against the priest and had been ruled by the prosecution, after a preliminary inquiry, to be without substance. The Diocese, however, was called to intervene “in the necessity, of boundaries”. Link to katholisches...
Posted by Tancred at 1:10 PM

Thanks for the update. Maybe at least it won't end so badly for Pastor Topper.

The Diocese of Graz must take lessons from that Rorate Caeli website. They employ the very same modus operandi when it comes to censoring words of truth. No matter how charitably they are stated.

Anonymous 13 April 3:30 P.M., Sometimes I feel like a heretic if I have a criticism of Rorate. But I find that I am not alone. Your statement is true and well said. I still visit occasionally but am sometimes annoyed. You or I or others should surely not continue to be surprised therefore not annoyed. Somehow though, I time and again am. We do not have to be subject to their dictatorship so I don't go there often.