Bibles in the Fiction Section at Barnes and Noble? 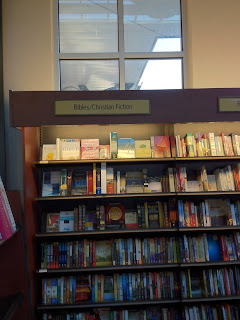 Edit:   In a market where copies of the world's best selling book are up, at least one Barnes and Noble sees fit to cram Bibles into the Christian Fiction section.

This is a Barnes and Noble store and the photo appeared in an Atheist message board at reddit. The location of the store is currently unknown but there have been similar stories cropping up from time to time that Barnes and Noble had decided to place the Bible in the fiction section.  It's not the most auspicious linkage, and of course, the atheists were eager to make much of the negative associations in their usual saturnine way.

Barnes and Noble is a major corporation, and major corporations have a habit of being fairly unsympathetic to religious points of view in a gradual, sort of inevitable kind of way. Indeed, their arrangement with Starbucks certainly points in that direction.  Like Target, for example, which has braved boycotts to support Planned Parenthood and is now supporting the legalization of gomorrist couplings.

Maybe there's no room for Christianity in McWorld?
Posted by Tancred at 7:12 PM