18 Young Novices Are Vested in the Franciscans of the Immaculata

Edit: this really speaks for itself in many ways. 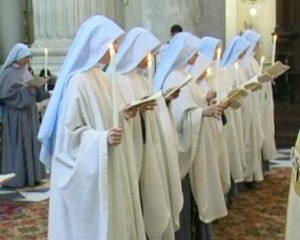 (Avellino) On the 1st of August a investiture of the new novices took place for the Franciscans of the Immaculata.  18 young women were given the habit in the tradition bound cloister in the presence of the General Superior of the Franciscans of the Immaculata, Father Stefano Maria Manelli, at the Pilgrimage site of the Madonna del Buon Consiglio of Frigento in Avellino, Italy.  For the occasion, Father Gabriele Pellettieri said Holy Mass in the Immemorial Rite.

The sight of such a large number of young women, receiving the veil of a religious order, has become a rarity in Europe.  Before the Motu Proprio Summorum Pontificum, allowed by Pope Benedict XVI, the women's branch of this young, tradition bound Franciscan order has had about 10 entrants to its Italian novitiate yearly.  Since then their population has almost doubled, as the blog Cordialiter noted.

"The classical form of the Roman Rite is a true treasure for the Church, it increases priestly and religious vocations.  Should the trend hold, in 50 years the majority will be of the new, tradition bound orders or old orders, who have been restored to tradition", says Cordialiter.

The Franciscans of the Immaculata were founded in 1982 as a women's branch of the Franciscan Order of the Immaculata founded in 1970 by two friars.  In the beginning of the 80s a group of young women decided to lead a Franciscan and Marian life a severity.  The first convent was formed from the Philippines and received recognition by the Diocese through the Archbishop of Manila.  In 1988 three sisters founded the first convent in Italy, which was recognized by the Archabbot of Monte Cassino.  In 1998, Papal recognition as  Society of Apostolic Life was given.

At the present there are more than 300 sisters worldwide in 47 houses, of which 15 are found in Europe.

Email ThisBlogThis!Share to TwitterShare to FacebookShare to Pinterest
Labels: Demographics, Immemorial Mass of All Ages, Tradition