Diocese of Münster:  The hate of the Conciliar Sect in the Church is put on display -- it shows itself in sexual depravity and an aversion to the holy.  In the Diocese of the Lion, no less..

(kreuz.net, Münster) From the 26th of February to the 15th of April a pornography expedition was held in the church of St. Erpho in Münster, Westphalia.

The pornography expedition bore the misleading title "Between Caritas and Eros -- Love". 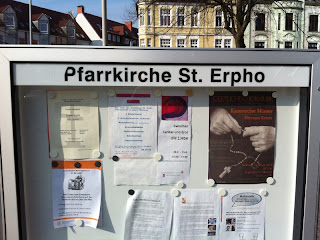 One of the church sponored "paintings" features a woman raising her shirt to reveal her bare breasts that's been smeared on an old Mass book.  The page on which this is done is August 9th, the Feast of St. John Vianney.

Kreuznet goes into some detail about the various paintings and has pictures at its website, they are clearly pornographic and blasphemous.