How Diverting: A Witch's Night in Mainz Cathedral 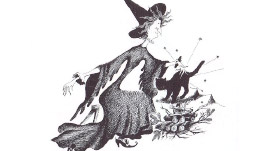 The way through the Cathedral was accompanied by spooky owl cries, rattling, and the blasts of fanfare.

(kreuz.net) Already last May the Catholic Educational Institute with the Society of the Friends of the Organ hosted a witches night in Mainz Cathedral.

This was according to 'Nachtrichten Blatt' for the association of Lower- Olm - ten kilometers south of Mainz -- on the 6th of May.

At the beginning the Mainz Cathedral organist Albert Schönberger greeted the almost one hundred guests to the unlighted church.

These went first -- with candles leading the way  -- to the crypt, where the "distant organ tones" were audible.

In the crypt, the group viewed the former house organ of the famous Mainz Church musician Heinrich Rohr († 1997).

The next station was the memorial chapel -- the former chapter house of the Cathedral Chapter.

There the house organ of the Mainz church musician Heinrich Rohr had found a new home.

On the way through the Cathedral, the participants were accompanied by spooky owl cries, rattling, and blasts of fanfare.

Even as the further path through the candlelit Cathedral there were sounds reminiscent of the strange sounds and noises by "the mischievous deeds of witches"  -- as the 'News Article" put it.