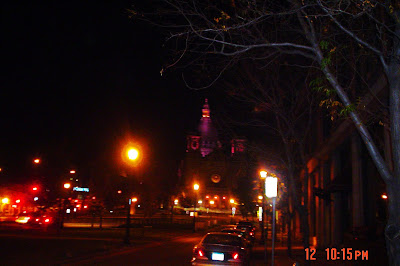 In a fit of urban renewal, this once poorly attended inner-city parish has been brightened and made comfortable for the childless children of the upper-middle class and others.

The pastor insists that this Purple Dinosaur hue, which shares a certain resemblance to his erroneous theological opinions, isn't for any particular feast on the Roman Calendar, it's supposedly for Breast Cancer Awareness month.

We've heard from certain sources that a correction is under way since Saturday. This is clearly a message of being of the world and not in it. The people who run this parish clearly don't have their feet on the ground at all.

The Pastor of this parish insists, amid all of the liturgical abuse and his soft-shoe doctrinal routine that he's against homosexuals being married, but he doesn't want to be quoted. Surely, he was forced to fire his 'artist in residence' who has been visible in the media lately for her "brave" dissent from the Church's teachings. We think the people who attend Mass here and use this facility have a right to know the truth about the Catholic religion, even if it sends them down the street to the Episcopalians.

We think the people who attend Mass here and use this facility have a right to know the truth about the Catholic religion, even if it sends them down the street to the Episcopalians.

It's my understanding, probably as a preventive measure, is that he acted on his own before the chancery knew anything.