Papal Ceremoniaire Expelled from the Vatican 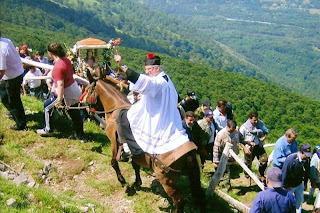 (Vatican) This information was hardly known, but it is not without significance. The Italian Monsignor Franco Camaldo, 61, from Lagonegro (Potenza), formerly of Papal Ceremonies, whose name often appeared recently in connection with a "gay lobby", was removed from the Vatican. Monsignor Camaldo was deported as a canon of the Lateran basilica "with right of abode." That is to say that he has to leave the Vatican.

Monsignor Camaldo appeared, because of his "old and intimate friendship" in the headlines with the Former Gentleman of His Holiness, Angelo Balducci, as investigations were launched against the Balducci-Anemone conspiracy ( see separate report ). It was about forcing the contracts of large firms.

Although he is not from Rome, the whole career Camaldos played out from Rome under the pontificate of Pope John Paul II. In June 1984 he became an Honorary Prelate of His Holiness and Papal Ceremonies. Soon, even the title of Honorary came Conventual Chaplains ad honorem of the Sovereign Military Order of Malta and the title of Knight of the Grand Cross of the Order of St. Maurice and Lazarus were added. More melodious tributes were yet added.

At last Msgr. Camaldo was put into play by Patrizio Poggi. Poggi, a former priest, had been laicized for child abuse. Italian justice sentenced him to several years in prison, which he has since served. Recently he reported to the police and claimed that there is a "ring" of homosexual priests and laymen active in Rome, the young men and children to perform as prostitutes. However, Poggi was deemed not credible. He was arrested for libel. The prosecutor denied the allegations Poggi about a pedophile ring. However, they acknowledged in this context that there are aberrosexual priests in Rome who live out their immoral desires.

The Corriere della Sera wrote on the 29th of June that "the investigating authority in its report to the coroner, the existence of a great number of documented young foreigners of different nationalities who prostitute themselves for money to churchmen in Rome. Homosexual relationships without criminal relevance." Criminally irrelevant, but canonically yes, albeit on a very different level. What is not criminally punishable for the state, it is for the Church, for a homosexual act is a serious moral failing. While the state authorities identify only child abuse, Church law requires other scales and measures.

Is the removal of Bishop Camaldo such a "measure"? The question is how the Church deals with aberrosexuality, one of the most important current challenges. The zero tolerance against pedophilia was proclaimed by Benedict XVI. and confirmed by Pope Francis. Francis also spoke of the existence of a "gay lobby" in the Church. How is the church to deal with it? This is one of the central questions. 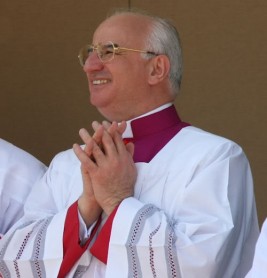 Being removed to the Lateran which is actually in Rome's 'gay quarter' does not seem to be much of a punishment.

As I see it the Italian system of justice is somewhat peculiar and police practices often peculiar and corrupt. The former priest pedophile following his claim of a prostitution ring etc., he was immediately arrested for libel. I don't know if that is generally how the libel law works there but that too sounds peculiar.

This is silly. Why is it some guys get laicized for their wrongdoings and others just get put out to pasture in a rather plush pasture? I am not saying be horrid about how people are treated but as far as having a standard for one group and different one for another, is two-faced at best and shows a poor attempt on the Church's part to handle willingly such problems. This is also a credibility issue.

Why is it okay for a mere accusation to cause a priest to *disappear* with no chance of clearing his name while this sort disagreeable behavior on the part of higher-ups gets a pass with sudden *confusion* about what to do?

How about this cricket in their cassock: you want to work in the Vatican, this the code of conduct, A, B, C. Violate these, you're on your own. Go back to your own diocese, or go find a 7 Eleven to work at. Enforce that a few times and watch all of this disappear.

I think Francis is a Pope who talks the talks but doesn't walk the walk. He goes on about his humility routine, prancing around schoomzing the crowds, but sure doesn't make an effort at being humble enough to embrace the Papacy for what it is and LIVE it; to take the ruler to a few clerical knuckles. At the same time, I can see where the Popes want to tread lightly. They don't want to end up like Pope Luciani.

Another JP II appointment. He was a high profile JPII member of the Ceremonies staff, and he came in under the disgraced Bishop Magee when he was Papal MC. Wasn't it exposed that Magee was gay too? I think so. Anyway, I know he was made Bishop of Cloyne,Ireland in 1987 by JP II and was replaced by Piero Marini, and that Magee resigned from Cloyne a year or so ago in disgrace because of a flood of abuses and pervert priests under his watch.
Another one of the JPII Ceremony crew appointments, a Polish priest appointed a year or so before JP II died was just made Archbishop and the Papal Almoner.
I would not be surprised if Piero Marini is gay himself. He's almost 72, and a few months ago came out publicly in favor of gay unions.
Marini was inseperable from another former member of the Vatican Ceremonies crew, the current Bishop of Norcia, Renato Boccardo ,61 (someone who is violently against the Tridentine Latin Mass). These two were always seen sitting side by side at Papal ceremonies that did not call for them to be on the altar.
Don't be surprised if both of them are gay.

An interesting observation if all these Rome priests who are revealed to be active homosexuals....when did they begin their seminary training? In the mid-late 1960's early 1970's when the radical "deforms" of Vatican Ii were coming in.
And who was the Pope who authorized the wholesale disgarding of all Catholic tradition, the Mass, and the traditions and monastic disiplines of religious Orders and seminary formation? Paul VI.
And which Pope had strong gossip/rumors made about him that he was gay while he was still just a monsignor, and who two years before his death as Pope had to make a speech during which he added afew sentences refuting rampant rumors that he was gay...an embarrassing defense against rumors which would never have surfaced if there wasn't a basis somewhere for it.
Take a guess who he was.
I'll give a hint.
He really did only 1 good thing in his whole pontificate, and that was an encyclical letter which provoked such anger among radicals that he never wrote another one.

I have NO IDEA if he was gay but I believe he was a Homosexual, yes.