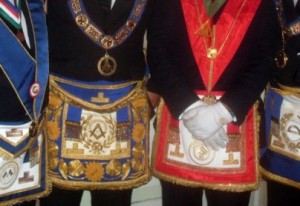 (Brussels) Regarding   immigration everyone has said each to his own. The difference, however, is that some can do it in a big way in the mass media, others only in the limited range of a formally borderless Internet.
Now the Masons have spoken out. 28 Obediences have signed an official statement and throw a revealing light through this rare openness on the phenomenon now paralyzing Europe of borderless and irregular immigration. A phenomenon that makes the growing gap between elites and people visible.

Lodges unite from Turkey to Portugal, from Italy to Ireland and Poland

The goal: "Undermining supporting elements such as homeland, identity and nation" 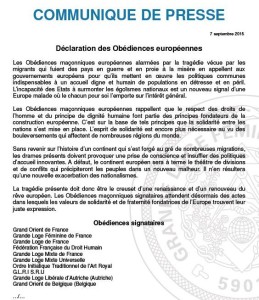 Freemasons and Immigration
A singular coincidence? It may be doubted. "The agreement has one objective: The undermining of supporting elements of our community such as homeland, identity, people," said Corrispondenza Romana.
The Lodges statement was publicized ​​by Médias-press made ​​in France.
The official lodges have justified the demand for unbridled immigration with overcoming "national egoism" and the primacy of undefined "general interests", which would require an "innovative welcome policy".
The lodges are not only declaring noble intentions, but issue a warning. Should  governments not   open their borders and therefore not follow the Masonic proposals, there would be "divisions and conflicts" and to a "resurgence of nationalism" in Europe.

The lodge brothers (and sisters) are not relying  on their demand for the Judeo-Christian roots of Europe, but to the "respect for human rights," on which, say the Freemasons, the European Union bases  the "values ​​of solidarity and brotherhood."  The foundations of Europe are sufficient for the lodges only  with the French Revolution back to its Declaration of the Rights of Man and of the Citizen of 1789 which is the basis for the Universal Declaration of Human Rights of the UN in 1948.
The European Masonic obediences do not say how  squaring the circle is to be achieved, as the interests of refugees and the increasing number of swelling migration flows are to be reconciled with the interests of the peoples of Europe. The Freemasons are content publicly to define a fixed point as a conditio sine qua non: "Immigration above all," said Corrispondenza Romana.
Text: Giuseppe Nardi
Image: Corrispondenza Romana / Médias Press
Trans: Tancred vekron99@hotmail.com
Link to Katholisches....
AMDG

In the Passion, Pontius Pilate offers the crowd a choice to set Christ free, who is innocent, or Barrabas free who was a murderer. The crowd chooses to release Barrabas instead, who then goes free while Christ is sentenced to death.

More recently, the telegraph show a video made by John Hirst, a man convicted for chopping his landlady to pieces with an axe, celebrated the decision in England to allow convicted felons, that is,, murderers, rapists, pedophiles, arsonists and so on the right to vote. His delight was fueled by enjoying a bottle of champagne and a marijuana cigarette. He seemed particularly enthused about the fact that these evil men would be free to exercise their voting rights, as if by some additional madness all the prisons were opened and these men suddenly belched forth from the prisons where they were kept to spread their wickedness through the world unhindered by walls and bars.

It's difficult not to see the parallels between these two events, or the diabolical nature of Mr. Hirst's glee as he ridicules the well-to-do politicians who tried to keep himself and his fellow felons from voting. So, once again, as it was in the time of Jesus Christ, it is democracy at work.