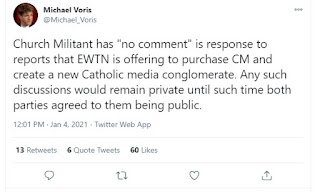 Edit: the following is a video by a former Society of Saint Pius X priest who has really lost his way but presents himself credibly here.  He's the one falsely accused of running off to Mexico to open up a tattoo parlour after leaving the SSPX.  Clearly, we don't endorse this man's total agenda, but what is valuable about his contribution is that his testimony challenges the way Church Militant will distort and lie about a person to promote an agenda, just like the "real" news does.
This individual is even more difficult to listen to than Skojec, but he makes some fairly damning statements about Michael Voris' integrity in general and the way Church Militant does business, and if you're a faithful Catholic, you should start to look at CMTV a little more critically and even abandon it altogether as a source for any news.
Voris lies about his seminary formation. He didn't have his crisis in the seminary as Voris claims.  Voris lies about details in this man's life to sensationalize in part, and just pure laziness in the other.
We'd also like to invite this wayward priest to return to the SSPX and take his punishment by going into monastic seclusion and pray for his own salvation and the success of his order in saving souls.
AMDG
Posted by Tancred at 2:50 PM 24 comments:

Was McCarrick a Communist Agent?

(Rome) While the Pope Francis' summit on sexual abuse of minors is taking place in the Vatican, new revelations about the ex-homosexual cardinal and ex-priest Theodore McCarrick have become known.

According to Vatican planning, the Abuse Summit wants to avoid the main motive of sexual abuse: homosexuality [Let's not try to be neutral about this scourge, call it aberrosexuality.] At least 80 percent of all abuse victims of clerics are male adolescents 11 and up.

Now, new revelations surrounding homosexual McCarrick, whose case set the abuse summit  rolling, became known. Besidss this, there is a connection between homosexuality and the summit. This is especially true because of the great influence that McCarrick exercised by his offices, his rank, the Papal Foundation initiated by him and not least by the Sodo-Cliques.


"The Communists have been incredibly successful in infiltrating the church. McCarrick was one of her men. "

Voris is convinced that the Abuse Summit is a major diversionary tactic of homosexual clerics in the Church. For decades, the same cliques have covered McCarrick, who - following Frédéric Martel's statement in his new book "Sodoma" - was one of the heads of the homosexual network. 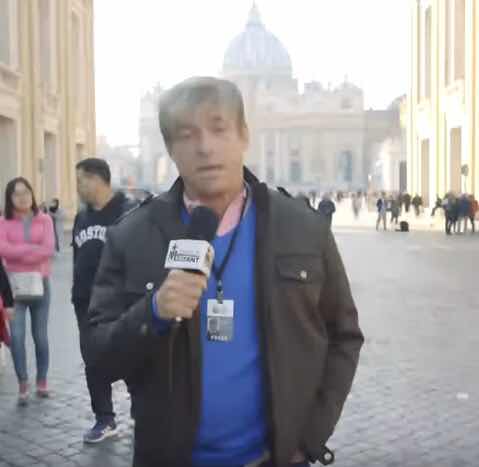 Church Militant relies on information from former communists who "played a key role" after the Second World War in building a secret network of communist training and education centers in Europe. Their information "implies" a direct involvement by McCarrick, Voris said.

According to him McCarrick was in his early years, "secretly trained in Europe by Soviet Communists" with the aim to implant him as a communist "in the heart of the Church.”

When Stalin took control of the Soviet Union in the 1920s, it was one of his plans, so much is certain, to weaken the influence of the Catholic Church, if not entirely eliminating it. This was "part of the communist world domination plans that Our Lady warned in Fatima in 1917.”

A central point of the plan, according to Voris, was the "infiltration of seminaries with young men who were to work to undermine the Church's moral code".

This strategy was confirmed by Bella Dodd (1904-1969), a senior member of the US Communist Party (CPUSA). She herself, according to her own information, placed 1,100 men in US seminars. The teacher Dodd was a leading communist activist and trade unionist in the 1930s and 1940s. She began to withdraw herself internally  from communism in the course of a purge of exclusion from the party in 1949. Under the leadership of Fulton Sheen, then Auxiliary Bishop of New York, she returned to the Catholic Church and became an opponent of dialectical materialism.

Dodd revealed that according to Stalin's order, "immoral men", especially homosexuals, were to be introduced to the Church.

"Dodd's testimony is important because it not only reveals the infiltration plan, but also the connection between communism and homosexuality in this plan," which was not limited to the US.

When the Iron Curtain fell in 1989 and the Soviet empire collapsed in 1991, information from the KGB became known that the Polish seminaries had been infiltrated with hundreds of Communist agents. "The reality that the Church was besieged from within for decades shook Polish Catholics to the core," Voris said. At the same time, Catholics in Lithuania had to realize that their "hierarchy was interspersed with Soviet agents."


"Liberation theology had been carried to Latin America by KGB agents to undermine the Catholic Church through the Jesuit Order."

To train young men who would not be noticed in their home countries, various training centers were set up. One, according to Church Militant, existed in St. Gallen, Switzerland, where McCarrick was around 1950. He came from a poor family. The father had died young and the mother struggled with simple work to make ends meet. 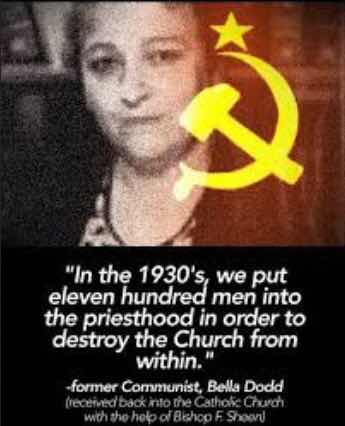 In 2001, McCarrick told the New York Times about his time in Europe right after graduating from college. He had "no plans for his life" back then. "A friend" invited him to Switzerland, where he stayed for a whole year, without saying where he had the money for such a trip and the long stay. Something that at that time only wealthy could afford.

That McCarrick was in St. Gallen is known by James Grein, one of his sexual abuse victims. Church Militant points out that one of the Communist training centers in the West was located in Sankt Gallen, where recruited young men were trained, among other things, to be introduced to the Church.

McCarrick told the New York Times he found his priestly calling during his time in Europe. Voris:


"McCarrick would have been the ideal candidate for Soviet recruitment: a fatherless young man with homosexual inclinations and no particular ambition in life. It was a perfect match for the pattern, especially the homosexual dynamic, which made it easy to control it by blackmail. "

The fact is that McCarrick entered the seminary of the Archdiocese of New York on his return to the United States and was consecrated there in 1958.


"If McCarrick was actually recruited as a Soviet agent to undermine the Church, he fulfilled his clients' wishes perfectly."


"He rose quickly and spread moral, doctrinal and spiritual confusion on every level, inflicting injuries - not just his victims among the seminarians and other young men."

Indeed, if McCarrick had been a communist agent steeped in Marxist thought and a socialist worldview at an early age, that would explain a great deal how his way in the Church in the United States was struck by his rise to power..

The so-called "Social Justice" wing in the Church of the United States became a leader under McCarrick who is one of its central figures. Under US President Bill Clinton, he was even able to extend his influence to the government by sitting for three years in the Foreign Affairs Committee on Religious Freedom from 1996 onwards. From 1999 to 2001 he was also a member of the US Commission for International Freedom. The membership in both committees enabled him numerous foreign trips. During a ceremony, Clinton joked that these constant trips abroad were more for diplomats than archbishops.

While Benedict XVI. Restricts McCarrick's room for maneuver and imposed sanctions on him for the strong suspicion of sexual misconduct, Pope Francis rehabilitated him and made him his special envoy to the Communist People's Republic of China. As such, McCarrick was involved in preparing the secret agreement between the Holy See and Beijing, signed in September 2018, and caused critic s to call him a "seller of the Chinese Church."

The proof of Michael Voris is thin, which he knows himself. But he is right in pointing out that the evidence is too numerous to dismiss the revelations. McCarrick had "routinely bribed" and paid Roman curial officials with "benefits and probably cover-ups".


"He has been instrumental in propagating social justice that has dominated the life of the Church in the United States for decades - a movement that hides behind a language of charity, but regularly reveals its left-wing policies and its links with socialist organizations of which many are offshoots of Saul Alinsky. "

Voris also links Saint Gallen with the secret circle of high and highest progressive Church representatives founded by Cardinal Martini in the 1990s, which played a central role in the election of Pope Francis. The association of Church progressive to political left is obvious. The decidedly political action of Pope Francis confirms this. In fact, his election not only brought with it the immediate lifting of the sanctions imposed on him, but also granted him unprecedented influence in the Vatican.

Voris concludes from his information and agrees that McCarrick's case is not only closer to sexual abuse, but much broader. His entire influence on the Church in the United States and on the Universal Church should be scrutinized - and his year in Switzerland.

Edit: a disgrace to the Chair of Peter?  Wow!  Has there been an apology to John Vennari, Catholic Family News, the Angelus, Rorate Caeli or others who've been legitimately critical of this pope in the past?

To our knowledge they didn't apologize about the SSPX, either.

We have to say, going after these groups doesn't seem to have hurt them much.

[ChurchMilitant] At exactly 4:49 p.m. Rome time, February 12,1931, a remarkable thing happened. For the first time in history, a mass audience actually was able to audibly hear with their own ears the actual voice of the Holy Father — less than a hundred years ago in a 2000-year-old Church. The very first radio broadcast, invented by Italian scientist Guglielmo Marconi, went out over the airwaves with the voice coming from the mouth of Pope Pius XI. Things were about to change forever.

Fifty years earlier in 1870, the Church had officially announced the dogma of papal infallibility at Vatican I. The dogmatic announcement was a source of some concern — and not just by enemies of the Church.

Before he died 20 years after Vatican I and 30 years before that first radio broadcast, Bd. John Henry Newman looked down the road and worried that regular Catholics would misconstrue the dogmatic pronouncement and begin to assign, in their minds, an authority to the Pope that he does not possess: common infallibility.